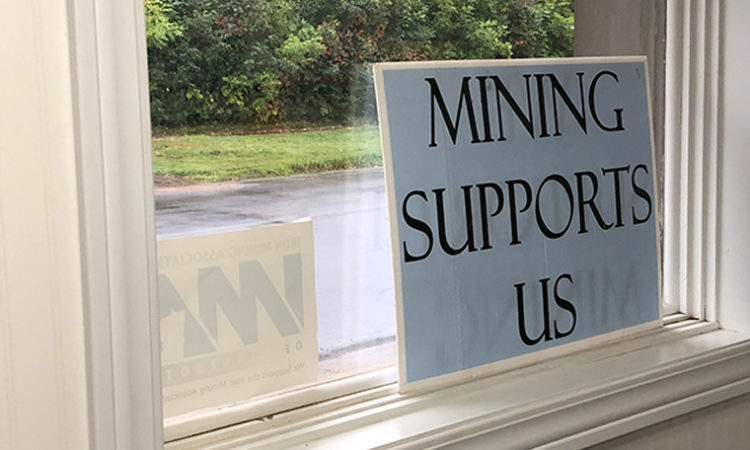 A sign promoting mining in a window at Lind Industrial Supply. ( Photo by Gregg Aamot/MinnPost)

On the Iron Range, Small Businesses are Building Off of Minings Success

The sector includes companies that make everything from massive conveyor belts to radiators and air coolers to replacement parts for machines that crush ore to special tools used by miners.
By Gregg Aamot
October 04, 2018

Art Lind has been involved in the mining industry in various capacities since the early 1960s, when he went to work for a company that repaired conveyor belts used by the mines on the Iron Range. He once worked on a survey crew that laid out the foundations for two taconite mines. Eventually, Lind got into sales and management for a Hibbing company, where he worked for 26 years before branching out on his own and founding Lind Industrial Supply, a parts and equipment distributor, which he runs with his son Roger.

Art Lind has been around long enough that the ebbs and flows of the Range economy, so tightly linked to the fortunes of the mines, have never dissuaded him.

“We survive,” he said when asked how his company responds to economic downturns. Yet as much as 95 percent of the business’s income comes from the products it sells to the mines. “It’s our lifeblood,” Roger Lind said.

And these days, business is good. A mining downturn that began in 2015 because of low prices for ore and steel has begun a reversal with the reopening of several mines. It’s not clear just how many miners and others have returned to work, though Vice President Mike Pence, in a visit to Duluth in August, put the number at 2,000.

Whatever the precise figure, businesses and economists agree that the Iron Range – and the network of small businesses that serve the mines – is doing better.

According to the Iron Mining Association of Minnesota, a trade group that represents the mines and about 200 related businesses, the mines employ about 4,500 workers. Another 11,500 workers, according to the association, are employed indirectly – in the manufacturing, construction, engineering and other firms that serve the industry. An oft-cited 2012 study by the University of Minnesota-Duluth found that each mining job generates another 1.8 jobs in other sectors.

The mines that are operational on the Iron Range stretch from Keewatin, where U.S. Steel has a taconite mine, to Babbitt, the site of Northshore Mining. The cities and towns along that 100-mile stretch – many of them just a few miles apart, developed along with the discovery of iron ore in the late 1800s – seem to blend together. For drivers on Highway 169, the towns emerge and then disappear in a seamless stretch of trees, their leaves just turning colors, and streams and lakes. Several mines that scaled back production or went idle a few years ago – including those near Keewatin, Mountain Iron, Eveleth and Babbitt – are up and running. United Taconite is building a $75 million plant near its Forbes site. And, of course, the much-maligned Essar Steel Project – a mine under construction near Nashwauk that fell into bankruptcy – holds the long-term promise of more jobs for the region.

Manufacturing has a smaller imprint on this region than it does in more agricultural parts of Minnesota, but much of what it does have is related to the natural resources of the region – especially paper production and mining. “(Manufacturing) is really like nothing that you find in other parts of the state,” said Erik White, an economic analyst for the state Department of Employment and Economic Development. The sector includes companies that make everything from massive conveyor belts to radiators and air coolers to replacement parts for machines that crush ore to special tools used by miners.

A recent report published by DEED shows that manufacturing provides about 8,500 jobs in the agency’s northeast region – about 5.9 percent of the employment base. 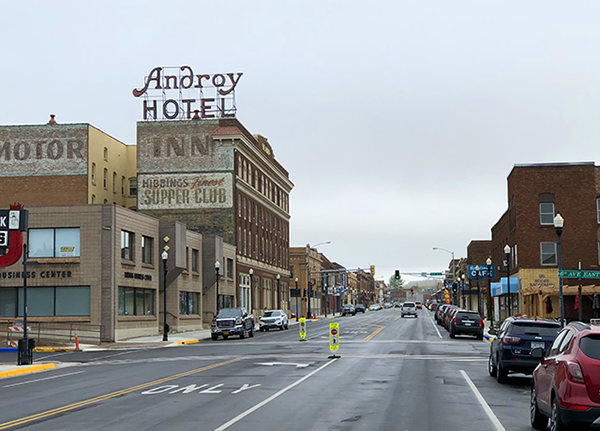 Roger Lind: “Hibbing is an old town, but if you drive around, you see a lot of new cars and trucks; those are signs that things are going well.” (Photo by Gregg Aamot)

One small custom manufacturer, Furin & Shea Welding and Fabricating, sits just off of Highway 169 in the southeast corner of Hibbing, tucked into an industrial park. On the day I visited, two signs sitting on the lawn in front of the business proclaimed: “We Support Mining. Mining Supports Us.” (The sign is part of an Iron Mining Association campaign to promote mining on the Iron Range.)

The company designs and builds an assortment of products that are needed in the mines: metal chutes, storage containers, conveyors, sump pumps. It’s a “job shop” that takes special orders, Perry said, rarely making the same piece of equipment more than once. The company also sells some industrial products.

Like Lind Industrial Supply, Furin & Shea relies heavily on a healthy mining industry; as much as 75 percent of the company’s business comes from its work with the mines, according to Perry.

“We’d like it to be more like 50-50, but we have not gotten it to that point, largely because of our location,” he said. While the company also makes equipment for the pulp and paper industry and does some work for businesses outside of the Iron Range, the mines remains indispensable.

Perry said Furin & Shea employs about 25 people and has aspirations to hire another 10 – if it can find the workers. Recently, he visited community colleges in Hibbing and Brainerd in the hopes of recruiting newly trained welders. “(The local economy) is probably running along better than it has in a lot of years,” he said. “We’re very optimistic about how things are moving now.” Perry attributes some of the turnaround to policies that reversed “steel dumping” – the selling of steel at artificially low prices – by other countries.

Perry said he has “been around the mines all of my life.” He knows the engineers and executives at the mines and serves on the board of directors for the Iron Mining Association. Also like the Linds, he’s in it for the long haul, grateful for the current recovery – and realistic about how long it can last. “(The Iron Range) can run in waves,” he said. “It can run at a high point and then it drops down. It’s always done that – gangbusters for five or six years and then one or two slow years. It’s like riding the wave.”

In Art Lind’s office in the back of his business, a mounted deer head hangs on the wall near his desk. Thick binders with information about the mining industry and the equipment the company sells line a bookshelf. For a novice to the Range like me, the Linds recommended one of the books on the shelf – “Seven Iron Men,” an account of the brothers who found iron ore on the Range.

Mining’s legacy is all around them. The company’s office and warehouse sit just a few blocks north of downtown Hibbing, where city hall and the Androy Hotel, marvelous buildings that hark back to mining’s booming past, still stand. (The hotel is now an apartment complex for seniors). A few blocks north of Lind Industrial Supply, meanwhile, chipping sidewalks and street lamps are the only remnants of a neighborhood that was moved decades ago to make way for a growing open pit mine. When miners near the city explode rock formations with dynamite, the windows at the company shake. 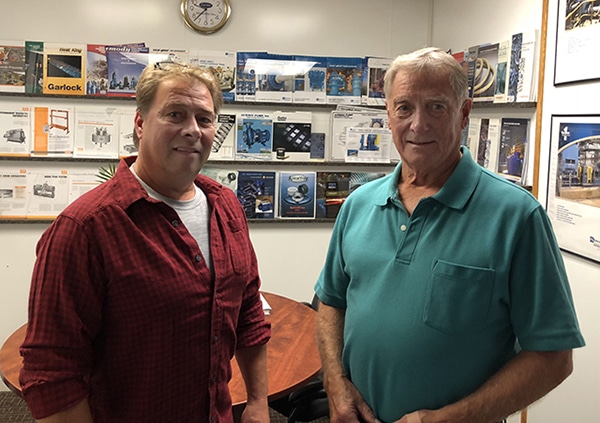 Roger Lind grew up in Hibbing and graduated from high school in the 1980s. After a few years of college, he went to work for a company that makes cooling systems for the mines. Eventually, he got into sales for Charter Inc. (where his dad worked) and remained in Hibbing, which has a population of about 16,000, confident that he could make a living in the mine economy. He joined his dad at their distribution business in 2005.

He is in regular contact with the mines, making sure they have the equipment that they need. Slurry pumps, cyclones, magnetic separators – all of that equipment is crucial to the iron ore concentrating business. Sometimes, if the need is acute, Roger Lind will arrange for a local truck driver to haul a load of equipment that the Linds store in a warehouse on their property.

Despite the good times, however, the volatile nature of the regional economy is never far away.

When work began on Essar Steel Minnesota, a mine under construction near Nashwauk on the western edge of the Range, the Linds sold the project 78 slurry pumps and hoped for more business down the road. (Slurry is a thick, sludgy liquid formed in the mining process). Then the project fell into bankruptcy. (Mesabi Metallics, the company that now owns the project, plans to continue construction.)

Such fits-and-starts are nothing new, of course, and won’t dampen what has been a solid stretch for small companies here.

“Hibbing is an old town, but if you drive around, you see a lot of new cars and trucks; those are signs that things are going well,” Roger Lind said. People feel better. Asked about other economic drivers on the Range, he added: “I really can’t speak to anything but mining. It’s the sole driver right now.”