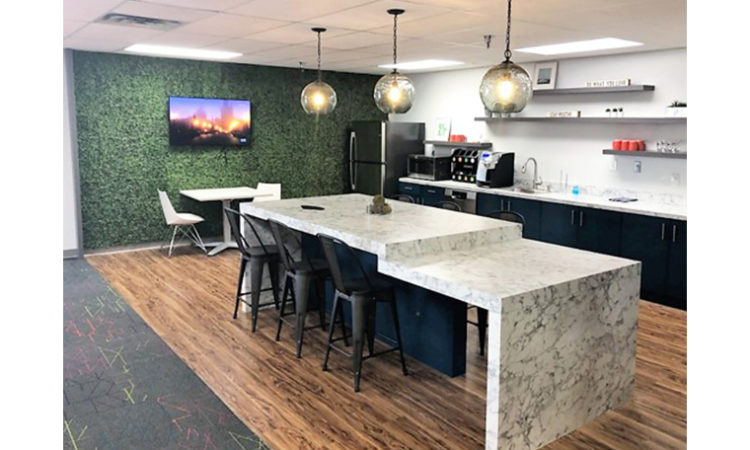 A 'Workonomy Hub' in Irving, Texas. Office Depot this week is opening a similar co-working space in the Twin Cities.

The Chanhassen store has 5,500 square feet of space dedicated to its Workonomy Hub.

The effort is less than a year old. Boca Raton, Florida-based Office Depot Inc. debuted the first Workonomy Hub outpost in August 2018 in Los Gatos, California. Along with Chanhassen, the chain is opening co-working spaces this week in the Chicago, Houston, Denver, and Orlando, Florida, markets. Chanhassen is one of just eight Workonomy Hub locations now open in the U.S.

In the grand scheme, it’s still a small experiment; Office Depot has about 1,350 stores.

“Technology has dramatically changed the way people conduct business today and Office Depot is uniquely positioned to leverage our internal assets, retail space, and omni-channel platform to help our customers succeed in their professional endeavors,” said Gerry Smith, CEO of Office Depot, in a statement.

Commercial real estate firm Cushman & Wakefield Minneapolis-St. Paul has been tracking the local co-working market. At the end of the second quarter, C&W tallied 1.2 million square feet of coworking space provided by about 40 different operators across the Twin Cities.

The Riveter, a Seattle-based co-working concept that focuses on women, just opened in the Twin Cities last week.

On the same day that Office Depot announced the expansion of its Workonomy Hub, Houston-based commercial real estate owner and developer Hines unveiled Hines2 – co-working-styled spaces in its buildings. Hines is rolling out the new concept in one building in Houston and another in Salt Lake City.

Hines2 spaces will only be located in buildings owned by Hines and are meant to be an amenity for tenants who already have leases in those buildings. Hines spokesman Mark Clegg said that there are no immediate plans for such a space in the Twin Cities.