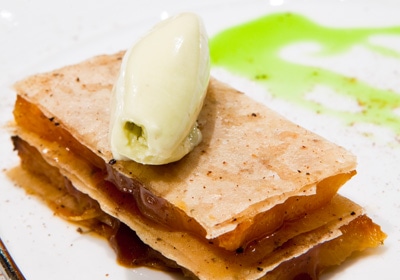 Fans of Heidi’s will recognize the sweet potato beignets. At the original restaurant, the barely sweet pastries were served with crÃ¨me Anglaise and crispy sage.

At the new Heidi’s, they sit—deep fried but pillowy—on a plate of bourbon-rich rice pudding. The result is a deeper flavor, a more developed and refined dish.


Like the dish, Heidi’s itself has moved on and gotten better, despite a fire last year that destroyed its first incarnation. The desserts cap a creative dining experience that would be a travesty to end with a molten chocolate cake straight out of the 1990s.

If your meal starts with chef Stewart Woodman’s “Bennie”—truffle, huitlacoche (AKA corn smut), and a sous vide, hominy cream “egg” that collapses in a savory ooze when you raise your fork to it—it should end with something just as delicate and balanced. Like Heidi Woodman’s perfectly tart frozen soufflÃ© made with the Japanese citrus yuzu. It’s refreshing not just on the palate, but also in a dining scene where dessert can feel like a compulsory second act; the chef trots out something chocolatey and something lemony.

Woodman does make a frozen chocolate mousse with crumbles of peanut butter. But her caramelized pineapple Napoleon, served with basil ice cream and scented with allspice, goes head to head with chocolate sales.

A yogurt cake flavored with rosewater and honey surprises and delights diners: “There was a table here Friday night who ordered one to share and then ordered another after,” Heidi Woodman says.

It’s the creation of a pastry chef who won’t let dessert play second fiddle. “I am the chef who is making the sweet course,” she says.