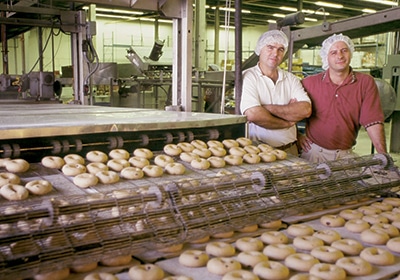 Michel Rouache, CEO of National Choice Bakery, felt like someone had given him a swift, sharp shove.

Filing for bankruptcy will do that to you.

Rouache and co-owner Shimon Harosh have run National Choice Bakery, formerly Twin City Bagel, out of South St. Paul since 1990, for the most part with holes only in their product, not their business. The business came out of the gate strong, reporting first-year sales of approximately $1 million. It now makes a wide variety of bagels for several grocery brands and has revenue that exceeds $34 million. It employs nearly 350 people, with around 240 in Minnesota.

But in 2008 things got tricky. The brothers had taken out a $12 million loan to expand operations in South Carolina. While Rouache and Harosh say the business, minus the depreciation, was always cash-flow positive, for short-term liquidity reasons they decided to file for Chapter 11 protection. This was in September 2011.

“The first thing we did was to notify our customers and employees of what was going on,” Rouache says. “We shared our financial records so everyone could see how we were doing. We’re fortunate because all of our customers—and we’re talking big, brand-name customers, national companies—stayed with us.”

The process forced the pair into an existential mind-set.

“At that moment, as a human, you have to ask if you still want to keep the operation and your vision alive,” says Rouache. He and Harosh had many heart-to-hearts and decided they did. And they had plenty of support out on the floor. “What was fascinating was seeing the people who came forward and said, ‘You know what, we’ll get through this.’ We actually got even stronger.”

In the year they were in bankruptcy the two carefully examined their business. “We looked at everything, from operations to human resources. Every aspect. And things got even tighter than before. We were able to get each individual more focused and show more commitment to [their job],” Rouache says. “The advice that I would give to anybody is to just put everything on the table. If you don’t, people start to wonder, and then you are lost.”

That and having a good lawyer by your side. Harosh and Rouache brought in Mike Meyer of Ravich and Meyer in Minneapolis to negotiate terms with lenders. Meyer was convinced that the company could survive.

“Shimon and Michel came to me and showed me projections, told me how they thought the business was going to work; all of that was the basis for the reorganization plan, and they performed admirably. They are very good businessmen, in my opinion,” Meyer says.

And it all had a happy ending, as they negotiated a settlement with their bank and paid all their creditors in full, which Meyer says doesn’t happen often. They’re with two new lenders and announced in September 2012 that they had exited from bankruptcy. Revenue is healthy again and the brothers are optimistic about their financial outlook.

“The main thing is the communication part,” Rouache says. “Without that, you’re losing the path of information, people start questioning you, things can fall apart. But if people know you and know in real time what’s going on, then you can keep it together.”