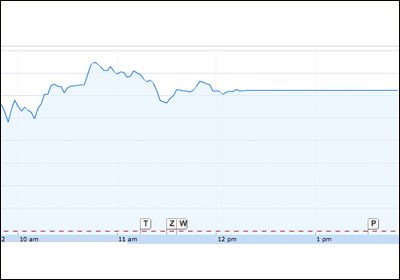 The Nasdaq exchange—on which shares of Minnesota companies such as C.H. Robinson, Buffalo Wild Wings, and Fastenal are traded—temporarily ceased trading on Thursday.
September 01, 2013

Trading came to a screeching halt mid-day Thursday on the Nasdaq stock exchange.

Nasdaq is the second-largest U.S. stock exchange and the shares of many of Minnesota’s largest public companies are listed there.

Nasdaq notified traders around 11:00 Central on Thursday that it was “halting trading in all” stocks listed on the exchange “until further notice,” according to media reports. The problem stemmed from a technical glitch, and the U.S. Securities and Exchange Commission reportedly said it was monitoring developments throughout the day.

Traders were reportedly scrambling mid-day Thursday to assess the impact of the outage on the exchange, which, in addition to major Minnesota stocks, is also home to outstate giants like Apple and Microsoft. The disruption occurred shortly after some companies, including Patterson, released their quarterly financial results.

Mary Ann Jackson, director of investor relations for Apogee, which manufactures windows and other glass products, told Twin Cities Business early Thursday afternoon that the company was in a “wait and see” mode regarding what impact the disruption may have, adding that she was receiving updates from Nasdaq regarding its progress toward reopening the exchange.

Thursday’s episode was an unusual disruption to the securities market, but it is only the latest of a series of high-profile glitches to hit U.S. stock market trading, according to a Reuters report. The incidents include the so-called “flash crash” in 2010 stemming from the Facebook Inc. initial public offering, and earlier this week, a technical problem at Goldman Sachs led to erroneous orders being sent to U.S. equity options markets, Reuters said.