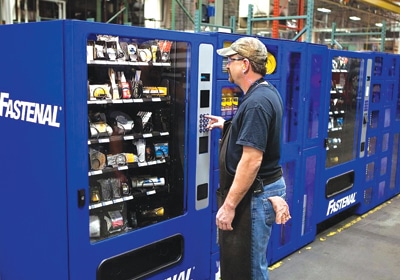 One of the fastest-growing components of Winona-based industrial supplier Fastenal Company’s business is vending machines filled with essentials that its manufacturing, construction, and other industrial customers need—from safety glasses, work gloves, and coveralls to paints, aerosol sprays, and power tools.

Companies stock the FAST 5000 vendors based on what employees need on the job. To make a purchase, workers scan identification cards or enter a code, allowing management to track usage.

“It helps organizations regulate and cut product consumption because it makes employees accountable for what they use,” says Russ Rubie, vice president of the Fastenal division that oversees the vending program. The machines communicate over the Internet, allowing Fastenal employees to track inventory in real time.

Bismarck, North Dakota-based DMVW Railroad has had a Fastenal vending machine installed at its headquarters for more than three years. Purchasing Manager Glen Shipman says it has helped reduce expenditures by at least 75 percent.

Shipman says the machine makes it easy for the company to set volume limits for employees on specified items such as gloves and coveralls. Besides a $300 annual maintenance fee, the company pays Fastenal only for what is sold, which eliminates inventory overhead.

“I don’t have to worry about regulating inventory; the machine does it for me,” Shipman says. “It couldn’t be a better system.”

Rubie says Fastenal has installed more than 10,000 industrial-scale vending machines since 2008. There are now more than 200 employees and 13 regional “build centers” dedicated to configuring, testing, and installing them.

In the last quarter of 2011, the business accounted for 16 percent of Fastenal’s sales—double the contribution it made a year earlier. This year, in the first quarter alone, Fastenal installed more than 4,500 machines. “We expect to install our next 10,000 machines within the next nine to 12 months,” Rubie says.

In case you’re wondering, there is little of that lunchroom frustration when purchased items don’t actually vend. Sensors at the bottom of each Fastenal machine confirm that the desired item has been released; if not, it tries again, then notifies Fastenal and the host company. If only Doritos came out that reliably.