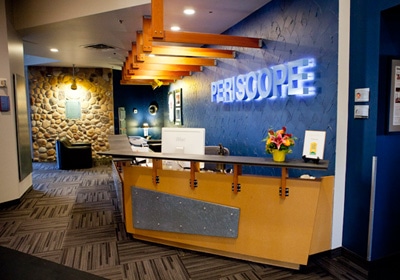 Minneapolis-based ad agency Periscope said Tuesday that it has added 123 new employees thus far in 2012—raising its total headcount to 475.

The growth has been driven in part by an expansion of services for existing clients, like the addition of retail branding, strategy and analytics, and loyalty marketing services, as well as the addition of new clients.

Lori Sharbono, vice president and director of business development, told Twin Cities Business on Tuesday that, because the firm is independently held, it’s able to offer in-house resources that are “unique in the industry,” including a photo studio, pre-press operations, an events team, a retail branding unit, and the ability to both develop and package marketing materials without using external vendors.

“We believe our responsibility to our clients is creating content that consumers welcome into their lives, regardless of what form it might take,” she added.

The company today operates four offices. It employs 410 in Minneapolis, 30 in Hong Kong, 30 in New Delhi, and five in Toronto. The vast majority of the 123 new hires this year have occurred in Minneapolis, Sharbono said.

It recently landed an account for three liquor brands from Minneapolis-based Phillips Distilling: UV Vodka, Prairie Organic Vodka, and Revel Stoke Spiced Whisky. (According to a report by Advertising Age, advertising for the brands was previously handled by two other Minneapolis agencies: UV Vodka by Olson, and Prairie and Revel Stoke by Mono.)

In conjunction with its employee growth, the company has also experienced an increase in revenue. Periscope is Minnesota’s second-largest advertising agency based on revenue, which totaled $51.5 million in its most recent fiscal year—up more than 10 percent from $46.5 million the previous year. (Olson is the state’s largest ad agency.)

On Tuesday, Periscope launched a new website aimed at expressing its tagline, “Do things people love.” In a news release, the company described the site as “visually dynamic, simple, intuitive, and engaging to visitors.”

To celebrate its recent growth, the company also doled out a $100 bill to each of its employees and encouraged them to “do something they love.” Stories documenting employees’ innovative uses of the money will be told on the new website, the company said.

President and CEO Greg Kurowski said in a statement that the company has “never spent much time talking about our own achievements, because we’ve been busy doing things our clients love.”

“But now it’s time to take our own shackles off and start sharing our success and pride with the rest of the world,” he said.