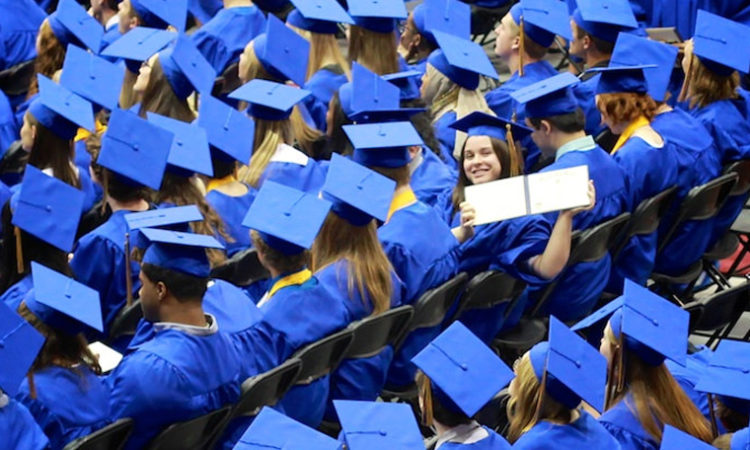 More MN Students are Graduating, but How Many are Actually Ready for Jobs or College?

In a letter dated Jan. 10, U.S. Secretary of Education Betsy DeVos approved Minnesota’s new federal education accountability plan — the Every Student Succeeds Act, commonly known as ESSA. An initial draft had been submitted for consideration in September, but it had to undergo a few revisions before the feds agreed to sign off on it.

Revisions complete, the U.S. Department of Education highlighted a couple of “unique elements” from Minnesota’s plan in a press release. This included calling attention to Minnesota’s aggressive graduation goal: “to ensure that by 2020, 90 percent of all students will graduate from high school in four years.”

This goal was actually established in 2012. And it includes a subgoal of ensuring that no student group — whether defined by race, low-income status, or any other category — falls below an 85 percent graduation rate by the year 2020. In 2012, the statewide four-year graduation rate for all students was 77.9 percent. By 2016, that number had climbed to 82.2 percent.

Regardless, establishing high graduation expectations seems essential to ensuring the state has a more equitable public education system. However, gains on this front are often celebrated — in the media and by state education officials — out of context. While graduation rates are on the rise, proficiency rates in math and reading have remained relatively stagnant. And for some student groups, proficiency rates have actually decreased at the same time that their graduation rates have increased.

To be clear, the state’s ESSA plan does have specific goals around academic growth and proficiency. But the historical disconnect between these two data points has some worried that efforts to advance such an aggressive graduation rate goal may continue to detract attention from a more pressing dilemma: How valuable is a high school diploma if it offers no assurance that graduates are entering the workforce or postsecondary system well equipped with a solid academic foundation?

“Certainly, you want to see students graduate from high school. It’s an important milestone. But I think, at the same time, we need to be honest with students and their families in what that means, in earning a [high school] diploma,” said Jim Bartholomew, education policy director for the Minnesota Business Partnership. “If we’re giving them a diploma knowing they’re not ready, we really are lying to them and their families.”

All of these data points are accessible via the Minnesota Report Card, maintained by the Minnesota Department of Education (MDE). However, the graduation rate trend line and the proficiency rate trend lines can only be viewed in isolation of each other. And here’s where it’s easy to lose sight of stagnant — or even declining — proficiency rates when graduation rates appear to be improving.

Looking at the school level, in many cases, the disparities between these two trend lines become even more alarming. For instance, Minneapolis Public Schools’ Roosevelt Senior High hit an 80.4 graduation rate for Hispanic students in 2016, up from 42.5 percent in 2013. Reading proficiency rates for this same student group, however, declined from 21.3 percent in 2014 to 4.4 percent in 2017.

These findings are not unique to schools in the Twin Cities. Similar disconnects abound in state data. It’s just not an easy thing to visualize when it requires adding filters and digging through various data fields. For instance, at Willmar Senior High 84.4 percent of Hispanic students graduated in 2016, up from 60 percent in 2012. Yet only 24.6 percent tested proficient in reading that same year, down from 38.3 percent in 2014.

It’s worth noting that these data points, alone, don’t account for nuances like increasing English learner student populations, any changes in standardized state tests, or the number of students choosing to opt out of taking these  tests. In fact, MDE notes that “new, more rigorous achievement standards” were implemented in 2011 for math and in 2013 for reading. But the fact that, even after these recent changes, graduation rates can continue to climb as proficiency scores decline signals that graduation rates, alone, are not a very reliable indicator of student success.

“I think that this whole issue of graduations is a workaround to the proficiency issues that we have been unable to solve or resolve,” said Jeffrey Hassan, executive director for the African American Leadership Forum.

In a report his organization published this past summer — an undertaking supported by The Minneapolis Foundation — he and his colleagues combed through state data for all public schools located in the Twin Cities — both traditional district and charter — to “document the extent to which the problem exists,” when it comes to proficiency and other measures of student success for African-American students. What they found was  “sobering”: there’s only one school in the entire Twin Cities in which African-American students were more than 50 percent proficient in math, reading and science. And there were only four schools in which this student group was more than 50 percent proficient in reading and math.

“It was very labor intensive to pull all this information,” Hassan said. “All of the public entities will tell us, including MDE: ‘Well the information is available on our website.’ But you pretty much have to be an expert to figure out how to navigate and get to the information you’re actually looking for.”

Getting more high school diplomas in more students’ hands certainly matters. At a basic level, graduates are able to access higher paying jobs. That being said, many middle- and high-income jobs that require some level of postsecondary education will remain out of reach.

This is where lagging proficiency rates end up derailing many unsuspecting students who use their high school diploma as a steppingstone to college. They may approach this new challenge hopeful they’ve been well prepared only to find out their math or reading skills aren’t up to par with the rigor of college courses. Many end up having to take remedial courses — mandatory foundational courses they must pay for that don’t actually count toward their degree.

In 2016, 20 percent of all high school graduates, statewide, were enrolled in developmental education courses during the fall term of the first two years after high school graduation. The average number of developmental credits in 2016 was 5.39. A breakdown of this data set by race is pretty alarming: 15 percent white, 42 percent black, 33 percent Hispanic, 26 percent Asian and Pacific Islander.

Bartholomew says these two data points — remedial course enrollment and postsecondary completion rates — should be prioritized when it comes to measuring how well individual schools in the public K-12 system are serving students.

“I think the graduation rate … is an important data point. But it’s obviously become less important because it’s such an outlier compared to all the other data we have,” he said.

Bo Thao-Urabe, executive director of the Coalition of Asian American Leaders, agrees that a high school diploma offers little assurance that a student is prepared for college. Citing the higher percentage of Asian student who enroll in remedial courses, she said this indicates “something isn’t happening to really prepare them for the next phase of their college career.”

Often, Asian students sail through high school — getting good grades and staying in good favor with their teachers, she said. But, based on what she hears from families, Thao-Urabe says, “Asian-American students feel, in general, pretty invisible in the system” because “their quietness is seen as they’re OK with things.” That can translate into managing to piece together good grades, but struggling on the ACT or on state tests because they didn’t seek out — or weren’t identified — for help in the classroom to ensure they were actually mastering the content.

Dia Yang, the coalition’s education workgroup chair, has been working as an adviser at various postsecondary institutions in Minnesota for the past five years. In her experience working with Asian-American students, she says too many end up graduating from high school with a high GPA but a low ACT score. Then they end up having to take a remedial course — sometimes even more than once — just so they can access a math course or some other course that’s required for their major.

“When they get to that stage, they’re stuck, because they always felt they were very smart in high school,” she said, noting they’ll often try retaking the placement test before enrolling in remedial courses.

“What I know is that what we have right now is not working, and it would take too long to get kids to where we need them to be,” she said. “We would lose generations and generations of kids. It’s scary — the prospect of not doing anything radically different.”