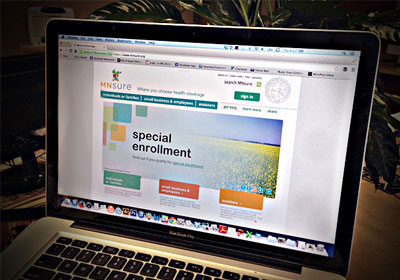 More than 100,000 Minnesotans have signed up for private health plans through the state-run agency.
January 19, 2017

More Minnesotans have enrolled in private health plan coverage through MNsure than any year since its 2013 founding, the state-run health insurance marketplace said Monday.

“Every year MNsure’s enrollments have increased, and topping the 100,000 mark this year is a milestone,” MNsure CEO Allison O’Toole said in a statement. “Minnesota’s health insurance rate is at a historic high of 96 percent, and these numbers will contribute to raising that even higher.”

Those who enrolled in private health plans were a mix of new and returning customers. Enrollment is nearing 189,000 when Medical Assistance—the state’s version of Medicaid—and MinnesotaCare are included.

Premiums for private health insurance plans rose dramatically this year, with average premiums jumping over 50 percent—enough to net the fourth-highest increases in the country—though a tripling of tax credits could keep many families’ premiums at or near last year’s levels.

Sixty-two percent of enrollees are expected to receive a tax credit during 2017 coverage. The average monthly tax credit is $672, or $8,000 for the year. Gov. Mark Dayton is pushing for a 25 percent tax credit for those who don’t qualify for a subsidy, while state Republicans are pushing a means-tested benefit.