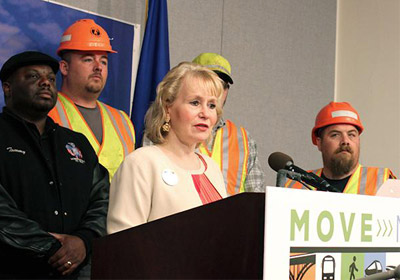 With the support of labor unions like AFSCME Council 5, the Minneapolis Regional Chamber of Commerce, and more than 150 other organizations, MoveMN pushed a nearly $750 million annual package funded by a three-quarter cent metro sales tax and 5 percent wholesale gas tax.
June 08, 2014

After 2007’s I-35W bridge collapse, labor unions and the Minnesota Chamber of Commerce united to help pass the first gas tax hike in two decades, pumping $6.6 billion into state roads and bridges. But that coalition came undone in 2014, as business turned against a $750 million annual funding package—which became one of the legislative session’s biggest failures.

Now, transportation advocates are planning a far bigger 2015 effort—at $6 billion, nearly that bridge-collapse call-to-arms. They are pushing hard to woo corporate figures like U.S. Bancorp CEO Richard Davis, who has worked with Governor Mark Dayton on everything from the Minnesota Orchestra lockout to the state’s recent winning 2018 Super Bowl bid.

Funding the three-legged transportation stool—roads, transit and cycling—will depend not just on charm, but resolving thorny issues like whether the politically volatile gas tax is the best way to fund a massive transportation funding package or a tax on fuel at the wholesale level.

Dayton has made transportation funding a priority if he’s elected to a second term this fall; Minnesota Department of Transportation commissioner Charlie Zelle says of business, “They know that our future in terms of attracting a workforce depends on a solid transportation system. These are folks that are being very smart about our investments, and to the extent there is a business case to be made we have to make sure we communicate that.”


A dollop of efficiency before a flood of spending

Before the 2014 session, MoveMN tried to be the campaign that tied all the transportation pieces together.

With the support of labor unions like AFSCME Council 5, the Minneapolis Regional Chamber of Commerce, and more than 150 other organizations, MoveMN pushed a nearly $750 million annual package funded by a three-quarter cent metro sales tax (for transit) and 5 percent wholesale gas tax (for projects around the state).

However, the Minnesota Chamber of Commerce pushed back on that approach, calling instead for stepped-up reporting of “efficiencies” within the Minnesota Department of Transportation (MnDOT).

Legislators ultimately passed a requirement that MnDOT identify 5 percent in cost savings in its 2015 budget, freeing up around $50 million to be redeployed to transportation projects.

Despite that business win, the $750 million transportation bill never made it close to the floor, say sponsors Sen. Scott Dibble and Representative Frank Hornstein, both Minneapolis DFLers. In the end, lawmakers appropriated about $15 million for cities and counties to repair potholes and spent $113 million on local road and bridge projects.

“What we heard very clearly was: ‘Before we start talking about increasing revenue we need to make real progress on the efficiencies front,’” Graves said.

The 2008 gas-tax hike required efficiencies reporting, he notes, but there has been little-to-no effort from MnDOT until now to find cost savings.

“It is important for our members to have a safe, reliable transportation system—but our members of the business community have been hit pretty hard in this last biennium with new taxes and new workforce mandates,” Graves noted. “Talking about billions more in tax revenues for transportation, it’s not something that they are able to consider in a vacuum.”

Business groups like the St. Paul Area Chamber of Commerce and Minneapolis Regional Chamber of Commerce have historically been powerful advocates for expanded transit for their metro-area members. But both groups backed away from this year’s funding package because of gamesmanship involving the politically risky gas tax.

These days, a per-gallon pay-at-the-pump tax raises too little money to maintain roads and bridges because cars are more fuel-efficient. In an election year, lawmakers instead opted for a fuel tax at the wholesale level, which would rise as fuel prices do.

“I’ll be really blunt: it’s a copout,” Matt Kramer, president of the St. Paul Chamber of Commerce, said. “The wholesale approach isn’t extraordinarily transparent. The cost would be passed on to you and me. It’s our elected officials raising the gas tax without raising the gas tax.”

Dibble responds that businesspeople are levying a “fake argument” against using a gas tax at the wholesale level.

“They talk about transparency, but it is construed exactly the same way as the gas tax,” Dibble said. “They are clearly responding to their big oil or some other narrow interests, for them to stand up and oppose it.”

The Minneapolis Regional Chamber of Commerce was originally on board with MoveMN, but pulled back support when the funding mechanism was announced. Todd Klingel, the Minneapolis chamber’s president and CEO, said they will still push for a major transportation package, but the business community needs to be united on how to pay for the improvements.

Klingel would like to refer back to the work done by the Transportation Funding Advisory Committee (TFAC).

Originally appointed by Dayton, TFAC released a report in December 2012 that projected that the state is short $21 billion over the next 20 years, relative to what’s needed to maintain the state’s transportation system. The report skews its funding options toward user fees verses more general taxes, including hikes in the gas tax and the motor vehicle registration tax.

“The board really wants us to arrive at a solution for the problem, not a Band-Aid, but not one that is politically acceptable but doesn’t get the job done,” Klingel said. “When the business community is united like we were on [opposing business-to-business] taxes, that can be a very powerful thing. The metro chambers are pretty united, but the trick is to get those that also reflect greater Minnesota to move that forward.”

Getting the support of rural and regional chambers is a key part of Darin Broton’s plan for 2015. Broton, MoveMN’s campaign manager, is courting those outstate chambers as well as metro-area business groups. He’s pulled in the support of Blue Cross and Blue Shield of Minnesota.

In order to get around what appears to be reluctant support from traditional business groups, transportation-funding backers have been looking to individual CEOs of Minnesota companies.

“The challenge still remains: to move something forward, we need parts of the business community, particularly those who have a large footprint in the state, to step forward,” Broton said. “There’s been several different strategies involved to rally the business community. One has been looking at the larger corporations in town and their leadership. The transit portion is important to them in attracting and keeping high quality talent to their businesses.”

Dayton’s transportation commissioner Zelle has met with many CEOs such as Jeffrey Ettinger of Hormel to try to get their individual support. Neither Ettinger nor Davis of U.S. Bancorp—who has been courted by legislative leadership—returned a request for comment. Charlie Weaver, head of the Minnesota Business Partnership, which represents the state’s CEOs, also was not available to comment.

“Hormel has a state-of-the-art robotic shipping technology as part of their plant, and to have that kind of innovation and efficiency stop at the end of the driveway would be irresponsible,” Zelle said.

This session, Zelle worked directly with the chamber—where he used to be a board member—to step up efficiencies at MnDOT. “The conversations that I have they recognized that efficiencies are only one piece of the puzzle,” Zelle said.

For Dibble’s part, the success of a major transportation package shouldn’t—and likely won’t—hinge next year on the support of groups like the Minnesota Chamber of Commerce and the Minnesota Business Partnership.

He also stressed the role of regional chambers, which he says are dissatisfied with the direction of their umbrella organization on transportation funding. “They feel the state chamber does not speak for their interests,” Dibble claimed.

Jonathan Zierdt, president and CEO of Greater Mankato Growth, the area’s chamber of commerce, said a recent survey shows their members strongly support new revenue for transportation projects next session, but they haven’t settled on a funding mechanism for a major transportation package.

“They should be stable, long-term revenues that are efficient, and any revenue should have a direct tie to economic development and a return on investment,” Zierdt said. “It’s impressive that our diverse business membership does agree that transportation is important and we need revenue to pay for that, and that’s significant.”