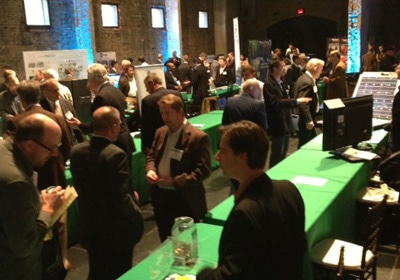 Eden Prairie-based IrriGreen, having advanced from the Cleantech Open’s North Central Region competition, will compete Thursday and Friday on the national stage for a grand prize of $250,000 in investments and services.
November 18, 2012

A Minnesota startup whose technology aims to reduce water usage in landscape irrigation will face off Thursday and Friday against companies from across the United States in a national entrepreneur competition.

Eden Prairie-based IrriGreen was selected last month as one of four startups—and the only one from Minnesota—to advance from the 2012 Cleantech Open North Central Region competition to the Cleantech Open Global Forum, a national business-plan contest and incubator program that aims to recognize and support the most promising startups in clean technology fields.

IrriGreen manufactures and sells an irrigation system, which it says uses digital technology akin to that used in ink-jet printers to ensure precise watering accuracy and efficiency. Its Genius Irrigation System controls patent-pending multi-stream nozzles that create watering patterns that fit the exact shape of the landscape it is irrigating, thus minimizing overlap between sprinklers, the company said.

According to IrriGreen, a traditional irrigation system waters in overlapping arcs that lead to over-watering and require 30 to 35 sprinklers and a quarter mile of plastic piping for a typical residential or light commercial property. By contrast, a Genius Irrigation System at the same location would take only 250 feet of pipe and five to six sprinklers, reducing installation time and water usage by up to 50 percent. IrriGreen claims that the increased efficiency will increase profits for installers and reduce water bills for property owners.

IrriGreen and the three other North Central regional finalists were picked from a pool of 20 semifinalists that have been participating in the Cleantech Open accelerator program for the past five months. The other regional finalists include two Chicago-based startups—HEVT, which is developing hybrid electric vehicle technologies, and SiNode, which is focused on anode technology for lithium-ion batteries—and Barasa, a Wheaton, Illinois-based startup with a patented process for converting industrial organic waste into topsoil.

The regional finalists each won prize packages that include cash and in-kind services worth up to $20,000.

At the national competition, which is being held Thursday and Friday in San Jose, California, IrriGreen will face off against 25 other U.S. startups from across the country for a grand prize of $250,000 in investments and services.

About 20 international startups will compete in a separate competition, vying for $250,000 in investments and services, as well.

If IrriGreen takes home the grand prize, it will mark the second consecutive year that the award is granted to a Minnesota-based startup: Eden Prairie-based Atmosphere Recovery, Inc., which makes a system to increase the energy output from gas- or liquid-based energy processes, won the 2011 competition.

The Cleantech Open says that, since its 2006 inception, it has awarded more than $5 million in cash and services to support cleantech growth companies. In addition, the 581 companies that have participated in its program have gone on to raise more than $660 million in external investments.

Justin Kaster, co-founder and director of the North Central Cleantech Open, was an investment banker at Minnetonka-based Cherry Tree & Associates prior to taking a full-time role at the Cleantech Open. In December 2011, he was named by Twin Cities Business magazine as one of “200 Minnesotans You Should Know.”

The program’s regional sponsors include Chevron, the University of Phoenix, Wells Fargo, The Dow Chemical Company, Deloitte, and Faegre Baker Daniels LLP, among others.

Kaster said in a statement that Americans use about 7 billion gallons of water on landscape irrigation every day, and “IrriGreen has put the pieces in place to help make our community water supplies more sustainable, while greatly reducing the biggest cost in the installation business—labor; as a result, they are poised to make a significant impact.”