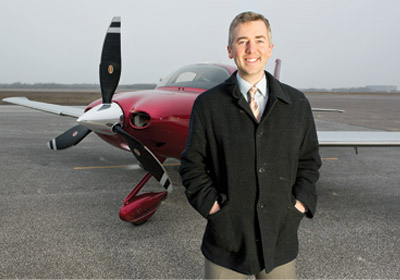 Duluth Mayor Don Ness has received another honor for his success as the “CEO of Duluth.”
May 04, 2014

Several months after Twin Cities Business named Don Ness its “Person of the Year,” the Duluth mayor earned a similar title at the Joel Labovitz Entrepreneurial Success Awards, an annual program that honors successful entrepreneurs from throughout the Twin Ports region and Northeastern Minnesota.

While Ness is a politician rather than a businessman, he’s been recognized for his work in bolstering Duluth’s economy, which is home to many expanding businesses. In January, TCB honored Ness as its “2013 Person of the Year.”

On Wednesday, the University of Minnesota–Duluth’s Labovitz School of Business and Economics gave Ness its annual “Business Person of the Year Award,” an honor previously awarded to northern Minnesota business magnates such as Jeno Paulucci (who is also a member of TCB’s Minnesota Business Hall of Fame), the Duluth News Tribune reported.

Roughly 400 attendees gathered for the Joel Labovitz Entrepreneurial Success Awards luncheon at the Duluth Entertainment Convention Center, and Dean Amy Hietapelto, when presenting Ness his award, reportedly referred to the mayor as “the CEO of a $250 million organization who has made difficult business decisions with personal integrity.” (That “organization” being the city of Duluth.)

According to the UMD Center for Economic Development, 42 businesses were nominated for this year’s program, which marked the 22nd annual awards.

Here are the other Joel Labovitz Entrepreneurial Success Awards recipients, including a quote from UMD explaining why they won:

• Lake Superior Consulting, LLC, Phillip Powers, Duluth (Established Entrepreneur)
“Lake Superior Consulting, LLC (LSC) is an engineering and service company for the energy industries. They specialize in integrity management of high-pressure pipelines. LSC has nearly doubled in size each year since 2004 and has grown from three employees in one location to nearly 300 employees at four locations nationwide. It prides itself on placing customer service as its most important ‘deliverable.’”

• Zup’s Market, Edward J. Zupancich, Babbitt (Mature Entreprenuer)
“A successful family grocery store business for nearly 100 years, Zup’s Market has expanded its long tradition of civic involvement and hometown pride throughout its Northeastern Minnesota locations. The company is known for its community-centeredness and employing individuals with cognitive disabilities as well as retirees and high school and college students.”

• Kelly Klun of Klun Law Firm, Ely (Entrepreneurial Leadership)
UMD said that Kelly Klun, who serves as Ely's city attorney, “has dedicated much of her career to the economic and community development of her hometown” and “advises on many topics, not just legal issues.” For example, she recently organized the “Incredible Ely campaign” which includes a network of partners that are working to provide Ely with “enhanced access to tools and resources to better support local business owners.”

• Bent Paddle Brewing Company, Duluth (Entrepreneurial Vision)
The university said that the relatively new Bent Paddle Brewing Company “has been widely accepted in the Duluth and regional economy because the people involved had a clear, organized, and well researched plan that when implemented became a thriving business.” In its first year, the company has reached revenue “well ahead of projections, and their brand is widely recognized.” The school described the brewery as “leaders and mentors for others who are in business” and called out its “core value of a sustainable work/home life balance for their employees and themselves.”