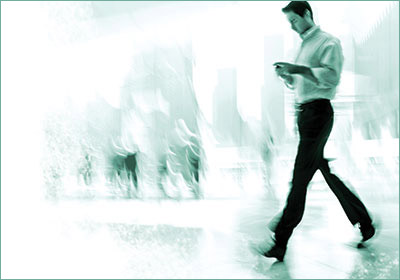 Instead of hiring permanent employees, many Minnesota companies are increasingly choosing the flexibility that temporary workers offer them.
March 03, 2014

Patrick Foulks works at a Fortune 500 company in the Twin Cities, but he didn’t need to network with Target Corp. employees before landing on a target.com team.

Instead, Foulks’ path to full-time work at Target was paved by the Digital People unit within Atterro, one of the many human capital and staffing agencies operating in the Twin Cities.

Atterro is a matchmaker. It finds people who are well suited to fill full-time, part-time and project positions at businesses across the metro area.

“I was not seeking out a contract position. I met one of the recruiters of Digital People at a networking event,” Foulks recalls. “He had a job that interested me, so I went from there.”

Foulks is among thousands of Minnesotans who are considered temp workers, and Minnesota is part of a national trend in which an increasing number of people earn a living outside of full-time, permanent jobs with a single employer.

“That’s an area where we’ve seen pretty dramatic growth,” says Steve Hine, research director for the Minnesota Department of Employment and Economic Development (DEED). “This past August, it topped 70,000 people statewide who were working in temp jobs” they got through staffing firms.

Foulks, who left an operations job with an advertising agency, is included in that tally. He is technically an employee of Atterro’s Digital People, and he expects to continue as a full-time temporary at Target as long as Atterro maintains its client relationship for the web-based work. If the Target work goes away, then Digital People would attempt to find other full-time work for Foulks.

Foulks started work at the temp job in February 2013. Is he worried that a temporary job he enjoys could disappear? “There really are no guarantees anywhere,” Foulks says. “So even when I worked full time [at the ad agency] I didn’t necessarily have any more security than I do now.”

Minnesota lost about 160,000 jobs during the Great Recession, which ran from December 2007 through June 2009. DEED’s Hine says it took until August 2013 to recover all of those jobs. He could see that economic conditions were improving when the number of temporary jobs started to rise.

But temp jobs are not as limited as they were 20 years ago. “We’ve seen the temp agencies expand beyond the clerical,” Hine notes. It’s now standard for temporary staffing agencies to find workers for professional services, information technology, financial services and manufacturing.

The upswing in temporary jobs also is being tracked by the Federal Reserve Bank of Minneapolis.

“Temporary jobs gained through staffing firms are growing at a fast pace coming out of the recession,” writes Ronald Wirtz, editor of the fedgazette, in an extensive article in the Fed’s January quarterly newspaper. “The industry’s share of total employment is nearing its historical peak and could grow well past this mark.”

The Fed’s employees have dissected many types of employment data to get a handle on temporary staffing in Minnesota. Wirtz notes that temp jobs account for about 90 percent of the positions counted under the category of employment services.

In the post-recession period, Wirtz reports, employment services jobs are responsible for 19 percent of Minnesota’s net employment gains. The comparable statistic is 17 percent on a nationwide basis.

The Fed discovered another strong indicator in the growth of temp jobs. In Minnesota, Wirtz writes, “since the end of the recession, the share of jobs in employment services has grown from about 1.5 percent of total nonfarm employment to 2.5 percent.”

A minority of companies routinely hire temporary workers, but the receptivity to the practice is growing because of the flexibility it affords businesses. It allows companies to expand and contract workforces along with economic trends.

It also permits businesses to hire people on a project basis, and leave the screening of job candidates to staffing firms.

“Temp used to be a dirty word,” says Susan Rylance, senior vice president of marketing for Atterro Human Capital Group in Minneapolis. Some workers assumed that temporary jobs “might not be a great job or have poor working conditions.”

But Rylance says temp jobs are now better regarded and understood by a larger portion of the workforce. She adds that temporary positions now encompass creative, IT and finance jobs, and some businesses will use “contractor,” “consultant” and “freelancer” to describe them.

“They are our employees and we want to keep them employed,” Rylance says, which provides the business an incentive to find good staffing assignments for Atterro’s talent pool. “We do provide our temporary workers the same 401(k) benefit as our internal [permanent Atterro] employees,” Rylance adds. “We do provide a discretionary match for those who participate.”

Karen Melby, managing director for the Minneapolis office of Steven Douglas Associates, says that her staffing firm has carved out a niche for placing experienced professionals in temporary jobs.

On average, the employee she is matching for a temporary assignment has 18 years of work experience, and she finds people jobs in finance, accounting, audit compliance, human resources and information technology.

“I look for people who’ve made a conscious decision to do project work as their next career,” Melby says. She wants people who have strong skill sets and love doing the work, but “don’t necessarily want to be in corporate America anymore.”

While temporary workers frequently are located in corporate workplace settings, Melby explains that the time-limited nature of their assignments often allows them to avoid the office politics and long hours that are major factors in the lives of full-time managers in large businesses.

Melby says that many of her temporary employees may work 35 to 40 hours a week rather than the 55 to 70 hours a week they might work if they held full-time, permanent executive jobs.

Just as the Fed has monitored the influx of temp workers, Melby says she saw a “steady pickup of project work” during 2013.

“Some businesses downsized so significantly, they don’t have the bench strength to get their projects done,” Melby says. “Some are saying, ‘We don’t have the people. We can’t continue to stress our current people, because we are at risk of losing our top talent.’ ”

So they bring in temporary help to do special project work or to fill in where there are depleted ranks from layoffs, retirements or unfilled positions.

In her current position, senior vice president of Ever-Green Energy in St. Paul, she hired a temporary consultant in 2013 to develop a compensation and benefits strategy.

“I just needed someone to do that specific project, facilitate the process and leave us with things to manage on our own,” Hart explains.

When she worked at the University of Minnesota, Hart adds, she hired temporary workers to cover office management and administrative work.

“With the economy the way it’s been the last few years, it’s hard to manage around a full-time workforce,” Hart says. With peaks and valleys in the strength of the economy, there can be a cycle of hirings and layoffs. When there is a period of uncertainty, Hart says that many employers like to flex up their workforces with temporary workers, because they can avoid or minimize layoffs if the economy weakens.

While temporary workers offer flexibility for businesses, temp employees also can gain some flexibility in their work assignments and locations.

Kealy O’Neill of St. Paul got a temporary position through Atterro’s Digital People after she was laid off from her job at Name- tag International, which moved its office to Iowa. With a background in marketing and communications, O’Neill says she was happy to get a temporary job placement at Andersen Corp.

Building a credible work history as a temp

“I was a web content coordinator,” O’Neill says. “The digital marketing team was fairly small and they needed additional support.”

While the temporary position has ended, O’Neill says, “having three months at Andersen puts me in a different category on my resume.”

She adds that she is working with Atterro’s Digital People to pursue job opportunities in the Twin Cities and Chicago. At 28, she doesn’t own a home and she’s open to relocating, and says that Atterro is opening doors for her. She views potential relocation as an adventure and she isn’t bound to the Twin Cities like some middle-aged workers who have a few children in school and a spouse with a job in the metro area.

Will there be a huge shift to temp workers?

Some workforce analysts envision much more rapid growth in the ranks of temporary workers, which could cause lots of instability for workers accustomed to full-time employment with a specific company.

Michael Schrage, in an article for Harvard Business Review, recently commented on the “new permanent temp.”

He argues that companies want maximum flexibility, and they can increase it by restraining their employee counts and using more temporary workers. “They seem increasingly focused on productively cultivating that core 20 to 25 percent of people who reliably generate the 70 to 80 percent of enterprise value,” he writes. “They’re rethinking their economic relationships with the rest.”

Except for those employees responsible for attracting revenue to companies, Schrage observes, “bringing full-time employees on board is increasingly seen as a riskier and less rewarding business bet.” Schrage was writing as a research fellow at MIT’s Sloan School of Management.

What would occur in Minnesota and across the United States if there is a huge shift to temporary workers?

“In many ways our self-worth psychologically is tied to full-time employment,” Hart says. Beyond one’s identity, she adds, people often can’t get a loan to purchase a house unless they can substantiate stable income through a full-time, permanent job.

If there is going to be a substantial increase in the portion of temporary employees in the U.S. workforce, she says, “I don’t think we can just strand people with dealing with the realities of being in a migrating workforce.”

Hart and Atterro’s Rylance both say health care is a major issue with temporary workers.

“Our health insurance benefits are limited, but we do offer them, as well as holiday pay and a service bonus,” Rylance says.

As the federal Affordable Care Act is implemented, Rylance adds that greater clarity should emerge about the relationship between health care coverage and employment.

From her perspective, Hart would like to see a targeted, smart use of temporary employees and a renewed commitment to permanent hires.

“I hope, as the economy rebounds and companies become more confident, that they can choose to use temporary resources where they need them,” Hart says, “but feel more certain about reinvesting in long-term jobs.”

Dan Kimmel has worked in the staffing industry for 12 years and he has a good sense of the staffing environment in Minnesota. Kimmel is a sales director at Doherty Staffing, one of the largest agencies in Minnesota. He also serves on the board of the Minnesota Recruiting and Staffing Association. We asked Kimmel what he envisions for 2014: 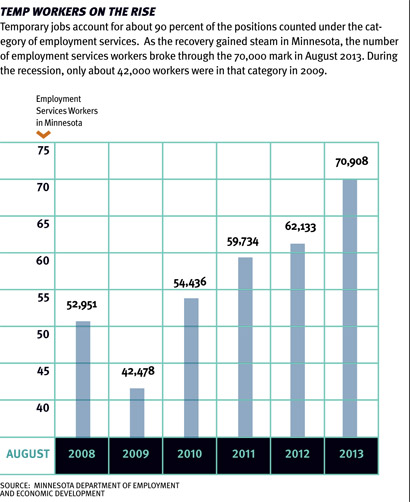