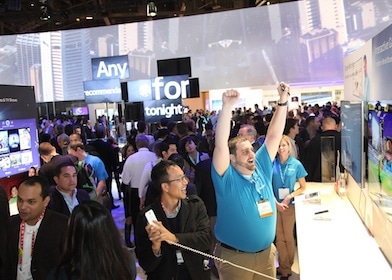 MN Cos. Show Off Tech At Consumer Electronics Show

This year's International Consumer Electronics Show (CES), which will be held in Las Vegas between January 7 and 10, will feature cutting-edge technology from more than 3,200 companies and startups, including about two dozen from Minnesota.

The Arlington, Virginia-based Consumer Electronics Association (CEA)—which consists of roughly 2,000 companies within the consumer technology industry—hosts the annual show as a way to introduce “next-generation innovations” to the marketplace. Approximately 78 percent of Fortune 100 companies exhibit at the CES, which also includes more than 300 keynote speeches and conference sessions.

“From wearable tech to the latest in 3D printing, the ‘Internet of Things,’ driverless cars, and sensor technologies, the 2014 CES will feature the world’s largest hands-on showcase of emerging innovation,” Karen Chupka, senior vice president of CES and CEA’s corporate business strategy, said in a statement.

The CEA bills the CES as the “largest app event in the world” and hosts companies’ technologies, products, and services in 15 product categories, including audio, automotive electronics, connected home technologies, digital imaging and photography, electronic gaming, and entertainment.

Roughly 150 companies from the Midwest are exhibiting at this year’s CES event.

According to Chupka, 3D printing has grown so significantly that 3,000 square feet of additional space was added to this year’s CES solely for 3D printing exhibitors.

“It’s quickly becoming one of the more dynamic and innovative categories within our industry, while also becoming more accessible to consumers from a price perspective,” Chupka said in a statement.

Several other returning CES participants will be presenting again this year, including Maplewood-based 3M Company, which will present products in 12 categories, including computer screen and privacy protection technology, multi-touch monitors, and monitor displays.

In addition to the growth of 3D printing technology at this year’s CES event, Chupka also said the digital fitness area has grown by 30 percent, expanding to 11,500 square feet. (Pictured to the right is a group of panelists from last year's CES.)

Other big-name companies—such as Imation and Sleep Number—are also among the 23 or so Minnesota companies exhibiting this year.

Also among the presenters are several smaller Minnesota companies and startups.

Shoreview-based Tarsier, Inc., a high-tech division semifinalist at the 2013 Minnesota Cup, is presenting a silicon embedded eyewear technology, called MoveEye, that allows the user to interact with TVs using hand gestures. To view a video of its MoveEye technology, click here.

Minneapolis-based QFO Labs, Inc.—a startup that develops high-tech gaming products—is showcasing its Quad Fighter remote controlled helicopter and Mimix controller products in another growing sector of this year’s CES: gaming technology. As one of approximately 40 exhibitors within the “Gaming Showcase TechZone,” QFO Labs is presenting its series of products for 3D gaming, according to Chupka. The company is exhibiting at the booth of Nordic Semiconductor (a wireless chip developer based in Trondheim, Norway).

Click here to view more Minnesota companies and startups that are exhibiting at the 2014 CES and to learn about their new technologies.