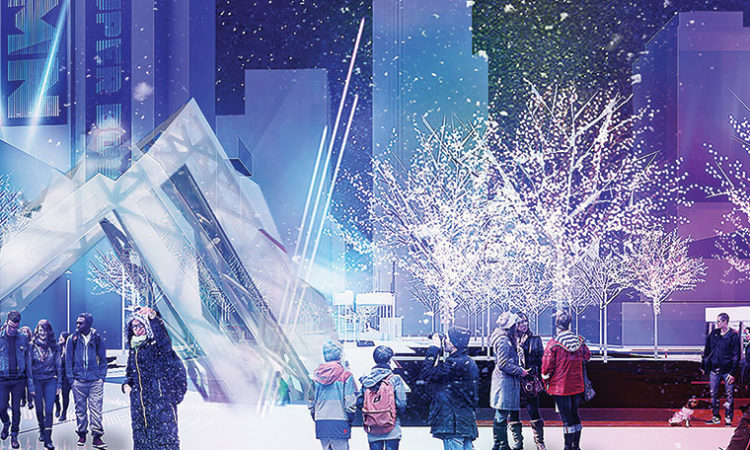 Minnesota will be on a global stage when it hosts Super Bowl LII in February. While the Super Bowl is a single sporting event, the marketing efforts behind the game by sponsors and the host city are anything but a one-day campaign. The number of out-of-town visitors the Super Bowl will attract to Minnesota, especially the Twin Cities, is expected to be worth $285 million in spending, according to a Rockport Analytics report prepared for the Minnesota Super Bowl Host Committee. Media exposure could entice other visitors to come to Minnesota, and a successful Super Bowl would demonstrate the state’s ability to host gigantic events.

So how is the land of 10,000 lakes going to take advantage of such a large opportunity to present itself to the world?

For starters, get ready to see and hear a lot more about “the Bold North.” That’s the marketing moniker the Minnesota Super Bowl Host Committee and local sponsors are using to characterize Minnesota. The plan is to embrace the state’s climate and hardiness, not run for shelter inside the skyway systems.

After all, Minnesota’s NFL team is the Vikings and the real Vikings were not exactly a group that headed to Florida for the winter to escape the cold.

“It has to be more than a one-day event. We’ve been challenged to maximize the Super Bowl and help people think about Minnesota in a different way,” says Maureen Bausch, CEO of the host committee.

In 2015, Bausch brought together a group of top chief marketing officers (CMOs) to talk about the challenges they faced in Minnesota. At the head of the list was the difficulty they have persuading people to come to Minnesota. While that may be a shock to Minnesotans who have experienced what the state has to offer, the perception outside the state can be very different.

The CMO group wanted to make sure that people understood Minnesota wasn’t frozen fly-over land, but a sophisticated place with great cuisine, legendary philanthropy and well-educated people who don’t hibernate when it turns cold and also happen to be physically fit.

Part of the response to that request was a perception/reality presentation about Minnesota that local advertising executive John Jarvis made to the NFL to guide its creative process in developing the graphics for the 2018 game. According to Bausch it definitely worked. Jarvis also has a light-hearted digital marketing campaign planned that features tweets from Minnesota icons to invite people from neighboring states and Canada to the events surrounding the Super Bowl.

Graphics for the game will feature a sophisticated type treatment with custom contemporary letters resembling icicles. Since it will be getting dark at 4:30 p.m. at that time of year, the imagery uses dark backgrounds that add elegance; some include a color treatment of the aurora borealis.

NEW SPENDING IN MINNESOTA FROM THE SUPER BOWL

The Super Bowl is expected to generate about $407 million in new spending in the Twin Cities area. When accounting for regular tourism that will be displaced by the Super Bowl, net increased spending will be about $340 million. 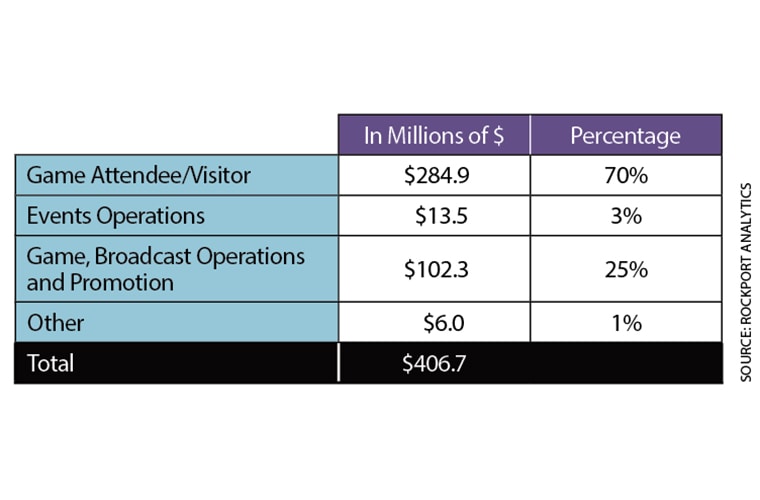 The marketing idea is to embrace Minnesota’s environment in an intelligent way, rather than the almost cartoonish Fargo-esque way the Coen brothers have portrayed their home state in movies.

Bausch has a secret weapon to promote the state in the form of 10,000 secret weapons—also known as the volunteer corps of brand ambassadors. Because the big game is actually 10 days of marketing and events leading up to Super Bowl Sunday, it definitely takes a village to pull it off. The host committee started screening volunteers in early August to find 10,000 people who will not only give you directions if you’re lost or point you to a good restaurant or coffee shop, they’ll also tell you something about Minnesota or a nearby historic site or point of interest and invite you to visit Minnesota again. It’s that bit of storytelling that people remember and can leave a lasting impression.

The idea came from a visit Bausch made to Indianapolis to talk to the head of its host committee. The city turned its volunteer force into brand ambassadors, and the results paid off. In fact, economic analytics show that Indianapolis sporting events, meetings and conventions are up 20 percent since its Super Bowl, and the increase is attributed directly to the city hosting the game. 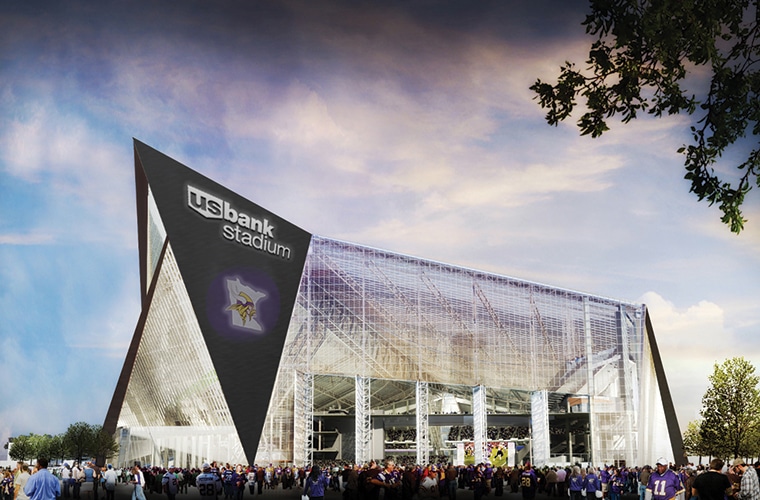 Last year’s host city, Houston, also is seeing a positive economic impact as a result of Super Bowl LI. The greater Houston area saw about $350 million in new spending from hosting last year’s game, according to a study by Rockport Analytics, the same organization that Minnesota used for its projections.

“From a business perspective, the international exposure Houston received during Super Bowl 51 has resulted in increased interest and understanding of what Houston has to offer and what the city can handle,” says Leah Shah, PR manager for Visit Houston. “As a result, selling Houston as a destination for business is that much easier. Though the focus was on the big game, media in town dedicated a lot of time leading up to the game talking about Houston as the most diverse city in the country, the culinary scene, the impressive arts scene and other attributes.” 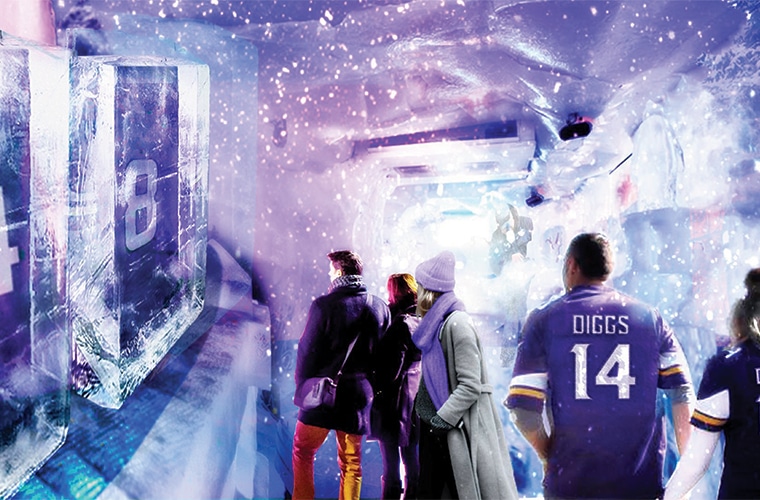 The Minnesota Super Bowl Host Committee will use this image in its Bold North marketing campaign.

Downtown restaurants in Houston also have seen an uptick in business post-Super Bowl and noticed their clientele has expanded to include people who normally wouldn’t make the trek to the city for dinner. The Marriott Marquis, which was in the heart of the action downtown, has seen a 20 percent increase in business from groups wanting to book rooms since the big game. The hotel’s weekend business also is up 20 percent, with most of the increased traffic coming from people in the suburbs who are spending time in the city for the weekend.

A local convention and visitors association has plans to capitalize on the 2018 game with a new website that includes an overhauled venue search and expanded content, including Super Bowl-specific content, according to Kristen Montag, senior PR and communications manager for Meet Minneapolis. The organization also will be working with key meeting and convention clients to showcase the Minneapolis Convention Center and U.S. Bank Stadium in action as a demonstration of how the city can host any organization’s citywide event in the future.

Lest it seem everything will be happening in Minneapolis, the wealth will be shared to the east with St. Paul and to the south with the Mall of America. St. Paul will host an opening-night kickoff and the closing-night Taste of the NFL, which was started by local restaurateur Wayne Kostroski. The Mall of America will be the site for some media, and other events yet to be named. 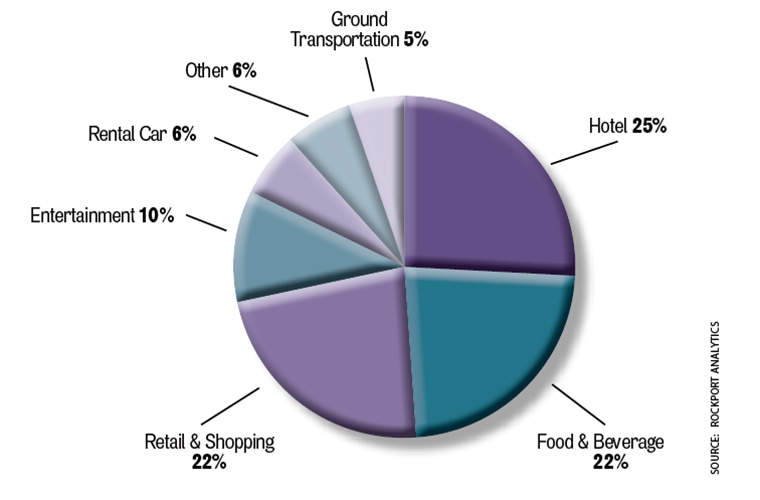 Game attendees and non-resident visitors are expected to spend about $285 million. Their spending breaks out into the following categories.

Despite the upbeat predictions surrounding Super Bowl economic impacts, there always are some who question the rosy scenarios. One economist in particular has been critical of Super Bowl economic forecasts and final reports. Victor Matheson, economics professor at the College of the Holy Cross and president of the North America Association of Sports Economists, has published many papers on the subject. He contends that the official studies produced by host cities often project two or three times the actual economic impact. While Matheson says the Minnesota estimated impact of $343 million is higher than he’d like, he observes it’s not as unrealistic as other cities have estimated, such as Arizona, which claimed an economic impact of more than $700 million. Rockport Analytics, based in Pennsylvania, estimates the Twin Cities area will “realize a net new contribution to the regional economy of $343 million.”

Less debatable are the benefits flowing to Minnesota organizations focused on nutrition and getting kids active. As part of the host committee’s Legacy Fund efforts, a yearlong giving effort started 52 weeks before the big game. By late summer, the cause marketing effort had distributed more than $2.5 million in grants to help fund programs for children from Moorhead to Rochester under the banner of “Fun, Fuel, Fundamentals.”

When the NFL and Minnesota start the 10-day event-filled countdown to the big game, Minnesota’s host committee will be controlling Super Bowl Live, which will stretch down Nicollet Mall from 12th Street to Sixth Street in downtown Minneapolis and be home to the major television networks in town to cover the game (the NFL Network, ESPN, NBC and CNN). 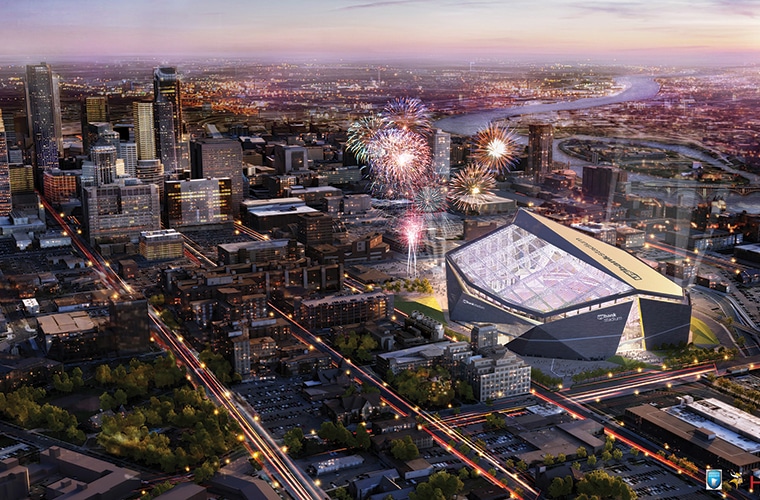 Super Bowl LII will place U.S. Bank Stadium in the national spotlight for several days leading up to game day.

The experience will include a variety of themed blocks covering football, the arts, music and Bold North winter sports like snowmobiling. More specific focuses, such as technology and extreme winter sports, will be highlighted on various days.

The exposure the Twin Cities will receive from network coverage is expected to go far in marketing the city as a fun winter destination for travelers. The aim of marketers is to prove you can embrace the cold and still have a good time. Visitors will pass under large ice arches on 12th and Nicollet and encounter larger-than-life ice sculptures, dog sleds and giant snow globes that people can enter for photo opportunities perfect for sharing on social media.

The marketing effort coordinated by the host committee and participating sponsors extends to Minneapolis-St. Paul International Airport, using the brand position and informing volunteers about the effort to lure visitors back to Minnesota. One approach that is new to Minnesota is the host committee’s effort to enlist five small airports in the campaign, with ice sculptures there to tie in with the Bold North theme. About 1,100 to 1,200 private jets are expected to come in for the game, so these airports will have their share of Super Bowl visitors, as will hotels in cities like St. Cloud, which will house overflow guests, along with other travelers who can’t find closer rooms due to the large influx of Super Bowl visitors.