The state is a major—and growing—producer of the microchips found in your smart phone, iPad, and other touchscreen devices.
June 01, 2011 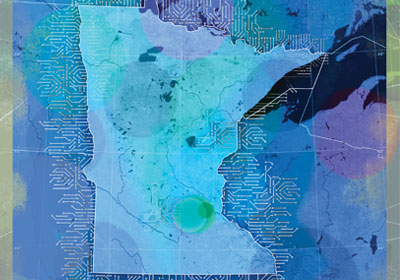 Driven by exploding demand for smart phones and tablet computers, and by steady growth in smarter cars and
higher-capacity hard drives, Minnesota’s specialized manufacturers of integrated circuits have become a driver of the state’s export growth.

Exports of semiconductors and related devices posted a blistering 37 percent compounded annual growth rate between 2003 and 2010, from a low of $185 million to $1.2 billion last year, according to data compiled by the Minnesota Department of Employment and Economic Development (DEED). Over that same period, semiconductors swelled from 1.7 percent of total state exports to nearly 7 percent.

The vast majority of Minnesota’s chips are exported to Asia, with more than half going to the Philippines and another large portion to Thailand, feeding those countries’ thriving electronic assembly industries, according to DEED. Germany’s high-end auto manufacturers also consume Minnesota-made chips, making that country among the top five export destinations as well, according to industry insiders.

Results of that export growth are starting to be seen in Bloomington, where two of the largest manufacturers—California-based Cypress Semiconductor and Polar Semiconductor, a division of Japan-based Sanken Electric Company—are either planning major capacity expansions or have them underway.

In early January, Cypress (Nasdaq: CY) told the financial community that it has begun tripling capacity at its Bloomington facility, and will boost company-wide capital spending to $70 million, up from $50.8 million in 2010 and $25.8 million in 2009.

While Cypress representatives wouldn’t discuss how much of the capital is going into the 14.7 acre site, and declined to talk about current or future employment levels, they have been clear about the plant’s importance to the company’s future.

Cypress is racing to meet demand for its family of TrueTouch chips, which translate your poking finger and bouncing thumb on touchscreen devices into meaningful electronic pulses. In announcing the expansion, the company cited “a record number of design wins in high-volume mobile phones, tablets, and other large-screen platforms,” and said it was making the investment in its plant to ensure “that we have capacity in place to meet rapidly growing demand.”

The Holy Grail: a Solo Chip

In a conference call with investors last January, Cypress reported that 2010 revenue shot up 32 percent to $884 million. True-Touch chips are in such hot demand that the backlog of orders for them has been pushed out as far as 16 weeks, up from a normal six weeks, swelling the corporate-wide book-to-bill ratio—current orders relative to current invoices—to a 10-year high of 1.35. By the midpoint of this year, TrueTouch chips will be used by eight of the top 10 handset OEMs (original equipment manufacturers), company officials said in January.

Eighty percent of TrueTouch demand today comes from handheld devices, primarily smart phones, which account for more than 25 percent of total company revenue. Other applications, such as tablet computers, are growing even faster than handhelds and increasing overall demand. As a result, Cypress said it expects to double TrueTouch shipments in 2011 over 2010.

The introduction of the Apple iPad and competitor products set off a new wave of growth for touchscreens, requiring multiple chips per tablet. Cypress CEO T. J. Rodgers explained to analysts during the earnings call: “The problem is that if you want to give some resolution and you have a big screen like on an iPad, your cell phone chip doesn’t have enough IO [input-output] capability to run a bigger screen.” As a result, larger screens use multiple chips and a controller.

Rodgers then described the “holy grail”: a single chip that can manage input from a bigger screen in a smaller package while using less power than a multichip set. Cypress began shipping its “Solo TrueTouch” early this year, which Rodgers said is the first single-chip solution on the market and is manufactured at the company’s Bloomington plant.

Asked later what Cypress’s market share is for touchscreen integrated circuits, the company’s PR director, Don Parkman, hesitates then says: “Truth is, I don’t think anybody could give you that answer. The market is changing so rapidly, has grown so fast. I can definitely tell you we’re one of the leaders—worst case, top three.”

While touchscreen market forecasts vary widely, the market research firm IDC, International Data Corporation, estimates that 270 million smart phones were shipped in 2010, up 55 percent in a year, and that the number will continue growing at an annual percentage rate in the mid-20s. Another market researcher, Gartner Group, estimates that shipments of tablet computers will increase tenfold from 2010 to 2014, to more than 200 million units sold annually. Forecaster DataBeans projects that total touchscreen shipments for phones, tablets, cameras, and kiosks will triple from 300 million in 2010 to 1 billion by 2014.

Whatever the actual numbers, Cypress is laying its bets down now in Bloomington by expanding the fabrication plant that it dubs “Fab 4.” Given demand for TrueTouch chips, Fab 4 could be an important player for a long time.

“Capacity Under Our Control”

Cypress has what it calls a “flexible manufacturing strategy”—a 50-50 split between internal manufacturing and external sourcing. The Bloomington site is the company’s only wholly owned semiconductor fab. Cypress has a strategic sourcing arrangement with Shanghai-based Grace Semiconductor, which it describes as its major sourcing partner.

“There is absolutely no doubt that having not just some capacity but half your capacity directly in your control, it’s a big deal,” CEO Rodgers said on his conference call with analysts. “The advantage of having Chinese foundries is that they are very cost effective. They are typically using market equipment with lower wage rates. The disadvantage is that you can wake up one morning and find out that you can’t get as many wafers as you would like.

“So, we absolutely have to keep a bunch of capacity under our control to make sure that we don’t get surprised,” he concludes. “I do believe it’s an advantage over a completely fabless house.”

Cypress purchased its Bloomington facility from Control Data’s VTC unit for $14.7 million at the end of 1990. “It’s a very valuable property,” Parkman says. “We believe it gives us control . . . and our costs are very, very good in Minnesota.” Describing the plant expansion as “a good deal,” he says Minnesota offers “a tremendous pool of very skilled people. They do a very good job.”

Just down the road from Cypress is Polar Semiconductor, which makes integrated circuits used in automobiles, among other things.

Last November, Polar Semiconductor won approval from the City of Bloomington to construct a 98,000-square-foot building, which would increase its manufacturing footprint by 60 percent. Plans filed with the city project as many as 300 new production jobs, which could bring total employment at the site to more than 800 once the build-out is up and running. While the city approved the expansion, Polar’s parent company, Sanken Electric, had not made an announcement as of early May, and declined to discuss whether or when the project might proceed.

A source at Polar Semiconductor says that if the expansion happens, one of several reasons will be the increasing silicon content of automobiles. More chips are going into vehicles, and demand is up at auto manufacturing sites globally.

Semiconductors have been made at the Polar site since the 1970s. Like Cypress’s, Polar’s plant was originally part of Control Data Corporation. Sanken Electric, a company with $1.6 billion in annual revenue, bought the facility in 2005 from a CDC spinoff for $83 million.

While it’s far from the major auto manufacturers, the Minnesota site is an important star within the Sanken constellation, according to the source at Polar: “The auto industry is very quality conscious,” and Polar’s Bloomington fab, with a long legacy of supplying the industry, “is auto qualified . . . with years of building trust.”

There’s another reason to believe in the plant’s importance. Size matters in the economics of semiconductor manufacturing. The larger the blank silicon disk (called a wafer) that gets passed through the complex steps of making
an integrated circuit, the more individual chips will come out at the end of each pass, thereby increasing productivity and reducing cost. Other fabs within Sanken can only handle wafers up to six inches in diameter. Polar operates the parent company’s only eight-inch fab, and the source there says: “The future is eight inch and larger.”

A major reason Minnesota has a place in that future is the presence here of Control Data, Cray, and others in the computer industry 40 or 50 years ago, says Steve Campbell, professor of electrical and computer engineering and director of the Nanofabrication Center at the University of Minnesota.

“The Minnesota connection really grew out of the mainframe industry that thrived here in the ’60s and ’70s,” Campbell says. “That said, Minnesota has a number of advantages, including a well-educated and highly motivated work force.” Other pluses include Campbell’s employer, the U of M, and the Minnesota State Colleges and Universities system, which supply training programs and research opportunities in the field.

A Minnesota site has its limitations as well, Campbell admits. “I think that it would be difficult for a plant here to be competitive in state-of-the-art, full-scale CMOS [complementary metal-oxide semiconductor] chips, which is the mainstream technology,” he says. High volume and low cost are the keys to success when locating these plants, so they tend to be built around already-existing CMOS plants or at low-cost-labor sites.

Even so, Minnesota’s existing manufacturing infrastructure counts as an advantage in building the state’s future in semiconductors. The original Control Data investments in real estate and construction, made decades ago, have been fully amortized. Capacity expansions at these sites, while costly, are nowhere near the staggering price of a brand new “greenfield” fab. Intel, the industry leader in the U.S., recently announced a record $10 billion capital spending spree for 2011, including $2.4 billion for a new plant to be built near existing ones in Oregon.

With a foundation built on a solid legacy, and an important role as a manufacturer in growing niche markets,  Minnesota’s semiconductor industry seems to have just the right touch for a solid future as well.