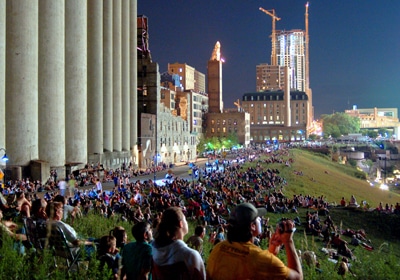 Minnesota’s Summer Tourism Heats Up In 2016

Some lodging businesses remain confident that tourism numbers will remain strong through the fall.
September 16, 2016

Minnesota’s tourism and hospitality sectors are celebrating a strong summer that was flush with cash.

With Labor Day marking the unofficial end of the season, the industry is taking stock of how the state’s brief months of warmth performed.

“These results continue an exciting trend for Minnesota tourism, and along with a strong economy, indicate that our marketing efforts and #OnlyinMN campaign are working,” said Explore Minnesota director John Edman in a statement.

Looking toward the fall, at least one-third of the lodging businesses surveyed were anticipating both higher revenue and occupancy numbers compared to fall 2015.

“Minnesota continues to be an attractive, close-to-home getaway for our core target markets, and is gaining the attention of more travelers from further away,” Edman said. “2016 has been, and will continue to be, a strong year for Minnesota tourism.”

Explore Minnesota’s recent outreach campaigns aim to continue the steady increase in travel spending in the state, which the agency said has grown from $11 billion in 2009 to $13.6 billion in 2014. One of Explore Minnesota’s recent efforts was the “MNstagram Booth,” a shipping container with local scenery dropped into cities such as Chicago, Denver and Kansas City. The traveling photo booths include backdrops of a canoe-in-nature scene and a drum kit at First Avenue. The organization said over 325,000 fans included them on social media.