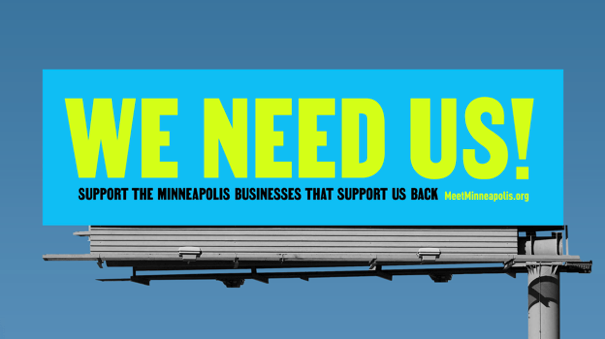 Statewide, travel spending is down an estimated $5 billion for spring and summer, and fall isn't expected to be much better.
By Allison Kaplan
September 08, 2020

As CEO of Meet Minneapolis, the tourism and convention association, Melvin Tennant is accustomed to selling the city to the world: the NFL, trade groups, anyone who might want to bring an event to town. With the calendar cleared of major gatherings for the remainder of 2020 and the city reeling from riots and more riots, Tennant and his team are looking inward. For the first time, Meet Minneapolis is running a campaign aimed at supporting local businesses.

Perhaps you’ve spotted the bright blue billboards around town that declare in neon yellow letters: “We Need Us!” with the tagline, “Support the Small Businesses that Support Us Back.” Developed in partnership with Carmichael Lynch, the $50,000 campaign calls out specific independent businesses like Northeast gift shop I Like You and breweries including La Dona Cerveceria. Meet Minneapolis has created a “We Need Us” landing page on its website filled with lists of farmers markets, Black-owned stores, restaurants that take you on an international taste tour without leaving town, and neighborhood overviews, from Nokomis to Cedar Riverside.

Long before Covid-19, Meet Minneapolis was developing “cultural districts” to draw attention to neighborhoods that might not be the typical tourist destinations, Tennant said. “It’s been a trend in tourism for several years.”

The shift is marketing those unique assets to a local audience.

“With a lot of people not traveling long distances, we need ways to stimulate tourism at the local level,” Tennant said. “We’re encouraging local residents to explore parts of the city they may not be as familiar with. It’s not what we would normally do, but it’s important to support the small businesses that have been really devastated by this year.”

Downtown Minneapolis is a harder sell. Theaters and sports venues remain dark and the vast majority of the city’s 200,000 daily workers are not expected to return this year. The ramifications of Covid-19 have been compounded by downtown violence sparked by racial unrest in the wake of the George Floyd killing. That fragility and community distrust of the Minneapolis Police was on full display the evening of Aug. 26 when violence erupted on Nicollet Mall following a suicide that protesters mistook as another fatal police shooting of a Black man. By morning, many restaurants and retailers throughout downtown were once again sweeping up shattered glass and assessing lost inventory.

“This is a tragedy any way you look at it: senseless violence, loss of lives, and destruction of property,” Tennant said the morning after that latest riot. “We need to support our local hospitality and tourism businesses – not destroy them – as they provide necessary jobs and economic opportunities for many of our workers and the community.”

Minneapolis isn’t the only place hurting. The pandemic-related travel downturn has cost Minnesota roughly $5 billion in travel spending losses from mid-March through August, according to Explore Minnesota. A new survey from the state’s tourism office confirmed what’s apparent to anyone who has gotten out of the city to visit a state park or tried to book a cabin rental up north: resorts and lodging in greater Minnesota fared better than properties in the metro area this summer. Compared to 2019, 61 percent of the 307 Minnesota lodging businesses surveyed said revenue was down and 58 percent reported decreased summer demand. Most expect fall to be the same.

In contrast, 31 percent of respondents to the Explore Minnesota survey said business has surpassed pre-Covid levels.

“With more Minnesotans vacationing in state and regional travelers from drive markets, segments of our industry such as resorts, camping and outdoor recreation saw an increase in customers,” Explore Minnesota state tourism director John Edman said in a statement. “However, with business travel, conventions and large events canceled, many saw steep declines in revenue that will be difficult to replace.”

Approximately a third of American travelers have tentative trip plans for the remainder of 2020, but largely to see loved ones, enjoy nature, and avoid crowds, according to Destination Analysts.

Cities will likely be last to recover tourism business, and Minneapolis could be a particularly hard sell, which puts pressure on the organization that markets the city based in large part on its downtown assets. “One of the things that distinguishes us is the fact that we have a vibrant downtown,” Tennant said.

Still, Tennant said there are “glimmers of hope,” like a “robust” list of meetings on the Minneapolis Convention Center’s 2021 calendar.

Meet Minneapolis takes the long view, Tennant said. “We’re not just booking events for the next year; we’re booking 10 years into the future too.” He’s setting his sights on one of the next big opportunities Minneapolis will have to showcase itself on a national stage: the Women’s NCAA Final Four in 2022.