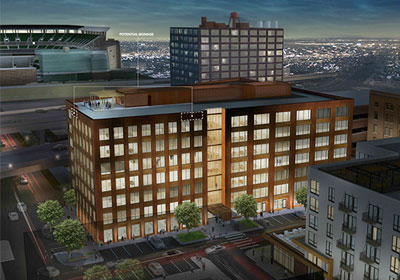 Minneapolis’ Office Building Of The Future Will Be Made Of, Uh, Wood?

The 210,000 square foot T3 office building, planned to be built in Minneapolis' North Loop neighborhood, would be the tallest building in the U.S. made primarily of wood.
March 07, 2015

When the Hines development company unveiled plans for a new office building in the North Loop section of Minneapolis last November, they received the requisite amount of coverage, even a write-up in the Wall Street Journal.

But given the frequency of construction announcements in the midst of downtown's boomlet, the significance of what its builders call T3 got a bit lost. Too bad, because if the seven-story, 210,000 square foot office building is completed, it will not only be one of just a handful of tall buildings in the world made primarily of wood — it will be the first such building in the United States.

An intriguing, if untested, technology
Pretty bold for a building being advanced without a tenant. During a presentation on T3 (for “Timber, Technology and Transit”) before the Minneapolis Heritage Preservation Commission earlier this month, Hines’ director of development, Robert Pfefferle, said the company is still talking to prospective clients about occupying the building. There wouldn't seem to be a shortage of interest: the site for T3 is surface parking behind the Dock Street Flats at 333 Washington Avenue N., a trapezoidal parcel that abuts the I-94 ramps from 3rd Street N. and the Cedar Lake Trail. “There is a suburban-to-urban migration that is happening on a national basis and the North Loop is an attractor for these knowledge workers, tech workers,” Pfefferle said.

Beyond the name that tries to connect with younger workers and entrepreneurs, beyond the modern graphics, T3's novel building materials have the potential to make it an “it” building both regionally and nationally. Perhaps that is why Houston-based Hines is willing to take a chance on what is an intriguing but still uncertain technology.

Pfefferle fended off a request to talk further about the project until spring, and lead architect Michael Green of Vancouver didn’t respond to calls and emails. But he has done plenty of talking in the past, especially about his ideas regarding wood, as both a building technology and a response to climate change.

Indeed, the proposed design isn’t simply a concrete and steel building with lots of wood trim and accents. It is fundamentally different —  a building made of wood. And those who are expecting a 21st century version of the structures that remain dominant in the Warehouse District will be disappointed or surprised. Those massive, old-growth timbers used a 100 years ago (think the interior of Butler Square) aren’t much available anymore. Instead, the material to be used in T3 is modern, what architect Green calls “new-technology wood” or Mass Timber construction.

“This building is very unique,” Green told the commission. “It is the first large-scale office building built of timber in America. It is part of a revitalization of century old ideas of how to build buildings.” At a TED talk in 2013, Green spoke about of the magic of wood: “I’ve never seen anyone walk into one of my buildings and hug a steel or concrete column. But I’ve actually seen that happen in wood buildings.”

Not everything in the building will be made of wood; the foundation and first story will be concrete and steel. But both the elevator core and the floor plates are assembled from solid columns and panels of engineered lumber. The panels vary in size but can be made as large as eight feet by 64 feet and as thick as a few inches up to 16 inches. Built elsewhere and trucked to building sites, the panels can be assembled more quickly than traditional steel and concrete buildings. One description of the process is familiar to anyone who has assembled IKEA furniture: “Flatpack.”

“Ultimately these are very large, very dense solid panels of wood,” Green wrote in his manifesto, “The Case for Tall Wood Buildings.” [PDF] Cross Laminated Timber is made from laminated layers of milled lumber set at 90 degree angles, Laminated Strand Lumber is made from a matrix of thin wood chips and Laminated Veneer Lumber is made from thin laminations of wood, similar to plywood but on a much larger scale, Green noted.

His firm has designed what will be North America’s tallest mass timber building, The Wood Innovation and Design Centre in Prince George, British Columbia. While it is just seven stories, Green believes such buildings can be taller, a claim backed up by a study conducted by the international architecture-engineering giant Skidmore, Owings & Merrill (SOM). SOM's Timber Tower Research Project, led by Bemidji native Benton Johnson, thinks a 40-story building constructed of mass timbers connected with reinforcing steel through concrete joints is feasible.

“Education of the public on the differences between wood stud and Mass Timber is an important effort in bringing these ideas to the market,” wrote Green, who is something of the Pied Piper of “Plyscrapers.”

“How we address climate change in buildings is a cornerstone in how the world will tackle the need to reduce emissions of greenhouse gases and indeed find ways to store those same gases that are significantly impacting the health of our planet,” Green wrote in “The Case for Tall Wood Buildings.” Other industries including autos and energy production are adopting new technologies to respond to climate change, he wrote, but not construction. Concrete production represents roughly 5 percent of world carbon dioxide emissions.

Green said the obstacles for wood buildings are less technical than regulatory. In a 2013 interview with the Council on Tall Buildings and Urban Habitat, Green said building codes are an obstacle “because this is the first new way to build a tall building in a hell of a long time…So I often say the hardest part of the job isn’t the engineering, it’s the managing of public perceptions of the issues, and it’s education.”

Dan Callahan, supervisor of the city of Minneapolis’ plan review section, said he has had several meetings with the T3 team to talk through building code issues. The building would fit under code sections for heavy timber buildings. The code limits such buildings to six stories but the seven-story T3 is proposed as six stories of mass timber construction on top of a foundation/basement and first floor of concrete and steel. Recent updates to the International Building Code include provisions for cross laminated timber panels.

Callahan said he expects further meetings to get more information and to present the design team with other issues the city has before a formal permit application is received.

Governments are interested in the technology partly as a response to climate change, but also as a means of reinvigorating timber communities and timber workers. U.S. Agriculture Secretary Tom Vilsack announced new training programs to encourage architects, engineers and builders to look into advanced wood building materials. The program, part of the “Made in Rural America” initiative, also includes a $2 million award to a project that demonstrates the viability of sustainable wood products in high-rise construction. Entries in the competition were due last December 8, after T3 was unveiled.