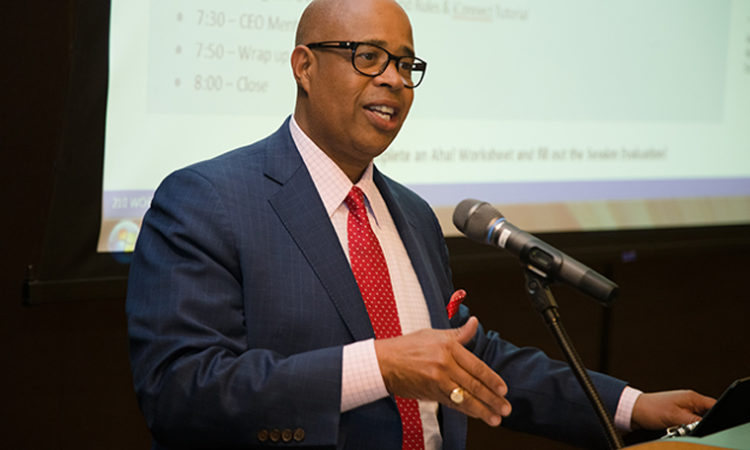 MEDA CEO Gary Cunningham: âWe want to assist businesses that would create jobs and economic opportunities within the community.â (Courtesy of MEDA)

The Mini MBA program offers subsidized classes geared toward arming business owners with the skills and expertise needed to become effective managers, including how to design a set of strategic goals needed to expand their businesses in the next three years.

The Mini MBA also provides participants with marketing skills to promote their products and increase sales through the rigorous seven-month program, which also connects them to the resources needed to improve their businesses and achieve their growth plans.

The curriculum used for the Mini MBA program is based on a successful training model designed by Interise, a Boston-based small-business assistance nonprofit. Over the years, the model has been expanded to more than 70 cities nationwide, including Chicago, Nashville and Atlanta.

When these kinds of businesses are supported to become successful, said MEDA CEO Gary Cunningham, they create employment opportunities for people of color, who have some of the highest unemployment rates in Minnesota.

“We want to assist businesses that would create jobs and economic opportunities within the community,” he added. “MEDA has been working with some of the largest minority-owned businesses for a number of years. What we want to do now is help accelerate those businesses so they grow faster and are more sustainable.”

The Minnesota Small Business Association (SBA) first brought Interise’s curriculum to the state in 2007. At the time, it offered an annual business administration courses to all entrepreneurs in Minnesota.

Unlike the course offered by the SBA, however, MEDA’s new Mini MBA program is tailored for ethnic minority business owners, such as African-Americans, Latinos, Asians and immigrants of color.

The program has several qualifications. Entrepreneurs, for example, must have revenues that range between $250,000 and $10 million to participate in the program. They also must own at least 50 percent of the business and have one full-time employee or more.

While the estimated cost for each program participant is about $10,000, MEDA has significantly subsidized it for all everyone in the program. They only have to pay a “commitment” fee of $1,000.  “And when they graduate, they’ll receive $500 back, said MEDA Program Manager Domonique Scott. “The goal is to graduate 100 percent.”

MEDA expect big things from Mini MBA participants, based on the outcomes that other programs using Interise’s curriculum have seen. According to data from MEDA, for example, 70 percent of those who participated in similar nationwide programs in 2015 increased or maintained their annual revenues, and the average annual increase in revenues among participants was 43 percent.

“We’re hoping to be able to meet those expectations, and even exceed them,” Scott said.

While in the program, participants will develop a three-year strategic growth plan for their respective businesses. Once they complete the plan, they will present their plans to MEDA guest experts for further assistance and feedback. “That will be one aspect that will hopefully set them up for success,” Scott added, “because that’s going to be a very good output.”

After graduation, MEDA assigns participants consultants who will help them implement the strategic growth plan and connect them to resources that would help them expand their revenues.

The ultimate goal of the program, said Cunningham, is more than just helping entrepreneurs of color become successful. It’s about creating jobs and improving the lives of underserved communities in the Twin Cities metro area.

That’s one reason Ben Dossman, owner of the Fat Chance restaurant, is participating. The restaurant already has 23 employees and three locations in Brooklyn Park and Eden Prairie, but Dossman wanted to get a better insight on how to grow the business. “I want to make sure we’re on the right path and learn from other business owners,” he said.