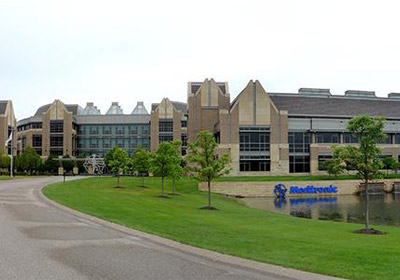 Medtronic will maintain its operating headquarters at its home address until now, in Fridley.
June 28, 2014

Medtronic, long a star of the prestigious Fortune 500 roster, is on course to be kicked off the list as a result of its plan to relocate its headquarters to tax-friendly Ireland.

The move is part of the $42.9 billion acquisition, announced late Sunday, by Medtronic of Dublin-based Covidien. The deal has tax implications favorable to the combined companies' financial structure, but the tax consequences of the transaction got little mention in the press release announcing the deal.

“This transaction is strategic first,” Medtronic CEO Omar Ishrak told the Financial Times. “The financial structure and optimization of tax discussion came after. The tax rates for Medtronic do not change a significant amount, but the structure gives us access to the cash generated by Covidien assets abroad, which we can then reinvest into US technologies.”

Under current laws, U.S. corporations pay taxes to nations abroad on the profits they earn there, but they can't easily bring those profits back to the U.S. without having them taxed at higher U.S. rates. The Covidien deal is designed to enable Medtronic to deploy its foreign profits in the U.S. without incurring the higher U.S. tax levies.

Ishrak also promised that the company's new financial structure will enable it to commit $10 billion more, “above and beyond Medtronic's and Covidien's current plans,” to technology investments in the United States over the next decade. Medtronic will maintain its operating headquarters at its home address until now, in Fridley. More than 8,000 of the company's 46,000 worldwide employees work in Minnesota (before the Covidien deal). It's not clear how many executives will staff the headquarters in Ireland.

Ishrak stressed other positive aspects of the deal, which is a friendly takeover by Medtronic. He said the transaction will give the company more flexibility, strengthen existing markets and help build new ones.

One not-so-positive aspect of the deal for Medtronic is that it could open the floodgates for a new rush by U.S. corporations to shift their headquarters offshore. That, in turn, could spark renewed backlash against large U.S. corporations that shift their headquarters offshore. Controversy about that trend flared into public view in April after Pfizer, the big pharmaceutical maker, announced its intent for a $119 billion hostile takeover of U.K.-based AstraZeneca. Later, the deal collapsed and the controversy eased.

In a front-page article Monday, The Wall Street Journal described the deal as “the latest in a wave of recent moves designed—at least in part—to escape U.S. corporate tax rates.” The Financial Times said the transaction “will enable Medtronic to shift its tax base away from the US in a move known as an inversion, whereby it will assume the lower-tax domicile (in Ireland) of Covidien.” The Bloomberg News headline read: “Medtronic is Biggest Firm Yet to Renounce U.S. Tax Status.”

In the Twin Cities, Paul Vaaler, a professor at the University of Minnesota's Carlson School of Management, told KSTP-TV that “I think at the beginning and at the end, this deal is about taxes. It moves Minnesota's effective corporate tax rate from that of the U.S. and Minnesota … to that of Ireland and that lowers the tax bill of Medtronic.”

KSTP also quoted Ishrak as saying the deal could lead to “another 1,000 jobs” for Minnesota over the next few years. In a statement, Gov. Mark Dayton hailed that as “tremendous news” for the state. Many such claims, and others, have been made and not realized for large corporate mergers in Minnesota and elsewhere in the past, and conditions can change. Time will tell how this merger works out for Medtronic's various constituencies.

U.S. corporate leaders have long criticized the country's federal corporate tax rate  as a handicap in competing globally.  Studies have found that the U.S. statutory rate of 35 percent is the highest for any developed country, and many developing nations, in the world. However, various  tax laws and rules enable many corporations to avoid the statutory rate and instead pay much lower rates. Medtronic's effective rate is currently about 18 percent. Ireland's statutory rate is 12.5 percent. In the company's conference call with securities analysts Monday, Medtronic CFO Gary Elllis said the deal would lower the effective tax rate for the combined companies by one to two percentage points below the blended rate for the merged company. He did not say what the blended rate would be.

In 2005, Congress granted U.S.-based multinationals a temporary tax holiday, allowing them to bring profits from overseas operations back to the U.S. at a lower rate. Today, according to Bloomberg, large U.S. corporations have accumulated more than $1.95 trillion in retained earnings overseas. General Electric is the leader, accounting for $110 billion of the total. Ishrak, who came to Medtronic as CEO three years ago from GE, has been among those advocating publicly for another tax holiday.

The Fortune 500, now in its 60th year, is considered the granddaddy of corporate lists. The latest annual list, which ranks the 500 largest U.S.-based public companies by revenue, appears in the magazine's current issue. Twin Cities economic developers and marketers have long touted the fact that Minnesota (largely the Twin Cities area) invariably lands 15 to 20 companies on the list. This year's list includes 17 Minnesota companies, a far greater concentration than would be expected based on the state's population. Medtronic, seen as a high-tech growth company, has been one of the roster's standouts, marching steadily up to 173rd place this year with 2013 revenue of $16.6 billion.

Had Medtronic and Covidien been merged in time for this year's list, the combined operation would have blended revenue of $27 billion, enough to rank 110th. But that's not going to happen unless the magazine changes its existing rules.

“As per our current rules, if Medtronic reincorporates outside the U.S., it will be removed from the list,” Michael Cacace, Fortune's senior editor in charge of lists said in an email to MinnPost. That's because the magazine's current rules require that companies in the Fortune 500 be American companies, meaning they must be domiciled in the United States.

Asked by email whether Medtronic will try to persuade Fortune that it should remain in the Fortune 500, Rob Clark, vice president, global communications, replied, “We are aware of the policy that Fortune magazine has in this regard and will not be engaging the magazine on this matter.”

Fortune's current issue includes a column, by longtime business journalist Allan Sloan, saying foreign tax ploys raise the question of how to define “an American company.” For the Fortune 500 list-makers' purposes, it's a company which, like Medtronic, is domiciled in the U.S. Sloan reported that since 2000, Fortune 500 overseers have tossed out eight companies that moved their headquarters out of the U.S. Some critics have dubbed such enterprises “runaway companies.” The companies are:

Pfizer, ranked 51st on Fortune's new list, would have been booted from the roster next year had its plan, designed in part to take advantage of the U.K.'s more favorable tax climate, succeeded. Walgreen, another high-profile Fortune 500 mainstay that ranked 37th, will be ousted from the ranking if it moves its headquarters abroad. Hedge funds have been urging the venerable, Chicago-based drugstore chain to lower its taxes, thereby increasing shareholder value, by moving its headquarters to Switzerland.

Sloan noted that “another famous 500,” the S&P 500 Index, followed Fortune's practice from 2002 to 2009, tossing out of its index nine companies that had moved abroad to gain tax advantages. That hurt these firms' stock prices, since many “index investors” buy only companies in the S&P 500. But Sloan reported that  S&P decided to restore eight of the nine companies to the index after “catching heat” from the companies and investors.

Dropping Medtronic from the Fortune 500 likely would be dismissed by many as not having any significant impact on the company or, for that matter, on the Twin Cities economy.  But such a move shines the spotlight on how much large U.S. multinationals, by moving their headquarters offshore and through various other moves, have become increasingly committed to shareholders around the world as opposed to various stakeholders in the U.S.

A longer version of Sloan's column, which appeared in the Washington Post, notes that 28 U.S. companies in the S&P 500, including high-profile Sara Lee in Chicago, have quietly shifted their headquarters from the United States to other countries since 2008.

Proposals have emerged in Congress to prevent drains on federal tax revenue by discouraging companies from setting up headquarters abroad. One plan, by Representative Sander Levin, D-Mich., would generate $19.5 billion revenue over the next decade.

Bloomberg reported Monday that 44 U.S companies have reincorporated abroad or struck plans to do so since 2008, including 14 since 2012. “Such transactions have begun to snowball within parts of the health-care and oil industries as companies still without a foreign domicile try to catch up with those that have gone offshore,” the news service reported.

Bloomberg also said Medtronic's plan differs from other inversions in that it involves taking the Irish address of a company that is not run from Ireland. Most of Covidien's sales and 19 of its 41 factories are in the U.S. Covidien's foreign headquarters traces back to 1997, when its corporate predecessor, Tyco International Ltd, moved its headquarters to Bermuda in 1997. In 2009, Covidien's headquarters moved to Ireland.

Sloan is no fan of such moves. As he put it in his column: “Can we and should we stop U.S.-based companies from continuing to benefit from what our country has to offer—things such as our financial markets, legal system, intellectual infrastructure and abundance of great places to live—without paying their full freight? It's letting them eat their cake and have it, too.”