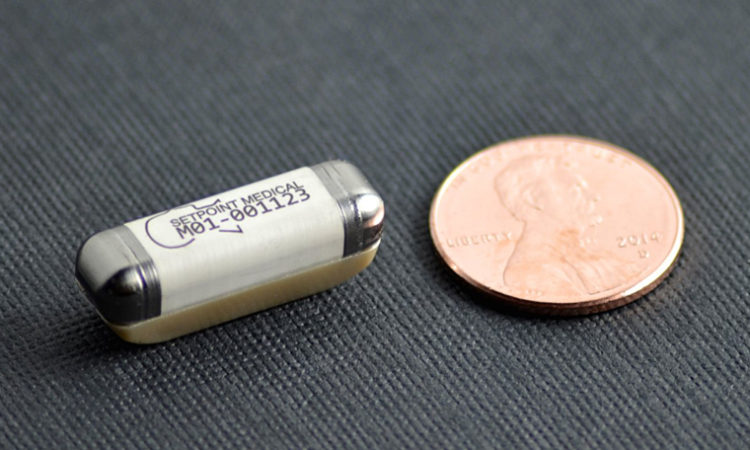 The California startup has raised over $100 million from investors since its 2006 founding.
By Sam Schaust
August 29, 2017

Valencia, California-based SetPoint announced the closing of what was one of its largest funding rounds ever on Monday.

Both Medtronic and Boston Scientific have funded SetPoint in the past. Medtronic, which has its operational headquarters in Fridley, took part in the Series A round through an investment from Covidien, an Irish medical device maker it acquired in 2015. Boston Scientific also participated in SetPoint’s Series A. The Massachusetts-based medtech company is one of Minnesota’s largest employers with roughly 7,200 workers locally.

“We are grateful for the strong support from our investors who are aligned with our vision to commercialize life-changing bioelectric medicines for patients with debilitating inflammatory diseases,” said Anthony Arnold, chief executive of SetPoint, in a statement.

SetPoint, founded in 2006, is developing an implantable device that can “activate” the body’s natural inflammatory reflex and produce a systemic anti-inflammatory effect. The company claims its device addresses an unmet need that could treat diseases such as rheumatoid arthritis, which have historically been treated with drugs.

“Rheumatoid arthritis patients and the physicians who treat them desperately need new treatment options for dealing with this debilitating disease,” said David Chernoff, chief medical officer at SetPoint, in prepared remarks. “Current biologic treatments for [rheumatoid arthritis] do not work for all patients, are very expensive and can have severe side effects. With more than $30 billion spent annually on biologic agents to treat inflammatory diseases, the time is right for a new approach, and bioelectronics medicine shows promise as an alternative to conventional therapies.”

SetPoint, which has raised over $100 million from investors in its lifetime, is set to begin its new clinical trial using the funds from its Series D round.

“SetPoint has good momentum and this financing provides the capital to bring bioelectronics technology one step closer to the clinic by enabling the next clinical trial in rheumatoid arthritis,” Arnold said.