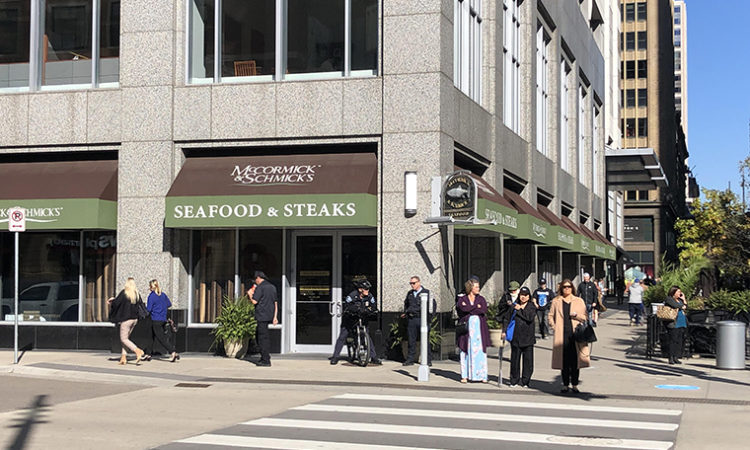 The restaurant operates on the first floor of the US Bancorp Center at 800 Nicollet Mall. (Photo via Colliers International)

The restaurant is negotiating a lease extension with the landlord, spokeswoman says. If negotiations fall through, the space becomes available June 1.
By Dan Niepow
January 03, 2020

Another prominent tenant in downtown Minneapolis may be moving out.

The space currently occupied by upscale seafood restaurant McCormick & Schmick’s on Nicollet Mall has been listed for lease. The property is available starting June 1. Commercial real estate firm Colliers International is handling leasing for the 9,968-square-foot space at 800 Nicollet Mall. The space comes at a cost of $16.96 per square foot, according to the listing.

“We are negotiating a lease extension with the landlord,” she said in an email.

Colliers agents deferred all media requests to Piedmont Office Realty Trust, which owns and manages the space. Piedmont didn’t immediately respond to requests for comment. McCormick & Schmick’s has been operating on Nicollet Mall for more than 15 years. The downtown location is one of two in Minnesota; the other is at the Westin Galleria Hotel in Edina. There are more than 30 McCormick & Schmick’s restaurants across the country.

If the lease negotiations fall through, McCormick & Schmick’s would be the latest in a long list of Nicollet Mall closures over the years. Most recently, Rojo Mexican Grill (formerly Ling & Louie’s) shuttered in late October. Other closures include Masa, Vincent, and Ichiban Japanese Steakhouse.

The Colliers leasing document also lists the space now occupied by Men’s Warehouse. That 6,200-square-foot space also would be available June 1. In addition, the document shows openings for two small retail spaces in the skyway above the store and restaurant.

McCormick & Schmick’s operates on the first floor of the US Bancorp Center, which was built in 2000.