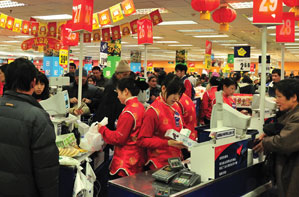 How can businesses successfully market their products and services abroad?
February 11, 2009

One size does not fit all when it comes to international marketing. Messages must be customized to specific markets.

“When you go international, you have to have a very good understanding of who your audience is, and what motivates them to buy your product,” says Christa Tiefenbacher-Hudson, managing director of multilingual marketing communications firm TripleInk in Minneapolis.

Implementing a marketing plan in another country is more involved than putting a picture of a person with the “right” ethnicity into a sales brochure says Deb Fiorella, principal at Franke + Fiorella, a branding and identity design company in Minneapolis. To learn customer preferences, experts say marketing groups must conduct research on the ground in the target market, preferably using native speakers to conduct customer interviews to find out what the non-English speaking population thinks. TripleInk used a similar strategy to help 3M avoid a marketing blunder as it prepared a marketing campaign for Post-it Notes in Latin America.

“The U.S. ad campaign promoted the use of the product in quite unusual ways, including as a fig leaf on Michelangelo’s David statue,” Tiefenbacher-Hudson says. TripleInk was asked to adapt the campaign to the Latin American market. “Culturally, the David statue concept was not an issue; the issue was the fact that consumers were not familiar with Post-it Notes, period,” she says. TripleInk recommended that 3M nix the David campaign because it was designed for “a mature product in a mature market, and not to introduce a new and innovative product to a new market,” she says.

Using native speakers is critical to tailoring marketing messages for foreign markets. “Linguistics are important when it comes to writing copy, developing brand names and tag lines, and overall strategy development,” Fiorella says. Her firm is currently working with a large agricultural company to launch a new brand. That company’s brand name underwent linguistic checks in 21 languages, including 16 Indian languages, to ensure that the name is attuned to the target market’s culture, is easy to say, and doesn’t have any negative connotations.

Idioms can be particularly difficult to translate. TripleInk worked with 3M’s Scientific Anglers, a brand of fly-fishing gear, to translate a print ad for a French language magazine in Canada. The tagline for the U.S. print ad, “The method to the madness,” was translated by the Canadian magazine to La mÃ©thode Ã  la folie, which roughly means “the method to craziness,” Tiefenbacher-Hudson says. TripleInk recognized this slightly off-kilter interpretation during proofing and changed it to Donner matiÃ¨re Ã  passion, a more spot-on wording, which means “giving substance to passion.”

Marketing design elements must also reflect the preferences of an audience. Fiorella says that imagery should be appropriate, and not only in terms of ethnicity; clothing styles, hairstyles, and locations also need to be considered. Color palettes also differ from region to region: “For example, in China, colors are intense and very bold. In Japan, there’s more of a range of pastel colors that you wouldn’t find in China.”