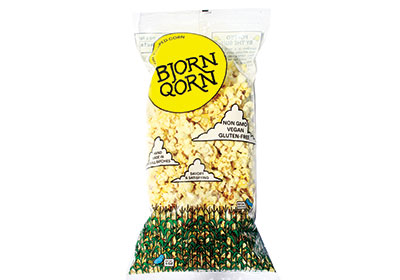 Making Popcorn With The Sun

Does popping corn with the sun make the business pop?
January 01, 2017

Bjorn Quenemoen is the first generation not to manage his family’s 130-year-old farm in southwestern Minnesota. Instead, he’s using the farm’s land to grow popcorn for his Kerhonkson, New York-based solar popcorn business.

“In the ’80s and ’90s farming didn’t seem the most stable career, so [my sisters and I] were not encouraged to do that,” explains Quenemoen. “This is an interesting way to stay involved and do something different with the land, while keeping me connected with my father from a distance.”

Hudson Valley-based BjornQorn combines solar thermal energy with Minnesota-grown corn to create solar-popped popcorn. The system, developed by co-founder Jamie O’Shea, involves suspending popcorn kettles over 17-foot-wide basins lined with mirrored reflectors. The basins are built into the ground and use reflective light from the sun’s rays to produce heat to warm the kettles.

“When we first started, the solar angle was partly a way to create interest,” says Quenemoen. “It was a good story to tell and it separated us from other products.”

The solar aspect isn’t the only thing attracting customers. The popcorn is seasoned with a nutritional inactive yeast, which adds protein and vitamins, providing vegan appeal. “We loved the taste, it was unique from other popcorn snacks and we get complaints when we run out,” says Mary Richter, culinary director of Minneapolis-based Surdyk’s Cheese Shop.

BjornQorn launched in 2012. Today, about 80 percent of its corn is harvested at the family farm in Clarkfield, and the remainder comes from Hudson Valley. With Quenemoen’s father’s recent retirement, a neighbor will take over next season’s harvest on the family’s farmland.

Production occurs twice a week, producing anywhere between 925 to 2,500 bags per production day.

BjornQorn has doubled sales every year since it launched, but with no employees and limited equipment, Quenemoen reached maximum capacity in March, due in part to a hefty order from his largest client, New York City-based Le Pain Quotidien, a Belgian bakery chain. The order increased sales by 50 percent.

Hoping to double sales to $500,000 in 2017, Quenemoen and O’Shea are working to open a new production facility in Kerhonkson by February. It will be indoors and use more conventional equipment, allowing the business to increase production and hire help. “Solar panels have gotten cheaper and are more efficient,” says Quenemoen. “But that doesn’t mean we will stop research on solar thermal.” —Kate LeRette