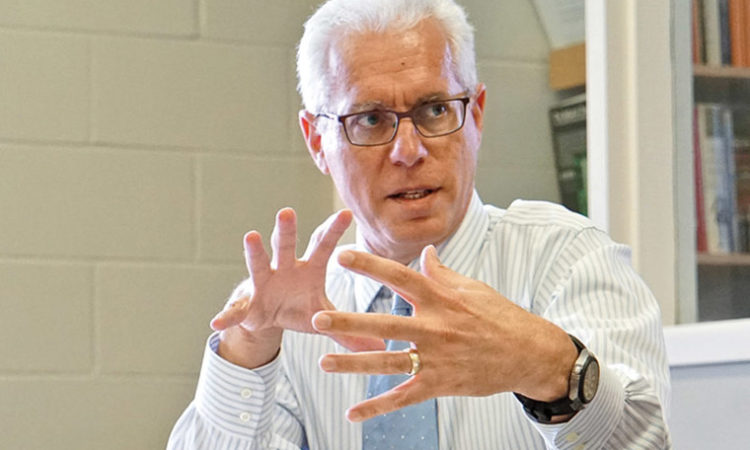 Rosenberg is leaving after 16 years in the role in part because he doesn’t want to “overstay” his welcome. Plans for the process to find his replacement will be shared next week.
By Amanda Ostuni
April 08, 2019

Macalester College has a leadership change to prepare for, as current president Brian Rosenberg just announced that he plans to resign next year. His departure, effective May 31, 2020, comes after 16 years as the school’s leader.

Rosenberg, who became president of the college in 2003, did not provide a reason for his decision in a letter to the Macalester community, but in an interview with student newspaper The Mac Weekly last September, he had hinted at his plans.

“I have made a promise to myself from day one that I try not to outstay my welcome,” Rosenberg told The Mac. “I’d rather leave before that happens. And again, for all I know it’s happened already, but I have my own timeframe for that.”

With the timeline now set in his resignation notice, Rosenberg reflected on his experience leading the school.

“The opportunity to serve as President of Macalester has been by far the greatest privilege of my professional life,” Rosenberg wrote. “The longer I have stayed, the more impressed I have been by the excellence of our faculty, the dedication of the staff… and especially the passionate determination of our students and alumni to create a more just and peaceful world.”

In response to Rosenberg’s letter, Jerry Crawford, chair of the Macalester College Board of Trustees, thanked Rosenberg for his leadership.

“I believe he is one of the best presidents in the history of our college, and his impact will be felt long into the future,” wrote Crawford.

Recent achievements Macalester has made under Rosenberg include being named a top Peace Corps 2019 volunteer-producing school—supporting Rosenberg’s comment on the socially conscientious nature of the student body—and successfully completing a $100 million fundraising campaign Rosenberg dubbed “The Macalester Moment.”

Macalester has also grown its entrepreneurship program, landing a Richard M. Schulze Family Foundation grant in 2017 to aid in that growth in the form of startup education-focused summer internship opportunities, and in 2014, Macalester was one of two Minnesota higher education institutions to make Forbes’ list of top 100 U.S. Colleges.

Rosenberg said he hopes that in the next 14 months before his departure, he can set Macalester up for success after he’s gone.

“Macalester’s best days lie not in its past or present but in its future,” wrote Rosenberg.

As for his own personal plans after resignation, Rosenberg told The Mac he’s not sure exactly what he wants to do—only that he doesn’t intend to do nothing, but also doesn’t intend to be a president at another school, since it wouldn’t bring the same engagement he found at Macalester.

Crawford said the school will share plans for its search to replace Rosenberg next week. Their will be opportunities for campus community members to participate in the search, and the executive hiring firm Spencer Stuart will lead the process.