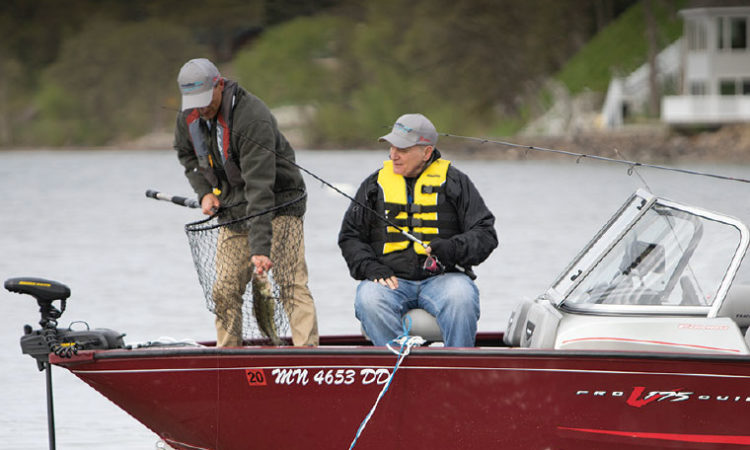 Gov. Mark Dayton reeling in one of his catches at the Fishing Opener.

Towns across the state bid for the right to be the official host of the fishing opener. Oftentimes, the exclusivity can cost hundreds of thousands of dollars.
By Burl Gilyard
February 01, 2019

The Minnesota governor’s fishing opener has been an annual rite of spring since 1948. Behind the scenes, it’s also a yearly battle among cities to land the event, which typically draws lots of media coverage. The state issues a RFP to select host communities. The deadline for the 2020 event closed in mid-December; the selection won’t be announced until the 2019 opener in Albert Lea.

Only a handful of communities submit proposals, typically two to six cities. “It’s quite a heavy lift,” says John Edman, director and CEO of Explore Minnesota, the state tourist agency that sponsors the shindig. “It’s a lot of time and it’s a lot of effort.”

It also takes money. The RFP notes that recent hosting budgets have ranged from $120,000 to $350,000, including cash and in-kind donations. Community groups—usually chambers of commerce, resort associations, convention and visitors’ bureaus—look to sponsorships and raffle tickets to raise funds. The RFP also says that communities need to provide “complimentary lodging for an estimated 350 registered guests—media, sponsors, and invited guests.”

The 2018 opener in May cast off in the Willmar Lakes area. Gov. Mark Dayton dropped a line to catch three bass in Green Lake near Spicer.

“It brought a lot of people to our area,” says Beth Fischer, executive director for the Convention & Visitors Bureau, a division of the Willmar Lakes Area Chamber of Commerce. “I think the publicity value alone is great for the community.”

Fischer says that the operation had a steering committee of 25 and about 400 volunteers. She declines to disclose the budget for the undertaking but notes that the state estimated the publicity value at $1.2 million.

The final call for the location is an executive decision made by the governor. Outgoing Gov. Dayton selected Albert Lea, where new Gov. Tim Walz will host his first opener as the state’s highest-elected fisherman in May.