Looking on the Bright Side

People want solar power. Solarflow Energy wants to help them overcome the barriers to getting it.
May 11, 2011 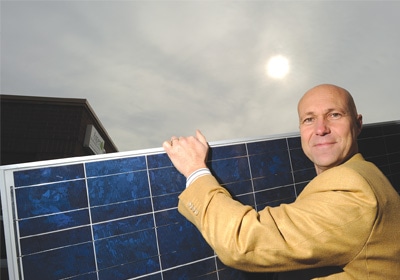 We don’t have to sell anything,” says Gerardo Ruiz, CEO of St. Paul–based solar power installer Solarflow Energy. “People are sold on solar already when they come to us.”

They may be sold on solar, but can they afford it? While Ruiz’s three-year-old company sells solar systems to government and larger commercial customers, those systems’ capital expense can be daunting for householders and small businesses.

That’s why Solarflow is offering a leasing option. The company tested the market for leasing solar equipment during a 13-month pilot program, which was seeded with a $1.4 million grant from Xcel Energy. When the pilot ended in December 2010, Solarflow had installed 280 kilowatts of solar capacity in 18 residences and seven commercial enterprises in the Twin Cities metro. “Solar is still new to Minnesota,” says Tim Edman, Xcel’s manager of regulatory administration. “It still needs testing and it still needs support.” The pilot showed that the metro-area market is interested in solar, Edman adds.

One of the pilot’s customers was St. Paul–based commercial real estate firm Wellington Management, which tapped Solarflow to install a solar power system on a Roseville building. About a month after the solar power system was fully operational, Minnesota recorded its snowiest December ever, which cut into expected energy gains from the system.

“It’s like wind turbines working great when the wind is blowing,” notes David Bergstrom, Wellington’s director of project management and construction services. Still, Wellington was pleased with the overall project. Solar power “reflects well on the property owner and the tenants in the building,” Bergstrom says.

According to Xcel’s Edman, “we have seen higher solar deployment and lower solar prices” over the last year. If those prices continue to decrease, leasing a system may become an affordable option for residential customers. At this point, current rebate programs don’t support leasing, Ruiz says, so Solarflow provides “finance-to-own solutions or straight-up sales.” The company focuses on commercial customers, which can buy panels supported by a state subsidy program. Solarflow’s 2010 revenue was around $2 million. Solarflow also has help from equity investor Abengoa Solar, a company based in Spain, Ruiz’s native country.

“Fossil fuels have been subsidized for decades,” Ruiz says. “With a little bit of help in the short term, solar can compete.”