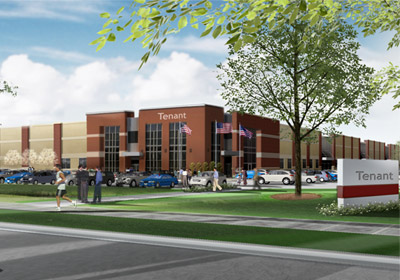 Minneapolis-based CSM Corporation is the latest commercial real estate player to charge ahead with new, speculative industrial property development in the Twin Cities.

On Wednesday, CSM revealed plans to add nearly half-a-million square feet of industrial space in the northwest region of the metro: a 270,000-square-foot project in Rogers and a 202,000-square-foot facility in Brooklyn Park.

“Spec” projects are a sign of optimism in real estate markets when a developer rolls the dice to build a project without having inked any lease deals with tenants. During the economic downturn, there was little development anywhere. But today, spec projects in the industrial market in particular have been rebounding nicely.

“There’s no question that the supply is very limited. Particularly in the northwest,” Scott Moe, vice president of leasing and development for CSM, told Twin Cities Business. “Anybody over 100,000 square feet that’s looking for more contemporary space has very few options. . . . Demand is definitely increasing.”

The Rogers building (pictured below) will be a bulk warehouse facility with 32-foot clear heights. Moe said that CSM will break ground on the Rogers project in the second week of June. At the moment, Moe said that no one else has a spec project underway in Rogers.

“We looked up in Rogers and there isn’t anybody going spec up there, so we saw a window of opportunity,” Moe said. “There’s considerably more competition down in Brooklyn Park.”

In Brooklyn Park, CSM still needs to secure final city approval for the project. Moe said that CSM is hoping to be able to break ground on the office warehouse project in August.

The Brooklyn Park site has room for additional development. Two weeks ago, CSM acquired an additional 14 acres there to create a site that now total 31 acres.

“We can do three phases there and this is just phase one,” Moe said of the Brooklyn Park property.

CSM has tapped two different brokerages to handle leasing for the projects. In Brooklyn Park, Dan Swartz and his team with the local office of CBRE will handle leasing. In Rogers, Mark Sims and his team of the Minneapolis office of Cassidy Turley will lease the property. CSM has owned the Rogers site since 2007.

Moe is confident that there are enough sizable tenants hunting for new space in the market.

“Our brokers do some great ‘intel’ work for us. . . . Both of them brought in very substantial lists of tenants that were in the market looking for space right now,” Moe said. “It gave us the nudge we needed to put a shovel in the ground.”

IRET is demolishing most of an existing property there to replace it with approximately 203,000 square feet of new spec industrial space. Including 17,553 square feet of contiguous, leased space that will remain, the finished project will total about 220,000 square feet.