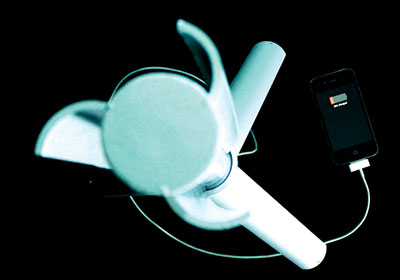 You just lit a campfire, miles from the nearest wall socket, when an all-too-familiar tone informs you that your phone is dead. A savior may be on the way, though. A native of Iceland working out of a former school building in the small southwestern Minnesota town of Clarkfield plans to revolutionize the way we charge electronic devices.

While running an East Coast investment fund, Einar Agustsson decided to redirect his energy toward developing more efficient generators that use green energy. His company, Skajaquoda, began developing products that allow people to power their phones, tablets, cameras and other devices using wind and solar power—and a successful crowdfunding campaign is helping bring the concepts to market.

The first product, Trinity, is a portable wind turbine. A smaller model ($299) has a 15-watt generator and starts as a 12-inch tube, from which emerge aluminum legs that can be propped up in a tripod configuration. There’s also the larger Trinity 100 ($499), which has a 100-watt generator. It tucks into a 20-inch cylinder when not in use.

The time it takes to charge Trinity’s battery depends on wind velocity. In a 10 mph breeze, the smaller model would generate enough power in about an hour to charge your phone, Agustsson explains.

Trinity’s Kickstarter campaign drew $75,319 from 339 backers, exceeding its $50,000 goal. Skajaquoda will bring Trinity to market in early 2015 and has received pre-orders, although Agustsson declined to specify how many. The startup is targeting travelers and outdoors enthusiasts, and has received “a lot of interest” from boat owners—but Skajaquoda is eyeing larger versions for homeowners.

Meanwhile, Skajaquoda is developing a similar product that uses solar power. The Sun Strap features a flexible solar panel sewn into fabric, which can be fastened around the strap of any bag (backpacks or golf bags, for example) using Velcro. It, too, has an internal battery and USB output, and can be used to charge electronic devices. At press time, its Kickstarter campaign was funded to 109 percent of the $15,000 goal.