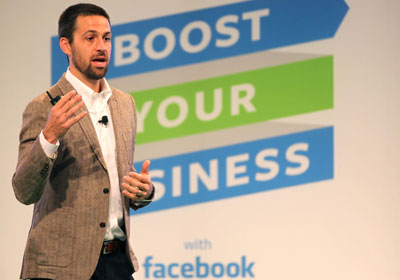 Facebook wants to share the stories of small businesses that are using their platform to thrive.
August 14, 2015

Kale Walch, co-owner of vegan meat alternative producer The Herbivorous Butcher, has this to say about the world’s largest social network.

“I don’t know if anyone would know about us, if not for Facebook.”

For Herbivorous Butcher, which will open a Northeast Minneapolis storefront this fall, Facebook has become a vital lifeline between the unique business and its potential customers. The company shares pop-up event times, displays photos of delectable meat-free dishes and calls on fans to urge restaurants to carry their items.

Listening to Walch was an audience that shares the challenge of growing a business with a limited advertising budget—800 small business entrepreneurs attending Facebook’s Boost Your Business event on July 30. Speakers at the event, held at ARIA, included Facebook’s director of small business, Jonathan Czaja, and Mari Smith, a social media marketing expert. Smith moderated a panel of local small business owners and marketers, including Walch, who discussed how the social media platform can help build awareness and drive sales.

Minneapolis is one of four U.S. cities to host the program this summer. It was selected, according to Czaja, due to the breadth of its small businesses.

“There are great, vibrant small businesses here,” said Czaja, a native of Rochester. Czaja said the Boost Your Business programs aim to educate people about Facebook’s advertising and user-targeting options, but also provide an opportunity to get grassroots feedback from those using the tools. About 40 million small businesses have a presence on Facebook, with about 2 million advertising on the platform.

Of the four companies represented on the panel—Brightpeak Financial, The Patchery, The Herbivorous Butcher and Greenwich Vintage—two of them estimated that Facebook comprises at least 90 percent of their marketing strategy. Often, however, this energy is dedicated to producing organic, not paid, content. For Brightpeak Financial, a division of Thrivent that focuses on financial solutions for young families, their Facebook page serves as a hub for spreading brand awareness. They continually run sponsored posts to increase page “likes.” But the rest of the panel largely said it preferred using the platform’s free tactics, such as groups and video-hosting capabilities.

“The only time we really [promote] anything is if the post contains a link to our online store,” said Ryan Strandjord, chief marketing officer at The Herbivorous Butcher. “It's inherently more difficult to connect with our audience when those links are included.”

The buzzword of the day was “authenticity,” frequently tossed out by both Facebook representatives and panelists. The Patchery, which produces custom-designed children’s apparel, sources clothing testers from Facebook, giving potential customers the opportunity to first-hand experience and respond to their products. Greenwich Vintage, a cobbler services that specializes in updating shoes with bright-colored rubber soles, frequently incorporates the unique personality of its owner in its marketing messages. Facebook’s post format helps showcase this personality, panelists said, because it allowed them to both show and tell their business’s story.

According to Facebook, panelists were selected with this in mind. They identified local companies that represented a spectrum of industries, had an engaging story and demonstrated a history of promoting their business on social media.

For panelists, the event offered equal parts education and promotion—Strandjord said Boost Your Business introduced him to new tools that The Herbivorous Butcher might invest in, such as geo-targeting and a posting feature that targets users based on their similarity to a list of leads. The Herbivorous Butcher also handed out samples of meat-free ‘jerky’ for people to munch on.

“The event created an opportunity for us to connect with a very different kind of audience by telling them our story and how we connect with our customers,” said Strandjord.

Audience members had the opportunity to network and chat one-on-one with panelists; Facebook and partners Mailchimp and Shopify also held practical training sessions. Future Boost Your Business pop-ups are planned for Nashville and Boston.