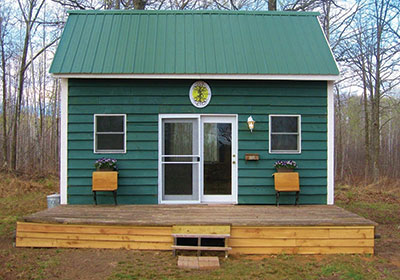 Little Green Houses On The Prairie

Two Minnesotans are jumping on the "tiny house" trend by offering plots of serene land in Ogilvie.
October 10, 2016

Serenity, solitude and the simpler life on a very modest scale.

Surviving a dorm room was quite a feat in college, but now a growing number of Americans are choosing to live in a space as tiny as that room. Two Minneapolis residents have left business careers to promote tiny-house living. Bill and Brenda Campbell created The Sanctuary Minnesota, 80 acres of serenity and solitude in Ogilvie (near Mora) for tiny-house owners and renters.

In 2000, the Campbells purchased the site for $50,000 to be used as family property. They later built a 166-square-foot house for around $30,000. Personal capital, donations and rent have supported the redevelopment into a tiny-house village. There are currently four permanent residents and one temporary one. Brenda explains that turnover is regular because of the mobility of the typical “tiny house,” many of which have wheels.

“Even though the peace and serenity of the Sanctuary may be, in part, tied to the lack of population, having others share in our interest of nature and a simpler way of life away from the city is a real desire,” Bill says on his blog at thesanctuaryminnesota.com. The Campbells are emphatic that the Sanctuary is not designed to be a diminutive trailer park.

The village has two permanent houses available for a monthly rent of $400, and six $300-per-month rentable lots where tiny-house owners can place their homes in a secluded area. The Campbells say the typical tiny house in their village is no larger than 200 square feet. Therefore each tiny house is surrounded by open space, designed to be shared by the community.

“Residents do have the opportunity to work off up to $100 of their rent by doing things such as mowing lawns and setting up for events during beautification week,” Bill says. The Campbells built a small lodge in 2014, which hosts events and offers amenities for their residents, such as a washer and dryer, kitchen, showers, bathroom and a campfire pit. Events include yoga and silence retreats, speakers and tiny-house-building workshops.

Bill says the development is profitable enough to build additional tiny houses to rent. Their goal is to have space for like-minded people to place their own tiny houses. “It’s a work in progress,” Brenda says. “We are learning as we go.” —Marissa Groechel