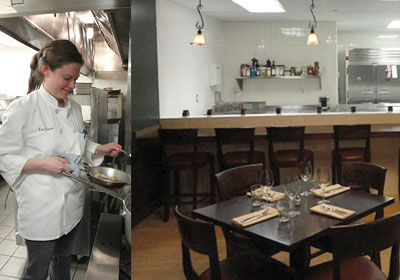 Lisa Hanson Powers Through At Her Restaurant, Mona

At the year-and-a-half mark, her restaurant, Mona, is in the black, despite a tough location. Her finance degree has come in handy.
November 06, 2013

People can’t stop raving about the food at Lisa Hanson’s restaurant, Mona. Rick Nelson of the Star Tribune calls it a hidden gem and is obsessed with her shrimp on brioche. Rachel Hutton at Minnesota Monthly says the chicken and waffles dish was the best she ever had. Dara Moskowitz Grumdahl of Mpls.St.Paul Magazine nearly fainted after trying the elk ribeye. The downtown Minneapolis restaurant opened to a flood of raves in April 2012. What it didn’t open to was a flood of people.

Location has been an issue. Mona is tucked inside the former Accenture Tower in the heart of the central business district. It’s not a destination neighborhood, unless you’re looking for a quick bite after a meeting in the building. Hanson knew this going in. It helped her negotiate.

“I was looking for some serious lease-held money from the building,” she says. “If I was going to take this risk, I expected some participation in the improvements.”

She got what she wanted. The building was happy to improve the space, as previously it had been the tacky Black Bamboo restaurant, renowned for a frat-boy decor befitting its $1 beers and mozzarella sticks. Now the space has an elegant Mad Men feel. “This would have been a half-million dollar build-out if I opened it in south Minneapolis,” Hanson says.

Hanson financed her end with her own money. She’s hesitant to disclose her financial investment, although she will say it is the equivalent of buying a nice two-bedroom house in Minneapolis. Considering this is an industry in which 60 percent of restaurants fail within the first three years of operation—and after five years, the number goes to 75 percent, according to the National Restaurant Association—this is taking on some serious risk. But Hanson isn’t a chef who’s afraid of numbers. She likes them.

Hanson has a finance degree from the University of Southern California and prior to going to culinary school had worked in the software and financial planning industries. She knew what she was getting into.

And when the restaurant opened in April 2012, things couldn’t have gone better, except for one pesky thing: not enough patrons, especially at dinner. It showed in the numbers. Her father was helping her with the books that fall and had a very direct message.

“He kept saying, ‘You’re going to need more capital.’ I was like, ‘No, I don’t; I’m going to power through, darn it!’ ” she says. She dug into the metrics and looked for ways to cut costs.

“I look at my costs 20 times a day. I’ll look at where are my sales at for the day and what are my labor costs. Point-of-sale systems make it easy. I knows who’s on the clock, sales, what’s been discounted, voids, mistakes—all that,” she says.

Hanson noticed her linen costs were too high, for one.

“All industry standards say linens should be 1 1/2, 2 percent of sales. I talked to different companies. I signed a contract, and the bills were way more than the 1 1/2 to 2 percent—it was close to 3 percent—so I went back to my sales person, and I said, ‘You told me my cost should be in this range. What do we need to do, because I can’t afford 3 percent?’ I finally had to strong-arm them, and I got a better deal.”

Labor and food, of course, are her big drivers. She’s comfortable with her choices on the food side, tweaking the portion sizes and adding some popular items, like a turkey sandwich or Michelob Golden Light on tap, while remaining true to her concept of affordable, eclectic, small-plate food. But labor? A constant adjustment.

“I don’t want to get caught without staff, but it’s so unpredictable. I can’t just pay for servers to be standing around, and it’s not good for them, either, if they’re not making money. But it’s hard to anticipate traffic,” she says, noting that labor costs should be about 35 percent of sales.

Hanson has learned to be careful about matching resources with expectations.

“My sales were almost double last July what they were this July, but last July I lost money and this July I made money, because my labor costs were so high last July: over 50 percent. Now it’s in line,” she says.

So how are her prospects? Steven Brown has traveled Hanson’s path, in terms of having a downtown restaurant with a challenging location. In the early ’90s, he ran Rock Star, which was tucked away in the Campbell Mithun Tower and got rave reviews. But it closed in less than two years. Today he has a massive hit on his hands with Tilia in the ideally located Linden Hills.

“She’s got a much better situation than I had,” Brown says. “The thing is, chefs aren’t usually great businesspeople. Finding a balance between culinary artistry and commerce is vexing. Most flounder. I wouldn’t have chosen her location, but no one doubts her talent as a chef. And she clearly has a tenacity that propelled her from chef to chef/owner. I am sure that regardless of what happens in her future, she’ll continue to be successful with the lessons she’s learning now.”

What Hanson has going for her, along with her food, is the coming density in downtown, with city planners hoping to double the number of new residents by 2025. They can’t come soon enough for Hanson. Until then, she’ll keep studying the metrics.

“I’m always thinking, ‘What have I not thought of that I’m spending too much on?’ I can say that in year two, I’m profitable, but now I need to grow.” 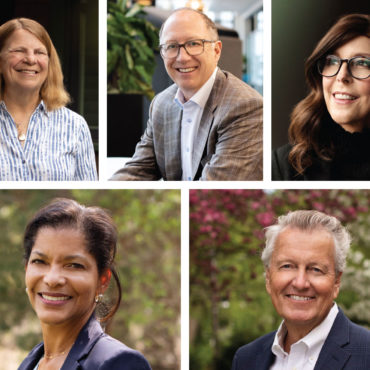