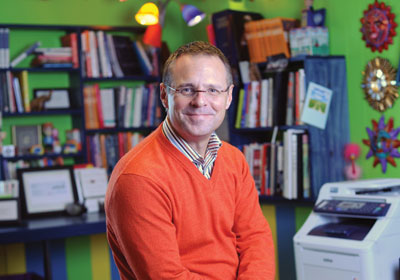 Longtime leadership consultant Paul Batz has a vision: helping leaders of all sizes of organizations find their own.

In October 2009, Batz left the president’s job at MDA Leadership Consulting in Minneapolis to start his own agency. Called What Really Works and based out of his Bloomington home, his new firm also focuses on helping businesses and other organizations set long-term goals and develop plans to achieve them. But the hyper-energetic Batz also has created a research practice and a monthly speaker series. And in February, he brings out the first in a series of books on leadership.

In his first year in business, Batz says, he landed more than a dozen clients, partnered with six veteran independent consultants, and brought in more than $500,000 in revenue. What Really Works’ portfolio of clients ranges from large corporations and family-owned companies to small social-service agencies.

“Being able to work on vision and strategy for a large church or the Sioux Falls Jazz and Blues Festival is remarkably rewarding work and similar to what we’re doing for a privately held construction company in town,” Batz says. That variety of clients, he says, “would have been nearly impossible” to do at a bigger firm.

Sioux Falls Jazz and Blues Festival Executive Director Robert Joyce asked Batz to lead a retreat of the festival’s board, which comprises mostly attorneys and accountants. “Paul has a dynamic way of finding what it is that inspires you,” Joyce says. In running an organization day to day, leaders often can lose touch with its core purpose. “He reminded us, ‘This is why you do what you do,’” Joyce adds.

In February, Batz will bring out a new book, also called What Really Works. Coauthored by Tim Schmidt, a divisional vice president at Thrivent Financial for Lutherans, Batz’s book discusses the “seven Fs”—faith, family, finances, fitness, friends, fun, and future—and how leaders can blend them in their lives, both in the professional and personal realms.

The book is part of Batz’s strategy to create a publishing label akin to the Chicken Soup for the Soul series, but for leadership development. Each year, What Really Works will conduct social research through Web-based surveys, then follow up with at least 50 interviews with leaders. Each title will interlace executive coaching advice with stories of people who’ve successfully blended the seven Fs. The book for 2012 will delve into the “eighth F,” fear, and the role it plays in work and life.

The books and the firm’s consulting team will work hand in hand to offer strategies for blending personal and professional goals, such as increasing one’s company’s philanthropic endeavors. Batz also stresses making the workplace more fun and a place to cultivate good friends. That’s important, he says, because employee satisfaction is nearly 50 percent higher when people have close friends at work; this, in turn, leads to stronger employee engagement, higher productivity, and more innovation.

“When we’re getting everybody to want to work together toward the same purpose, that’s the best—that’s what binds all of this together,” he says. “You have to put the personal and the professional on the table for you to get that to happen.” In other words, who a leader is at work and who he or she is in private can no longer be separated if that leader and the organization are to be successful.

Batz adds that in his book, “we’re not quoting dead guys. You’ll hear from people who are current and very accessible, who are living lives like we do. It’s a great fit for the inspirational category, especially where the book is 150 pages or less and you can read it on one airplane ride or in one beach chair sitting.”