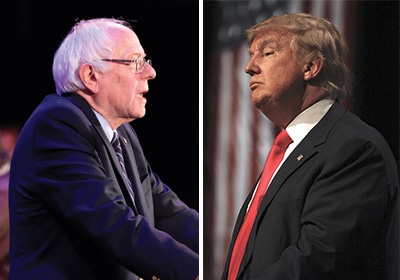 Lessons From The Campaign Trail

Trump and Sanders offer lessons for marketers beyond the political realm.
April 29, 2016

At the outset, let me admit I was wrong.

Many months ago I devoted this column to the candidacy of one Donald Trump and mentioned how he didn’t have a chance of getting the Republican nomination. Along with many others, I underestimated his appeal and the mindset of primary and caucus-going voters. Trump looks like the presumptive nominee, after racking up impressive wins across the country. The once-impossible thought is becoming a reality, but it’s not only Trump who has pulled off an impressive campaign and provided marketing lessons for all of us.

Even though it looks like Hillary Clinton will be the Democratic nominee after the party convention in July, Sen. Bernie Sanders is giving Clinton a run for her money, including winning here in Minnesota and making the race closer than anybody believed it would be. Both Sanders and Trump have provided us with important pages for our marketing playbooks.

Page 1 Stand for something

Whether you like him or not, Sanders definitely stands for something. He has been consistent in bashing Wall Street and sticking up for the middle class, while portraying his opponent as a friend of Wall Street and the 1 percent. Sanders is calling for a political revolution and has tapped the sentiment of those fed up with the constant fighting and stalemates in Washington.

Trump came out strong with an uncompromising approach—to immigration, to the Chinese on trade and to fighting terrorism. By taking a strong and vocal stance on a number of issues, both Sanders’ and Trump’s brands stood clearly for something instead of trying to be all things to all people.

Before the primary and caucus season started, everybody presumed Jeb Bush would wind up as the Republican nominee once he declared his candidacy. He had the backing of the GOP establishment and an impressive war chest. Clinton was seen as a walkaway favorite. Neither anticipated the rise of Trump or Sanders and the challenges they would pose. Bush left the race after pathetic showings in early primaries, and Clinton’s in a fight where none was foreseen. When you presume you know what the future in the marketplace will hold, you’re setting yourself up for surprises.

The public is fed up with the establishment to the point of outright anger. Trump’s a total outsider and leverages that to his advantage. There’s nothing about his brand that says status quo, and that plays extremely well with the millions of voters who feel disenfranchised. Just ask Jeb Bush.

While Sanders is a politician, he’s been effective at distancing himself from Washington. Labeling himself a democratic socialist, he has positioned himself as a hybrid who convincingly differentiates his brand from an opponent who is viewed as a consummate Washington insider and friend of Wall Street. Brands that fail to truly understand the market are bound to make mistakes, as well as waste resources.

You would be hard-pressed to find a candidate more effective at leveraging earned media than Trump is. While other candidates have tapped their war chests primarily for television advertising, Trump—by virtue of his outspoken and often outrageous statements—has gotten more news media coverage than any other candidate. He has also leveraged social media, specifically Twitter, better than anyone else on the campaign trail, typos and all. Sanders has not been as effective in getting earned media, but the fact that his campaign surprisingly emerged as a real challenge to Clinton brought him more coverage than he would have otherwise earned. Brands that look at new and different ways to reach their market are bound to differentiate themselves.

Even though I hate the buzzword “authentic,” it applies here. Both Sanders and Trump are about as unscripted as you can be. Whether it’s Sanders ranting with arms flailing or Trump insulting myriad people, there’s nothing phony about their brands, and that resonates. In an age where people expect openness and honesty, brands seen as embodying those values succeed more than those that don’t.

Marketers would be wise to take a page from the Trump and Sanders playbooks—like them or not—because they’re both effective marketers who have succeeded by challenging convention.