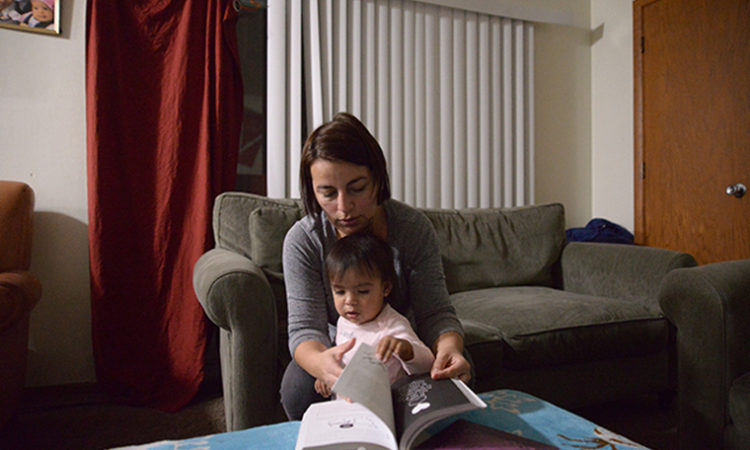 Del Campo Chacon and other tenants of the five Frenz properties in South Minneapolis await a housing court decision that will determine if they have to pack up and move out. ( Photo by Taryn Phaneuf)

Del Campo Chacon’s eviction fight — part of a larger struggle among a group of families living in five Frenz properties on the same block — is a new chapter in a long story, one that includes allegations of fraud, unsanitary conditions, rent strikes and city intervention.
By Taryn Phaneuf
November 29, 2018

Vanessa Del Campo Chacon lives in a one-bedroom apartment with her husband and 15-month-old daughter, Regina, who just learned to walk. On a recent day, Regina ambles through the living room and down the hallway, peeking in on the three neighbor boys her mother watches during the day.

Like so many parents, Del Campo Chacon remembers feeling expectant as Regina took her first steps. Now she’s not so sure about it, she says with a laugh. Between Regina’s curiosity and mobility, she’s into everything.

When Del Campo Chacon and her husband, Oscar Romero Hernandez, came to Minnesota from Mexico four years ago, they chose their apartment because of its location. It’s a couple blocks off Lake Street on 22nd Avenue South, with quick access to buses and the light rail Blue Line. The area, home to many Latino immigrants, felt familiar.

So they’ve made this their home. Their walls are filled with family photos and memorabilia. Regina’s cardboard picture books share shelves with her mother’s favorites, while trophies her husband won playing soccer sit atop the bookcase.

Del Campo Chacon’s husband used to play soccer every week. But he quit going a few months ago, when the family and their neighbors received eviction notices from their landlord, Stephen Frenz. Instead of leaving, as many did, they decided to stay. They also agreed to fight the eviction order with the help of attorneys and Inquilinxs Unidxs Por Justicia (Renters United for Justice), a tenant rights group.

Their housing situation has been a struggle since before Regina was born. And now, as their court hearings and a possible trial loom, the fight weighs on them. Her husband works long hours, trying to scrape together the money they may need to find a new apartment, but she doesn’t know how, or where, they’ll find one.

She’s at home during the day with her daughter and the extra children, so it has fallen on her to navigate the situation – from attending court to looking for a new place. She used to go to the library like clockwork, she said, but she doesn’t read as much anymore. “It’s really stressful,” she said. “I hope we don’t have to take this all the way to trial. It makes me want to cry just thinking about it.”

How they got here

Del Campo Chacon’s eviction fight — part of a larger struggle among a group of families living in five Frenz properties on the same block — is a new chapter in a long story, one that includes allegations of fraud, unsanitary conditions, rent strikes, and city intervention.

Frenz lost his rental license last year when the City of Minneapolis learned he’d lied about the ownership of his properties. During a spat in housing court over the conditions at some of his apartments, attorneys realized Spiros Zorbalas, a landlord whose rental license was revoked in 2011, maintained ownership in several properties Frenz had supposedly purchased in 2012. In October, a class action lawsuit filed against Frenz and Zorbalas resulted in $18.5 million judgment against the two, money that was to be paid to about 5,400 tenants.

Del Campo Chacon’s story is a familiar one for those who have lived in Frenz’s apartments, with tales of pest infestations, broken appliances, malfunctioning heat or air conditioning units, and myriad other damage. 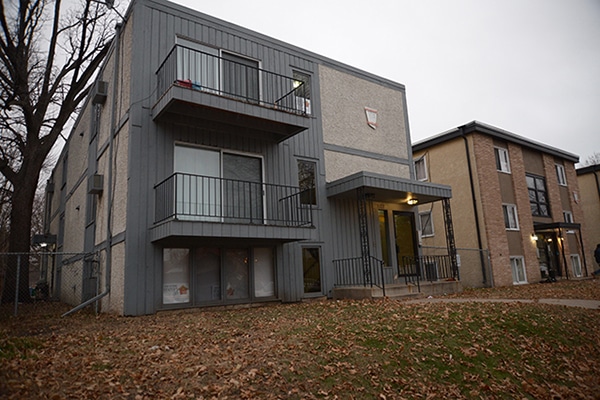 Del Campo Chacon lives in one of five Frenz properties on the same block. (Photo by Taryn Phaneuf/MinnPost)

Del Campo Chacon’s family had food spoil numerous times when their fridge stopped working. When a teacher pointed out that her daughter never crawled, Del Campo Chacon realized it was because she felt anxious about leaving her on the floor, given her worries about mice and insects. Instead, she kept Regina in chairs or in her arms.

She pulls out her phone and swipes past dozens of photos of her baby girl to evidence of the issues they’ve lived through, including cockroaches in the kitchen, near drying bottles and dishes and even in her daughter’s crib. “We consider the cockroaches neighbors by now because we can’t get rid of them,” she said.

Then, in January, Roberto de la Riva from Inquilinxs Unidxs Por Justicia knocked on their door. Del Campo Chacon and her husband soon joined their neighbors organizing to force improvements in their building. They also began putting their rent in escrow – a right renters have if their landlord fails to make repairs.

Around that time, the city appointed an administrator to oversee the properties while they underwent fixes to pass city inspections. Those repairs were completed over the summer, and control of the properties reverted to Frenz.

The eviction notices came soon after. Tenants were told they had until the end of September to vacate. Many did, fearing an eviction on their record would prevent them from renting elsewhere. Those who stayed were summoned to housing court in November.

This month, Minneapolis Mayor Jacob Frey turned the attention of his affordable housing agenda toward the 4th District Housing Court, where tenant and landlord disputes play out every day. In launching More Representation Minneapolis, Frey called on private law firms to increase the number of hours their attorneys spend helping tenants and promised to budget $150,000 for a pilot project to fund legal services for low-income renters summoned to court. “We’re moving toward creating a more level playing field in housing court for Minneapolis renters,” Frey said in a statement on Facebook.

For 18 years, the Volunteer Lawyers Network and Mid-Minnesota Legal Aid, funded by Hennepin and Ramsey counties, have offered limited representation to tenants in the form of advice and assistance outside the courtroom. Staff attorneys with legal aid also represent tenants in court and negotiate with landlords. On the same day Del Campo Chacon went in for her hearing, seven attorneys were working to represent as many people as possible, said Luke Grundman, managing attorney in Minneapolis’ Legal Aid office. He represents Del Campo Chacon and a few of her neighbors in housing court. 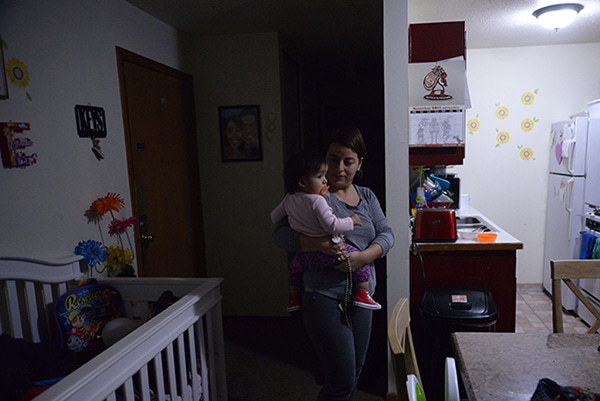 Vanessa Del Campo Chacon's housing situation has been a struggle since before her daughter, Regina, was born. (Photo by Taryn Phaneuf/MinnPost)

“We believe housing is a right and … if someone is about to lose that right, they also have the right to counsel,” said Muria Kruger, program manager with Volunteer Lawyers Network.

Roughly 3,000 tenants face eviction each year in Minneapolis, a city with a “razor thin” vacancy rate, Grundman said. “Low-income housing availability is at historic lows. … There’s no place for these families to go,” he said. “If you watch this thing happen, crisis is the only word that makes any sense.”

Del Campo Chacon and other tenants of the five Frenz properties in South Minneapolis await a housing court decision that will determine if they have to pack up and move out. A hearing scheduled for Nov. 16 – a week before Thanksgiving – was rescheduled for Nov. 28.

Grundman said despite the unprecedented scope of the Frenz saga, the hearing comes down to allegations that tenants stayed past an eviction notice. He will argue the evictions were issued in retaliation for renters asserting their rights.

He hopes the judge will rule in the tenants’ favor rather than calling for a trial, though he thinks it’s unlikely. “The law has a pretty good protection for tenants facing retaliation but it still requires us to prove it,” Grundman said. “Our day-to-day goal is that people don’t get kicked out into the cold.”d