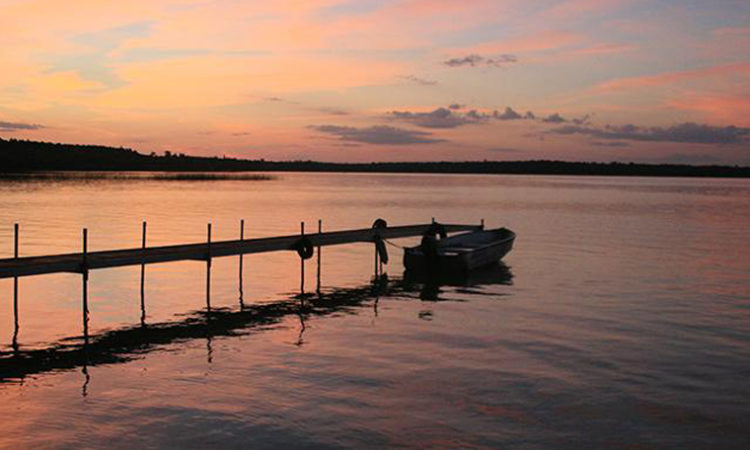 The number of resorts in Minnesota has dropped by nearly half since 1985.
By Greta Kaul
March 27, 2018

Fishing and swimming in the sun, napping by the lake, listening to loon calls, picking out constellations in the dark northern sky, and trying to sleep on a sunburned back.

Summers at the lake are a Minnesota institution. For many families, these summer-at-the-lake experiences happen at resorts, which, generally speaking, are collections of lakeshore cabins, often run by a family living on-site, for rent.

For many Minnesota families who return to the same resorts year after year and even across generations, these northern institutions are an essential part of what it means to live a good life in the North Star State.

But the number of families for whom resorts are a summer tradition may be dropping: The number of resorts operating in Minnesota has dropped nearly in half in the last 30 years. The tourism industry attributes this to economic pressures that range from guests’ changing expectations to the declining value of their businesses relative to the land they sit on.

A way of life

Resorts have been a way of life for many Minnesotans for more than a century, said Ren Holland, the author of “The Early Resorts in Minnesota: Tourism in the Land of 10,000 Lakes,” who grew up on a resort on Little Mantrap Lake, not far from Itasca State Park.

For owners of resorts, the economics surrounding these seasonal businesses has seen its ups and downs in that timeframe.

They started as small fishing camps and summer hotels with rustic cabins: City dwellers and residents of warmer southern climates traveled all the way to northern Minnesota to get away for fun, or for their health.

Even some of the architecture we’ve come to associate with cabins, like the breezy, screened sleeping porches, originated to promote health: Fresh air and pine trees were thought to be an antidote to the symptoms of diseases like tuberculosis.

As the automobile became more widely available and roads were built into the north woods, the number of resorts in northern Minnesota grew. But before long, the Great Depression hit, forcing some resorts to close as the flow of guests who could afford to take vacations slowed.

With the onset of World War II, families were split up as men went off to war, again reducing the number of customers for resorts.

Holland’s family closed the resort for a time during the war, and moved to the Twin Cities, where his dad found work in construction. Things picked up again at the resort after the war.

It was the postwar era that was the golden age for summer resorts in Minnesota, with a burgeoning middle class that could afford a week or two up at the lake.

Soon, the number of resorts boomed, peaking in the 1950s and early 1960s, Holland said. 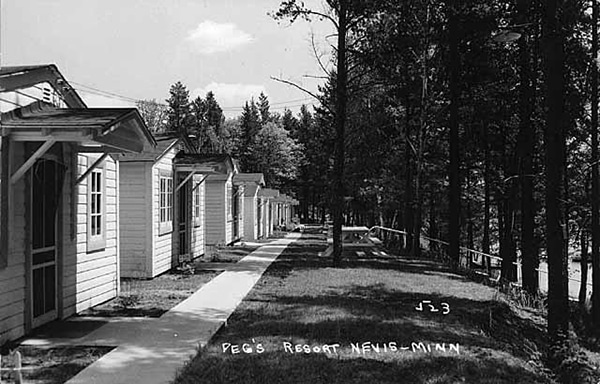 Peg's Resort, near Nevis, around 1950. (Courtesy of the Minnesota Historical Society)

Holland’s family sold the resort in 1950. It continued to host guests for a while under new ownership, but now, a house stands along the lake where the cabins once were.

“I’m not sure, but it’s probably close to maybe between a half million and a million dollars,” he said of the home.

That’s not an uncommon sequence of events.

The number of resorts in Minnesota has dropped by nearly half since 1985: from about 1,400 then to 760 in 2015, according to the most recent statistics from the Minnesota Department of Revenue, which tracks resorts for tax purposes.

Nick Leonard, the director of communications and external relations for Otter Tail County, said a big part of that is lakeshore property values in Minnesota have risen, making it more practical for many resort owners looking to retire to sell to a developer than to find somebody to keep the business going.

The number of resorts operating in Minnesota today is nearly half the number operating in the mid-1980s. Data for some years were not available from the state.


“The land has outpaced the value of businesses, so if you’re the resort owner — it’s never been an industry that people get wealthy off of … they put their whole heart and soul and all of their energy into running this business. They’re able to live there and have a modest living (and) their retirement, for many of them, has been to be able to turn around and sell this resort,” Leonard said.

“If I can sell my resort for $3 million to a developer … or $1.5 million to a young couple that wants to start in the resort business, it’s a no-brainer what option you’re going to take,” he said.

In other cases, resort owners are turning their resorts into homeowners associations — selling off a cabin here and a cabin there.

“Now it’s 10 families that own those cabins and use them like anyone else would use a private cabin. That’s a reasonable model if that’s what people have to do,” he said.

But it’s not as good for tourism in parts of the state that depend on a steady flow of out-of-towners over the summer months.

“Instead of those 150 families coming to our area, now we’ve got 10,” he said. People who own cabins tend to spend less, bringing their own food and fun, than people coming up on vacation, something bar and bait shop owners have noticed in some communities, Leonard said.

Attracting those guests can present challenges for resorts, too: Guests increasingly want nicer cabins, and amenities like flat-screen TVs and wi-fi, which makes an already capital-intensive business more difficult to maintain.

Leonard and his family, who own the East Silent Lake Resort near Perham, have adopted a model Leonard said is more common at Duluth and Brainerd-area properties, in order to raise capital to invest in the resort and keep a steady flow of guests coming.

The family decided a few years ago to build new cabins, and make them condos. Families can buy a 13-week share of these new units. When they're not using it, the cabin goes back into the rental pool. When the cabin is rented, the condo share owner gets a cut.

“No resort owner could afford to invest in a new cabin every year, but when you incorporate other owners,” it's much easier, Leonard said.

Innovative business models may be needed if resorts are to continue thriving in Minnesota.

The survey sample size was small: 39 of 139 resort owners who were sent the survey answered back, and about 30 resort owners also attended a retreat with group discussions about the resort industry that followed up the survey.

“We’re going to continue to see a steady decline of resorts,” Leonard said. The goal of the study and the recommendations its researchers provided to local governments — such as regulating short-term vacation rentals that compete for visitors, helping resorters get capital to develop and redevelop — was to figure out ways to slow those losses.

Jim Wherley, who bought Sunset Bay resort in Richville with his wife, Kristin, in 2012, and who serves as the director of the office manager for the Community of Minnesota Resorts, said running a resort is hard work, but his commute in the morning consists of walking down the hill.

“I’ve got the best office in the world. I’m right on the lake, and it’s rewarding to have people come and spend their vacation with us. It’s something we take a lot of pride in — I think every resorter does,” he said.

One of the best parts, he said, is seeing the generations of families spend time together — great-grandparents, grandparents, parents, kids.

“It’s something that’s been done for over a hundred years in Minnesota, hopefully the pressures don’t make it where it doesn’t exist anymore,” he said.