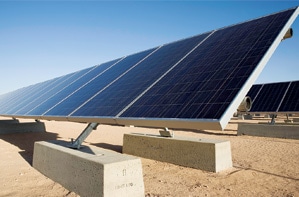 Westwood Renewables launches designs for a solar farm located at a landfill between Oronoco and Rochester.
July 11, 2010

Landfill redevelopment is usually limited to parks and open space—things that won’t breach the surface, explains Cathy Moeger of the Minnesota Pollution Control Agency. Digging for construction would cause the release of the greenhouse gas methane, and the migration of pollutants into groundwater. That’s why a pilot project at a closed landfill between Oronoco and Rochester is so novel, one of just a handful of similar projects in the country.

Eden Prairie− based Westwood Renewables is designing a solar farm at the landfill for the MPCA. Most solar installations require driving posts into the ground. This one will feature concrete ballasts that sit on the surface and secure the base of each solar photovoltaic panel.

The MPCA’s 20-acre pilot project should be operating by 2011 and will produce up to 2 megawatts (power for roughly 300 homes) annually. To date, it’s the largest solar-energy facility planned in the state.