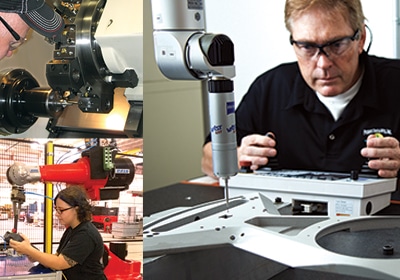 Manufacturers north of the Twin Cities are seeking to build a new-generation workforce.
September 01, 2015

Pequot Tool & Manufacturing makes custom parts for businesses in the aerospace, medical equipment and firearms sectors. It meets customer needs from a base in Jenkins, Minn., a town of about 450 that’s 20 miles north of Brainerd on Highway 371.

Despite its rural location in north-central Minnesota, the company has built a client base with big-name companies, including Lockheed Martin, Boeing, GE Medical, electronics manufacturer Nortech Systems and Magnum Research. These are demanding customers with continually evolving industries. And that means that Pequot Tool, which employs 150, needs to keep its staff up to date on manufacturing processes.

“Every time we bring in a piece of new equipment, we need to integrate that,” says Tim Walker, employee development coordinator at Pequot Tool. As just about any manufacturer in Minnesota will tell you, it’s hard to find enough good hires to fully staff operations. And as Walker notes, “that’s especially acute when you get into a rural economy.”

The skills Walker and many other manufacturing executives are looking for fall primarily in the category of “advanced manufacturing.” Generally speaking, this refers to the incorporation of digital technology into manufacturing processes. It’s not a radically new notion—equipment such as computer numerical control (CNC) cutting machines have been around for some time. But new technologies, such as robotics, and newer types of materials are requiring new skills. As manufacturing recovers from the recession, firms like Pequot Tool need employees with those skills.

But they need more than warm bodies who can only perform the same assembly tasks over and over. They require employees who can handle the robotics that are taking over those repetitive tasks. They need people who can engineer and operate computer-driven cutting machines and other digitally interfacing equipment. They need people who can read and manipulate three-dimensional blueprints to verify the quality of the complex components they produce. Soon, they may need employees who can manage emerging 3-D printing technologies.

To train its employees in advanced manufacturing techniques, Pequot Tool is benefiting from an advanced-manufacturing education grant through the U.S. Department of Labor. The training is being administered via the Advanced Manufacturing Education Alliance (AME), a regional consortium of technical colleges, employers, government entities and other partners whose goal is to boost manufacturing education and employment, primarily in central Minnesota. For smaller manufacturers looking to keep up with big changes and demands, it’s a boost they can put to work.

AME was founded in 2012 to support training in advanced manufacturing skills that are needed by small and midsize manufacturers. The alliance is focusing its training programs on automation and robotics, plastics technology and prototyping, as well as more traditional trades such as welding and machining, says Stefanie Schroeder, dean of workforce and economic development at Pine Technical and Community College in Pine City, acting director of strategic grant initiatives at Central Lakes College in Brainerd, and an AME staff member. Though they focus on manufacturing processes and production, AME’s courses also include sessions on soft skills such as leadership and career management.

In addition, more than 100 regional manufacturers are “partner employers” of the consortium, as well as several workforce and government agencies.

More information is available at amealliance.org.

In 2012, AME received a $13.1 million grant from the Department of Labor to help its partner schools add to their program inventories and modernize their equipment so that their labs are up to date with what the manufacturing industry is using, White says. This new equipment includes robots and robotic training equipment, CNC turning centers and plastics presses, as well as scanning equipment and software used in rapid prototyping and 3-D printers.

AME’s grant includes money for training. It supports “media telepresence systems,” which provide a virtual classroom that allows students from numerous manufacturing facilities (primarily in central Minnesota) to take the same course simultaneously without leaving the workplace. Since the spring of 2014, more than 550 students have been trained through the AME project.

Pequot Tool’s Walker is one of those instructors through Central Lakes College, and what he teaches offers a sense of the technical aspects of advanced manufacturing. In 1999, Walker earned certification from the American Society of Mechanical Engineers as a senior-level professional of geometric dimensioning and tolerancing (GD&T), which Walker describes as “advanced blueprint reading.” As manufacturing parts and processes become more complex, GD&T skills are becoming more important.

Walker is leading the development of an internal advanced-machine training project that his company is piloting this year. Specific competencies required for each job are identified as are training resources to acquire them. “We’re attempting to define every objective skill an employee needs to have to do their job effectively,” he says. Walker is driving the creation of a large “matrix” of skills and competencies to help guide employees to become fully competent in a particular grade level, to prepare for advancement to the next grade level.

Walker sees all of these efforts as necessary for keeping Pequot Tool on the cutting edge. Being able to validate that the parts do conform to the customer’s requirements is key, he says, since complex parts necessitate a higher level of quality control. “That requires that our employees, while they are primarily known as machinists, must also be knowledgeable in inspection techniques and blueprint reading,” he says.

Another factor driving Pequot Tool’s training is the use of new, advanced materials. An example is Inconel, a high-tech material that is highly resistant to corrosion, used in aerospace applications. “Inconel is a very difficult material to machine,” Walker notes. “So by having that skill set here, we gain a foot in the door to some very high-end companies that are seeking supplier bases that are capable of working with those advanced materials.”

Hoping to help manufacturers like Pequot Tool have access to a pool of technically savvy talent, 360 Manufacturing is also seeking to boost Minnesota’s manufacturing talent base by attracting young Minnesotans to the industry. It sponsors robotics curricula for colleges, as well as robot-building competitions for students. It coordinates an annual tour.

“Last year, we had 85 businesses across the state participate, and we had 1,500 middle and high school students attend the tour,” White says. More than 4,000 adults attended. The tour brings people into a manufacturing facility and lets them “see for themselves” what goes on inside, White says. With many manufacturers concerned about their aging workforces, it’s crucial to show younger people that manufacturing can provide a rewarding career—and that it’s a field that’s generating a steady stream of high-technology challenges.

How well is the advanced manufacturing program proceeding? 360 Manufacturing’s White acknowledges that it’s challenging to come up with a sharply defined picture, because Minnesota doesn’t have a system for tracking students from high school into college. Based on data on schools where her organization has made capital investments and where its curriculum has been implemented, 360 thinks it has reached close to 6,000 college students. There has been a 72 percent enrollment growth at partner colleges since 2006, she says, translating into 2,000 more technicians for the industry.

AME’s Schroeder says that the alliance is offering short-term, as well as eight- and 16-credit courses at more than 100 businesses “with the same rigor as you’d get in a face-to-face course in any of our institutions.”

And while White says that 360 Manufacturing doesn’t have job placement data, “because of what we’re doing, there’s more talent available for the industry.” Even with evidence that some manufacturers are slowing down a bit after a post-recession burst of activity, those companies still need a higher skill set, White says.

Companies such as Pequot Tool & Manufacturing know that need very well. It’s something more manufacturers throughout the state will need to tap.