Is the KQRS era ending or is a new ratings technology blind to its hard-working, middle-class audience?
March 11, 2012 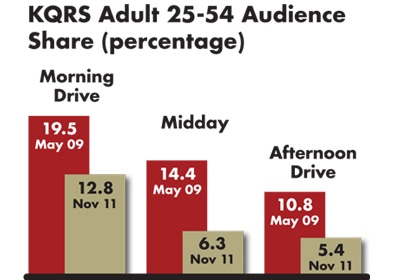 If you’ve marveled at the staying power of KQRS, the long-dominant classic rock station that plays mostly the same music it was playing in 1992 and 2002, you will probably marvel at its tumble in the ratings of late.

The November ratings book saw the Cumulus Media (KQ, Love 105, 93X) station drop out of the number one position among men 25-54 for the first time in 25 years, while its share of the audience aged 6+ (a broad metric, but not used by advertisers) has dropped 41 percent in two years. Cumulus management chose not to speak for the record, but privately are rejecting the data, noting it does not track with the station’s internal research and is the result of flawed ratings methodology.

Prior to 2009, Arbitron ratings were reported by individuals who received a monthly listening diary in the mail and chose to fill it out and return it. Diaries were most often returned by adults with stable addresses and lifestyles. Since mid-’09, Arbitron has gathered its data via “personal people meters,” (PPM) devices worn like a beeper for as long as 18 months. The meters definitively register everything listened to, even snippets of songs playing in the background of a sub shop.

“It’s recall versus reality,” notes Mick Anselmo, who leads CBS Radio’s station group (WCCO, JACK FM, and BUZ’N country). The implication being that ubiquitous stations such as WCCO and KQRS were listed more than listened-to in the diary era. KQ’s critique is that the meters are a pain to wear, busy professionals quickly tire of managing them, and they violate service employees uniform rules, leaving PPMs to less desirable audiences who particularly value Arbitron’s small stipend. Cumulus says a third of local PPM wearers identify as unemployed or earn under $20K a year.

Compass Point Media’s Carol Grothem says “Classic rock as a format is fading a bit nationally,” and notes KQRS is “down consistently” over the last two years, but she does not see KQ as fundamentally weakened. In particular she references Tom Barnard’s dominance among prime demographic audiences in morning drive. But even Barnard’s top-rated show is down 60,000 listeners over the last two years, if the meters can be trusted.