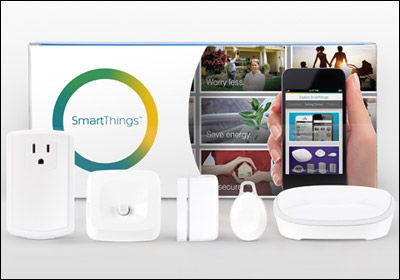 SmartThings—which allows users to control household and other devices using a smartphone—has now raised $15.5 million in venture capital, in addition to the $1.2 million that it “crowdfunded.”
November 22, 2013

A technology start-up that knocked its 2012 crowdfunding campaign out of the park just raised an additional $12.5 million, this time in venture capital funding.

SmartThings—which is technically headquartered in Washington, D.C., but was founded by a Twin Cities native and employs the bulk of its engineers in Minneapolis—raised the latest funds in a Series A round led by Silicon Valley venture firms Greylock Partners and Highland Capital Partners.

The concept behind SmartThings was sparked when Alex Hawkinson discovered $80,000 worth of damage caused by a leaky pipe in his Colorado vacation home. He was determined to find a solution that would have notified him that such an issue was occurring, or that would’ve let him shut the water off remotely.

SmartThings allows users to monitor or control a variety of devices remotely. For example, users can control home security or lighting systems using a mobile app, or be notified when a motion sensor detects unexpected motion while they're away from home. The idea is to make everyday devices “connected.”

The start-up raised more than $1.2 million through crowdfunding website Kickstarter, in a campaign that ran between August and September of 2012. Local technology news outlet TechDotMN pointed out that the campaign ranked as the second “most-funded” Kickstarter technology campaign at the time.

Following that campaign, SmartThings turned to more traditional financing, raising roughly $3 million in seed funding last December. Including the latest Series A round, the company has now raised $15.5 million in venture capital, in addition to the Kickstarter funds.

SmartThings, however, extends beyond the company's original products and is at the forefront of the “Internet of Things,” according to Hawkinson, the company’s CEO and co-founder. It involves a platform that allows other device makers to make their products “connected” using SmartThings’ technology. Too, third-party developers can expand on the technology by building their own apps.

SmartThings’ starter kits are currently available through the company’s website and at Amazon.com, but the company plans to expand its distribution channels as a result of the latest capital infusion, Hawkinson said.

SmartThings has 40 employees, the majority of whom work in Minneapolis.