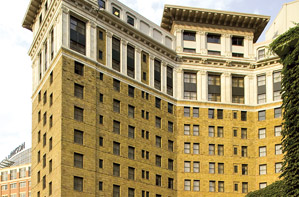 It Happened at the St. Paul

Lucius Ordway, an early investor who helped 3M get off the ground, pledged a site on St. Paul’s Rice Park in 1908 for the construction of a hotel—if the St. Paul Business League would raise $1 million dollars to make it a top-notch facility worthy to represent the city.

They did, and 100 years ago, on April 18, 1910, the St. Paul Hotel had its grand opening, the Palm Room “heavy with the odor of thousands of American Beauty roses” for the occasion, the St. Paul Pioneer Press reported.

After such splendor, things got decidedly grittier. In the Prohibition era, bellhops with envelopes of cash took in deliveries of $25-a-gallon liquor, and gangster Leon Gleckman, “the Al Capone of St. Paul,” kept a suite at the hotel as his headquarters. (On the hunt, T-man Mike Malone, a federal agent who had infiltrated Capone’s syndicate, took a room there, too.)

By 1937, Prohibition was over, and a 34-year-old MacPhail School of Music graduate named Lawrence Welk was playing his “champagne music” at the St. Paul Hotel on Saturday nights. Wunnerful, wunnerful!