Is There Proof Food Trucks Are Hurting Skyway Restaurants? 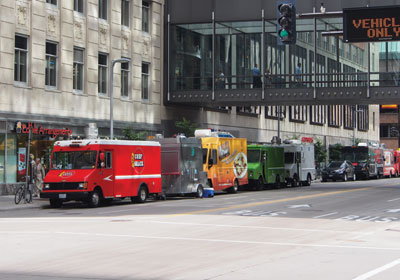 You’ve heard that downtown Minneapolis skyway restaurants are saying the surge in food trucks—lined up bumper-to-bumper on two blocks of Marquette Avenue—is hurting business. The truck community replied “May the better food win.” We asked to see the numbers.

When you have six trucks lined up below your space on a nice summer day, there’s nothing a skyway business can do to lure people in, says Linda Tam, who co-owns Asian Max, located in the Canadian Pacific Plaza building. Tam said sales at her restaurant dropped 20 percent last year during food-truck season (April through October).

Ah Sa Wan restaurant on Eighth Street, meanwhile, saw a 15 to 20 percent drop, says owner Peter Au. A Baker Center pizzeria says its sales were down by 30 to 40 percent, but its owners asked we not identify it to avoid further stigma.

Doug Sams, owner of D.Brians Deli, which has several skyway locations, says up to 18 trucks vie for a spot between Sixth and Eighth streets on Marquette because that puts them close to workers in two of the city’s largest buildings, the IDS Tower and the Wells Fargo Center. Sams and his allies want trucks dispersed throughout the downtown area, with two or three per block at the most.

The skyway businesses have the support of an influential group, the Building Owners and Managers Association (BOMA) of Greater Minneapolis. Executive Director Kevin Lewis says building owners are exposed, as restaurant tenants are already asking for rent concessions.

“We’ve met with the mayor’s office and representatives in the city, and they would like to see if we could find common ground,” he says. Lewis believes it would be easier to reach a compromise than obtain a new food truck ordinance.

The groups have been in talks but hadn't resolved the issue as of press time.

For now, though, as another food truck season approaches, the vehicles will continue to get what Sams terms “a free ride . . . . See those people wearing fluorescent vests and cleaning up the mess on the sidewalks that food trucks leave behind?” Sams asks. “We’re paying for them.”