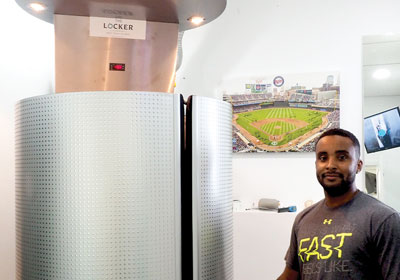 Is Cryotherapy A Panacea?

Branden Johnson envisions a future with a cryotherapy clinic in every community, offering short-burst exposure to temperatures of -265 F to treat and restore the bodies of athletically inclined Americans. His Lake Calhoun area business, The Locker, is preparing to expand to Woodbury and Wayzata, and one of his ex-customers has opened a similar freeze shop, Cryostrong, in Savage.

Yes, extreme cold may have finally caught fire. Professional athletes swear by it, apparently. Twins pitcher Ervin Santana “comes down almost every day,” says Johnson. He name-drops Joe Mauer and a number of Vikings players among his customers in the last half-decade.

Cryotherapy boasts a bounty of reputed upsides: from fuller hair growth and depression mitigation to increased libido and quicker surgical recovery. Johnson says he has clients that do it for PTSD and others who use it as a treatment for rheumatoid arthritis. The therapy is endorsed by Dr. James Andrews, orthopedic surgeon to star athletes.

Cryo chambers cost from $50,000 to $60,000, so Johnson needs to drive a lot of $35 quick-freezes through them. Annual memberships, which start at $350 for unlimited visits per month, help drive a steady flow of 60 or so customers a day. Or maybe it’s the promise to burn an extra 500 to 800 calories from the ensuing metabolism boost.

Customers enter the cryo-chambers at The Locker in a pair of dry socks, cotton gloves and underwear. (All but the skivvies are provided.) The frosty air rubs the skin like sandpaper. The limbs numb within moments. Upon escape from the cold, Johnson asserts the “blood vessels expand three or four times their size,” and blood flow returns through the body.

The effect is an immediate euphoria, and the purported benefits emanate from this aftereffect. Or as Johnson tells customers, “when you step in, your day can’t get any worse and it can’t feel any better when you step out. That endorphin release alone is worth the price of admission.”

Now we all feel better after we stop hitting ourselves on the head with a hammer, but it’s not necessarily worth the trouble. Still, can the likes of adherents LeBron James, Cristiano Ronaldo, Joe Mauer and the Minnesota Timberwolves, all be wrong? —Sam Schaust