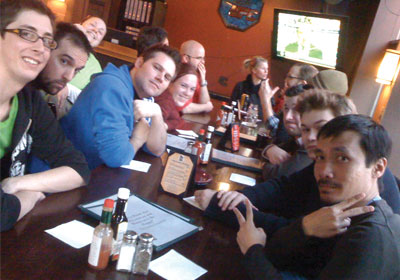 “When you’re in school and broke, you have only your passion and drive,” says Quan Hoang, chief creative officer and intern wrangler for Pixel Farm Digital in Minneapolis. “What comes from that momentum and energy is unmistakable and fills an agency. But we needed more than just one or two interns. We needed an invasion.”

Hoang, former head of interactive services for Minneapolis ad agency Periscope, joined Pixel Farm Digital last fall. The firm, an offshoot of the post-production house Pixel Farm, was trying to broaden its focus from e-learning markets to include more commercial advertising work, but the staff lacked a certain creative oomph.

There was “no creative culture” when he came on last November, Hoang says. He knew where to get an infusion of it. He had taught at schools including Brainco—the Minneapolis School of Advertising, Design, and Interactive studies, where he was exposed to large doses of unadulterated passion and drive.

So he tweeted in January: Pixel Farm Digital would recruit a “farm team” of talent, six interns who’d compete for one coveted, full-time job with the firm. They’d produce actual ad campaigns for actual clients. And they’d keep up a multimedia blog about their experiences (see it at hydra-9.com).

Hoang got about 70 applicants, some who had full-time job offers elsewhere. Six interns became nine when three finalists wouldn’t take no for an answer and agreed to work unpaid.

“This is the golden ticket,” says intern–art director Kristen Mortenson in April, a few weeks before the internships end. “The clamor for one of these spots was something to behold.”

She and the others sit together in an alley of space in the agency’s Warehouse District offices. Working elbow to elbow, they bond as a team even as each one hopes to stand out.

“We intentionally put them under the kind of pressure where they feel the need to prove themselves every day,” Hoang says. Crafting pitches or campaigns under impossible deadlines, they work around the clock if necessary. If an intern generates the best ad concept, “they get to drive the whole campaign,” he adds. “When I started 10 years ago, it took me two and a half years to learn what they’re getting down in four months.”

“Obviously, it’s smart for business,” says Kent Bishop, senior art director at Periscope. He completed a TV and Web ad campaign for Red Robin Restaurants with Pixel Farm Digital’s interns. “They took each concept and pushed it further,” Bishop says. “It was always, ‘How can we make this better?’” Red Robin’s sales increased by double digits in the five weeks after the campaign’s launch.

The whole experience was intense, but not cutthroat, says Eva Falk, an interactive designer and one of four interns who got full-time positions with Pixel Farm Digital in late April: “Jobs would come as a result of good work, so we focused on that and tackled projects collectively.”

The interns have worked their alchemy as part of Hoang’s effort to transform the firm’s culture. “I’ve worked at a lot of different places, and you don’t get a group this size without at least three or four people who don’t get along or who start doing [nasty] things to each other,” Scott Hjulberg, a creative director, says of the entire staff. “The dynamic is so different here.”