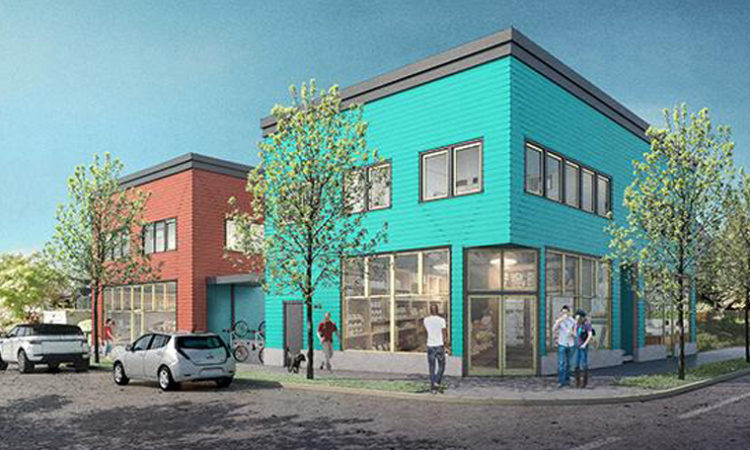 Two-story mixed use buildings designed for the Creston-Kenilworth neighborhood in Portland, Oregon. (Rendering by Guerrilla Development)

Portland developer Kevin Cavenaugh doesn't build a lot of traditional buildings. What he is known for -and what he came to Minneapolis to talk about - is building smaller.
By Peter Callaghan
March 13, 2018

In a room full of people who make a living in the development business, it might have been the most provocative thing Portland architect-developer Kevin Cavenaugh said.

In 25 years, he predicted, people will look at five-over-one apartment buildings the same way we look at strip malls today: not very kindly.

For those not immersed in the particulars of commercial real estate, five-over-one (sometimes called one-plus five) is the ubiquitous form of construction that has been filling lots across the Twin Cities for the last decade. It consists of five stories of wood stick-frame construction over one story of concrete, and is designed to maximize lots with the most-affordable construction method permitted by building codes.

“We look at strip malls, and there was a time when banks lent on them all day long,” Cavenaugh said at a program sponsored by the Urban Land Institute Young Leaders Group last week. “There’s a formula and banks got it because most development is done through the rear-view mirror.”

The formula now is the five-over-one apartment, he said, with several hundred units and a few floor plans to choose from. Those projects are now attracting institutional lenders. And yet, Cavenaugh said, “In 25 years, we’re gonna cringe at those the same way we cringe at strip malls.”

‘Best’ has been ignored

Cavenaugh doesn’t build a lot of five-over-one apartment buildings. Actually he doesn’t build any. What he is known for — and what he came to Minneapolis to talk about — is building smaller. The title of his presentation was “Not-So-Big Real Estate: Growing Cities 3,000 SQFT at a time.”

Cavenaugh’s Guerrilla Development Co. began by developing smaller buildings on cheaper lots that he could finance with smaller chunks of money. One of his first projects was The Ocean, a former Tire Factory outlet that is now home to four micro-restaurants, small spaces that are the next step up for food truck owners.

Another is the Zipper, built onto a triangular lot on a car-oriented arterial he compared to Minneapolis’ Lake Street. It too holds micro-restaurants as well as a punk-rock nail salon called “Finger Bang” and a bar and outdoor space with fire pits.

Several of his projects do not max out the lot lines or the maximum allowed height — something that might not sit well with density advocates who loathe single-story buildings. Cavenaugh said “highest and best use” is “Development 101,” that every lot should be exploited fully.

“In Portland, Oregon — and to some degree what I have seen in the Twin Cities — is that people are building the highest use but the word ‘best’ has kind of been ignored. And that makes for a shitty city,” he said.

With the Zipper, though Cavenaugh’s building was low-rise, other developers have purchased lots nearby and built taller residential buildings. He thinks they were drawn by the activity created by his tenants and by the rents he was able to achieve. “Mixed use doesn’t have to be the same building,” he said. “Mixed use could be a village.” 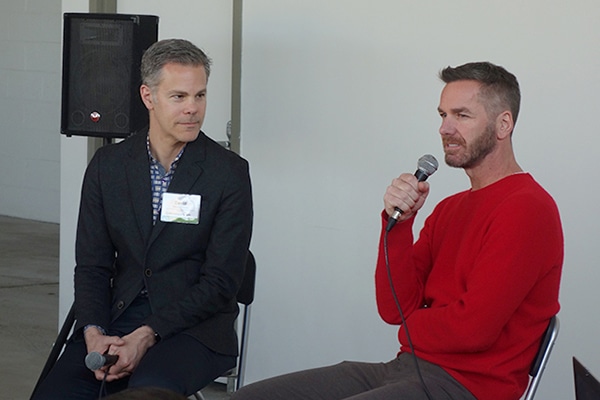 Another project, one he calls The 2/3rds Project (because it’s designed to cover two-thirds of the lot, be open two-thirds of the day and rent for two-thirds what other developments do), is a two-story, traditionally designed building in a neighborhood that hasn’t seen a lot of construction. It has residential, commercial and restaurant spaces.

While he could have built higher, he wanted it to feel natural in the neighborhood. “It’s not dense but it’s packed full of bodies,” he said. “In my opinion, density has nothing to do with … floor area ratio. It’s about how many bodies utilize this building, come to this building.”

Cavenaugh’s underlying message is that builders-architects-developers in the Twin Cities can build similar projects by raising money in small chunks, sometimes including crowd funding, and building smaller. “I spend a lot of time taking rich people to coffee,” he said. “It’s just like dating. You know in five minutes whether there will be another date.”

He said he has been able to make money, provide good returns to financers and collect strong rents because the buildings are interesting, unique and functional.

He also said it is more likely the people who do projects like his will be small operators — even onetime house flippers — rather than big developers doing big projects. That’s because it’s easier for small guys to scale up than for big guys to scale down, he said. “Instead of doing a 2,000 square-foot house, they might do a 4,000 square-foot mixed use building,” he said.

Cavenaugh’s website includes downloadable spreadsheets on all of his projects, showing the financing and the income generated.

Could it be done here?

To allow someone in Minneapolis to do what his company has done in Portland, Cavenaugh said, the city must loosen its zoning codes to give developers more range to build as a matter of legal right rather than needing city permissions, variances and zoning amendments. After hearing the city of Minneapolis’ Director of Economic Policy and Development David Frank’s lengthy, somewhat tongue-in-cheek-but-accurate description of the current land use process, Cavenaugh said that might be the problem. “That alone is why you can’t do what I do. Sorry for wasting your time,” he joked.

Portland, he said, has more-permissive zoning, which gives neighbors less power to block his projects. They can talk to him about details to make a project more palatable, but it is difficult to stand in the way (though, as this City Observatory article points out, not impossible).

Of Minneapolis’ system, he said: “That’s a great way to do formulaic, uninventive projects. Give me some teeth to do some inventive, thoughtful, forward-thinking civic work. Because most of the neat buildings [in Minneapolis] I’ve seen today were not allowed by right.”

Minneapolis is in the midst of a rewrite of its comprehensive plan, a year-long process that will be followed by changes to zoning codes to implement the plan. But the difficulty of that process was illustrated by the negative reaction by some to the leaking of one detail: that the city might allow fourplexes in single-family neighborhoods.

Not everything Cavenaugh builds is small. Perhaps his most noted project is called The Fair-Haired Dumbbell. (Project names are as unusual as the buildings, including “Dr. Jim’s Still Really Nice,” “Atomic Orchard Experiment,” “Jolene’s First Cousin” and “Rig-a-Hut.”) Built on a city owned parcel that once was destined to be a Home Depot, Cavenaugh decided on a commercial building because other developers with pieces of the property were going with residential. The project was one of the first using crowdfunding, something he said was slow going until he was featured in the New York Times.

Portland, he said, is facing more severe displacement problems than the Twin Cities. That has caused Portland to lose its flavor, he said. All of the quirky stores and restaurants featured in the comedy “Portlandia” are going away, he said.

He said his projects haven’t displaced current residents, but acknowledged that any projects in previously underdeveloped parts of a city will lead to some gentrification. The Zipper, built in a used-car lot, didn’t displace anyone and was supported by people living in the neighborhood because it provided fun restaurants and services.

“But usually, five years later, those people who were ecstatic don’t live there anymore because other landlords see the rent I’m getting,” and raise their rents. In response, Cavenaugh said he has done projects with unsubsidized affordable elements usually by finding “impact investors” willing to take a smaller return because of that element. Jolene’s First Cousin, for example, includes some non-subsidized affordable units for tenants who were recently homeless, and a current project is being created to provide lower-rents to social workers.