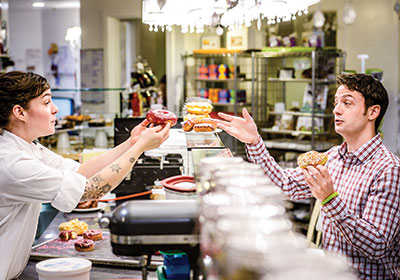 An influx of artisan bakeries is fueled by a new taste for quality over quantity.
June 02, 2014

Twin Citians: You’re in the midst of a bona fide artisan-bakery boom.

“Over the last five years, there’s been an explosion of awesome chef-driven restaurants, and I think the bakeries have come from that,” says Katy Gerdes, pastry chef and co-owner of downtown Minneapolis’ Angel Food Bakery & Coffee Bar.

Angel Food opened in 2012 after crowdfunding over $18,000. Sales climbed 26 percent in its second year, and it went from four to 10 bakers. Whereas it once took five months to deplete a box of 10,000 cupcake liners, “during wedding season, we now go through at least a box a month,” says Gerdes.

Many new bakeries offer gluten-free and other diet-conscious fare, and Twin Citians are practicing “measured indulgence”—opting for quality over quantity, says Stephanie March, dining editor at Mpls.St.Paul magazine and mspmag.com.

She points to 3 Tiers Bakery Bistro in Minneapolis’ Nokomis neighborhood and Groundswell in St. Paul; she thinks high-quality bakeries benefit from shoppers’ willingness to hand-pick items from specialty shops rather than stocking up on a single grocery-store run.

Pastry chefs and bakers also are “getting a lot more recognition in the media, and people are getting more interested [in the profession],” says Alicia Hinze, who left Cupcake to launch the Buttered Tin in St. Paul’s Lowertown last year. After planning for 10 employees in its first year, it grew to 30 in less than nine months.

It doesn’t stop there. Food trucks have lower barriers to entry, and bakers are wheeling in. A Cupcake Social, Cupcake on the Go, and Eli’s Donut Burgers (which serves exactly what its name suggests) are a few early examples.