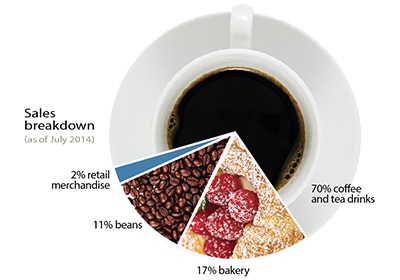 Inside The Retail Coffee Business

South Minneapolis’s Bull Run Coffee Bar started as a roaster in 2002 and opened its first coffee shop on Lyndale Avenue in 2011. After seeing the storefront’s year-over-year growth average 50 to 60 percent since 2012, Bull Run completed an expansion that nearly tripled its retail footprint. This summer it opened a second location in the former Anodyne Coffeehouse space on Nicollet Avenue. Together, the two locations encompass 4,700 square feet and 80 seats, plus patio seating in summer.

Operations manager Patrick Thomas credits the retail growth to Bull Run’s lack of pretension. “We want to be a place where we’re very inclusive, and even though this is a specialty coffee place and we have high-quality beans and milk, and process and latte art, we’re not out to make people feel stupid if they don’t know anything about a geisha varietal as opposed to some other varietal.”

Coffee shops earn their highest margins on drip coffee, but in the current landscape of connoisseur-level coffee houses—where espresso drinks are topped off with organic, locally farmed milk and a spoonful of honey from locally bred bees—higher food costs squeeze margins ever tighter. “The biggest cost, besides labor,” says Thomas, “is milk.”

While quality of ingredients varies among coffee shops, pricing is generally competitive—so the better the ingredients, the smaller the margin a given shop is making, Thomas says. That goes for food offerings too. “The food cost on pastries is about 50 percent or more.” Thomas buys pastries from Patisserie 46. “So we don’t really make any money—it’s just an add-on to the coffee.”

Labor is not what you’d think, either. Getting and keeping highly trained baristas, especially with the attention to customer service that Bull Run demands, is expensive. Traditional coffee shops often pay minimum wage, but specialty shops pay more. “When I worked at Kopplin’s,” says Thomas, “I supported a family of three on that barista wage.”

“If you have high quality, people will come to you,” says Thomas. “But if you also have community and you really focus on that, people will stay.”