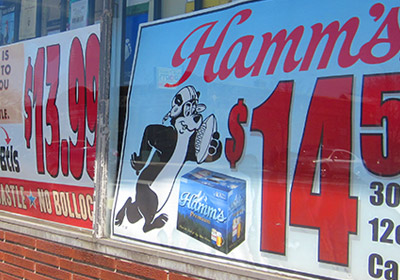 In Latest Push For Sunday Liquor Sales In Minnesota, A New Strategy

The latest effort to peel back the state’s ban on Sunday liquor sales will focus on passing legislation that would allow local governments to decide if stores can sell booze on Sunday.
December 05, 2014

DFL Sen. Roger Reinert thinks Minnesota should treat Sunday liquor sales the same way it treats its 2 a.m. bar close time. Under state law, bar owners don’t have to stay open that late — but they have the option to if they want.

In the two-term senator’s latest strategy to peel back the state’s ban on Sunday liquor sales, Reinert plans to propose legislation in the 2015 session that allows local governments to choose if they want their liquor stores to sell booze on Sunday. He’s working closely with his counterpart in the House, GOP Rep. Jenifer Loon, who carried similar legislation last year.

“I’ve always thought that was a sensible compromise and it allows us to take community norms into consideration,” said Reinert, who says the norm in his Duluth Senate district is to see many people hopping over the state border into Wisconsin, which allows Sunday liquor sales. Minnesota is one of just 12 states with a Sunday liquor sale ban still on the books.

It’s a different approach than Reinert tried last year, when he threw out a slew of different proposals to deal with the state’s blue laws prohibiting Sunday alcohol sales. The package included the local choice option, as well as the sale of so-called “growlers” by craft breweries on Sundays along with a full-blown repeal of the ban.

The idea was to throw every proposal out at once and see what stuck. The problem: nothing did.

Legislators in the state House managed to pass a bill off the floor that allowed Sunday growler sales. But that proposal was defeatedin a dramatic show on the Senate floor, which meant the House had to go back and take that provision out of their bill, too. In the end, Gov. Mark Dayton signed a fairly status-quo omnibus liquor bill.

“We just need to look at last session to see that throwing the whole spectrum of bills out doesn't really work,” Reinert said.

It’s a familiar story line at the Capitol. Every year legislators debate repealing the Sunday liquor sales ban, and every year it’s defeated by a powerful coalition of small, independent liquor stores (represented by the Minnesota Licensed Beverage Association), and the local Teamsters union, which says passing Sunday sales would re-open their contracts with other liquor stores.

Reinert says he’s hopeful Republicans taking over the state House can be spun as a positive development in terms of the Sunday liquor sale debate. Loon, who did not return calls for this story, has been an assistant leader in the House in the past, and Republican Speaker-elect Kurt Daudt has recently become supportive of repealing the ban. On the campaign trail this fall, Gov. Mark Dayton said he will sign a bill to legalize Sunday sales if it lands on his desk.

But powerful figures like the governor or a House Speaker have never come out pushing to repeal the ban, even though Reinert says it would be a smart move for any politician — polls show Minnesotans overwhelmingly support Sunday liquor sales.

Andrew Schmitt, founder of the Minnesota Beer Activists, says it’s too early to tell if anything will change for Sunday liquor sales in 2015. His group has been pushing an online campaign this fall to try and raise awareness about the issue, but the problem has always been matching the klout an influence of the MLBA and the Teamsters. “I’m hopeful it will get passed in the House,” Schmitt said. “Hopefully that leads to action in the Senate.”

He fears a push to get even the sale of Sunday sale of growlers — 64-ounce jugs that can be filled with beer, sold and taken home — will flounder again this session, given it mostly benefits metro-area craft breweries and doesn’t resonate with the entire state. It’s still early, but it’s clear the new Republican majority will have a rural-Minnesota focus.

“Growlers, that would have been a nice place to start, but we look at the state of Minnesota and it doesn’t concern the majority of consumers,” Schmitt said. “It’s a small niche in the market. It won’t serve many people outside of the metro. I don't know how hard anyone will push for it.”

GOP Rep. Joe Hoppe, the incoming chair of the House Commerce Committee, which deals with liquor bills, has voted against repealing the Sunday liquor store ban on the House floor in the past. And in 2011, chairing the same committee, he didn’t hold a hearing on the proposal to avoid attaching controversy to the omnibus liquor bill. Hoppe did not return calls seeking comment.

Despite his commitment to renew his efforts, Reinert is pessimistic. Some lawmakers may be changing their tune on the issue, but there’s never been enough momentum to turn a large number of votes at once, and the same senators who squashed Sunday liquor sales last year are still in office now.

Reinert has suggested putting the issue to the voters in the form of a constitutional amendment, but lawmakers had little appetite to do that this year, after the 2012 ballot featured two controversial amendments. But the 2016 ballot will already feature an amendment to create a council to determine legislative pay, and Reinert thinks there’s room for at least one more.

“If we fail to do anything this session of significance, you will see a significant push in 2016 to have it on the 2016 ballot,” Reinert said “This is the make or break session.”