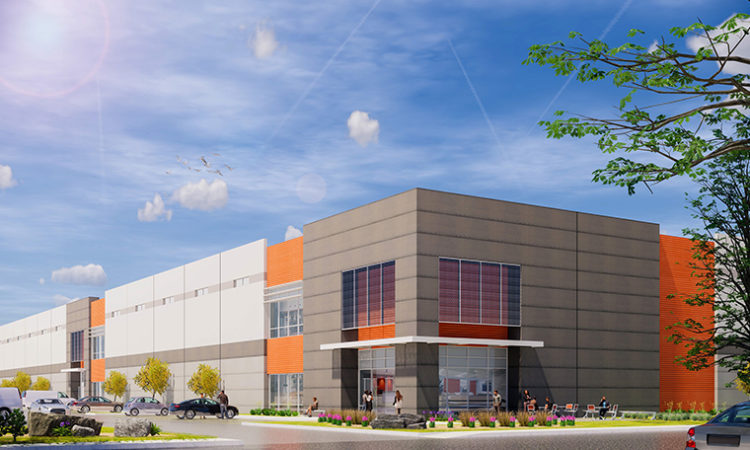 Rendering of the 2.2 million-square-foot industrial park in Aurora, Colo.

The two previously teamed up for the Northern Stacks project in Fridley.
By Burl Gilyard
February 06, 2020

Minneapolis-based Hyde Development and Golden Valley-based Mortenson are teaming up for a large industrial project in the Denver area: an eight-building, 2.2 million-square-foot industrial park on a 125-acre site. The HighPoint Logistics Park in Aurora, Colo., will break ground this year. Hyde and Mortenson, who have formed a joint venture for the project, announced the purchase of the land and the plans on Tuesday.

Hyde and Mortenson currently have another large Colorado project in the pipeline: the 1.8 million-square-foot 76 Commerce Center in Brighton, Colo. – another Denver suburb. All told, Hyde and Mortenson are planning 4 million square feet of industrial space in the Denver area. Both Hyde Development and Mortenson have offices in Denver.

Paul Hyde, owner of Hyde Development, said that the partners completed the first building in 76 Commerce Center last year and are currently constructing a second building, slated to open in June. Hyde said that 76 Commerce Center will ultimately have four or five buildings.

“We continue to see steady employment growth and population growth in Denver,” said Hyde. “We’ve learned from our Brighton project when you can find a site in an alternative submarket that has access to transportation and labor, you’re going to get traction.”

Hyde adds that many large companies – not just Amazon – have plans to build out distribution networks, and that Denver is a key location.

Hyde and Mortenson first worked together on Northern Stacks, a 1.75-million-square-foot redevelopment of a federal Superfund site in Fridley. Northern Stacks is billed as “a state-of-the-art industrial campus.” The 122-acre site is as big as the Ford plant site in St. Paul.

“All the new construction Northern Stacks buildings are 100 leased,” said Hyde. The project wrapped up late last year with the opening of the Forgotten Star brewery in a building that once housed the boiler room on the site.

Paul Hyde and his father Mac Hyde started Real Estate Recycling LLC—a company focused on redeveloping brownfield sites—in 1995. Paul Hyde had started work on the Northern Stacks projects with his father, who passed away in March 2013.

“In the spring of ’13 my dad died and I needed to find a partner to close,” said Hyde of his first joint venture with Mortenson. “That’s when we became partners.”